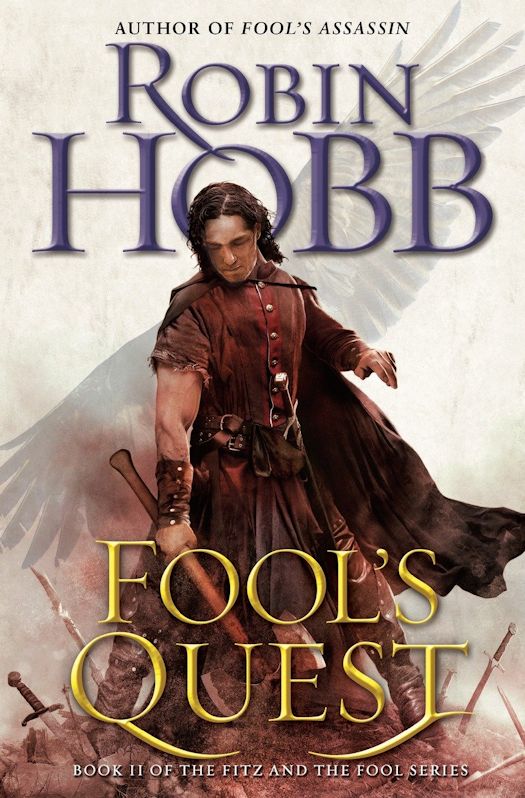 Ranking alongside George R. R. Martin as a groundbreaking master of fantasy, Robin Hobb delivers the second book in her long-awaited Fitz and the Fool trilogy.

The harrowing adventures of FitzChivalry Farseer and his enigmatic friend the Fool continue in Robin Hobb’s triumphant follow-up to Fool’s Assassin. But Fool’s Quest is more than just a sequel. With the artistry and imagination her fans have come to expect, Hobb builds masterfully on all that has gone before, revealing devastating secrets and shocking conspiracies that cast a dark shadow over the history of Fitz and his world—a shadow that now stretches to darken all future hope.

Long ago, Fitz and the Fool changed the world, bringing back the magic of dragons and securing both the Farseer succession and the stability of the kingdom. Or so they thought. But now the Fool is near death, maimed by mysterious pale-skinned figures whose plans for world domination hinge upon the powers the Fool may share with Fitz’s own daughter.

Distracted by the Fool’s perilous health, and swept up against his will in the intrigues of the royal court, Fitz lets down his guard . . . and in a horrible instant, his world is undone and his beloved daughter stolen away by those who would use her as they had once sought to use the Fool—as a weapon.

But FitzChivalry Farseer is not without weapons of his own. An ancient magic still lives in his veins. And though he may have let his skills as royal assassin diminish over the years, such things, once learned, are not so easily forgotten.

Now enemies and friends alike are about to learn that nothing is more dangerous than a man who has nothing left to lose.

Fool’s Quest is the second novel in Robin Hobb’s third trilogy* about FitzChivalry Farseer and his Fool. With just as much violence, politics, and magic as George R. R. Martin’s A Song of Ice and Fire, all of Hobb’s novels are all set in her same exotic world, which ranges from Buckkeep Holding to the Rain Wild Forest, with bonding wolves and swimming dragons. Her sword fights are realistic and well-orchestrated, and the magic of the portal travel is well constructed. She writes complex, conflicted characters who grow and change. More importantly, though, after eight novels following the same characters, she still has new things to reveal about Fitz’s world and his life.

At the close of the first novel, Fool's Assassin, Fitz had found the Fool lying in the street of a nearby town. Unfortunately, he had attacked and stabbed the Fool, seeing him only as a filthy beggar holding onto his daughter, Bee. Once he recognized the Fool, he had sent Bee home with Lant and Shun while he carried the injured through the portals back to Buckkeep for help and healing. Fool’s Quest opens with the Fool in perilous health, desperate for Fitz to travel with him back to the White Island and eliminate those who had tortured and harangued him.

For the first part of the story, Fitz himself remains totally unaware that his daughter, Bee, has been kidnapped and his home destroyed by a dangerous new enemy. It takes several chapters before he is informed of the grievous loss, and until then, he settles into royal life much as he ever had as directed by Chade. The intrigue of the royal life still remains as tangled as ever, while the King and his wife negotiate treaties and contracts with various other kingdoms. Fitz, however, remains as aloof as ever, simply playing the role of a spy in his own home, never having been thoroughly accepted by his peers and family.

Once Fitz becomes aware of Bee’s kidnapping, the story moves much more quickly. As with Fool’s Assassin, the story alternates several chapters from Fitz’s perspective with a chapter from Bee’s perspective. Through her observations and through the Fool’s storytelling, the reader becomes aware of why the Whites have stolen Bee and their intents long before Fitz himself accepts the truth.

Here is where Robin Hobb really shines. She has taken characters and scenes that she has explored in-depth at least twice and added enough spice and intrigue to make them all new again. There is a relationship between the Chaldaceans and the Whites that needs to be explained, and the Whites’ agenda must be established. Fitz must take on an entirely new role in his family, one for which he is ill-prepared by everything else that has gone on before.

In addition, Hobb’s storytelling still can bring a reader to tears. The scene where Fitz expects to be chastised for his actions and instead is helped to grieve for little Bee tore me up inside. Fitz was honored and astonished to see the new and former queen’s actions to support his grief.

In the other books, Fitz has always been able to rely upon the Fool and his mentor, Chade; yet both of these characters suffer greatly and are not expected to recover. Fitz feels he is on his own to rescue Bee. However, both Lant and the little horse boy, Perseverance, persist in their efforts to force Fitz to include them in his plans. While both are young and untried, this is an opportunity to Fitz to mentor as well.

Overall, I sped through Fool’s Quest and can hardly wait for the next novel. However, reading this story reminded me of the other two trilogies and the actions and prophecies that occurred in those. I may just have to pull out those older books and reread them while I wait.


The Fitz and the Fool Trilogy