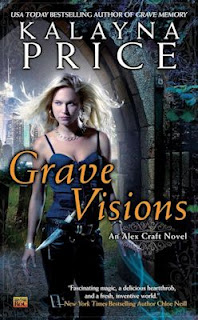 The Qwillery:  Welcome to The Qwillery. What is the most challenging thing for you about writing?

Kalayna Price:  Remembering to write the first draft for myself. Once the first draft is done I can worry about what my editor, readers, and reviewers will think, but if I get too caught up in thinking about “OMG, will everyone hate this direction I just took the story?” while getting the initial story on the page, I end up paralyzed.

KP:  I would have to say hybrid. I work from a rough outline, but if the story starts going in another direction, I give it the wiggle room to surprise me.

TQ:  Have you enjoyed returning to Alex Craft's world?

KP:  Very much so. Alex’s world is steeped in folklore, which is a passion of mine. I always enjoy working with the world. And then there are the characters. While I put them through a lot, I love writing every single one of them.

TQ:  Tell us something about Grave Visions that is not found in the book description.

KP:  Alex visits Faerie several times in this book, but each visit she finds Faerie slightly changed. Layering the world building of the land itself and the dynamics of how it changes with the situations in the book was a lot of fun that I hope readers will enjoy exploring.

TQ:  What appeals to you about writing Urban Fantasy?

KP:  Several different things. On the world building side, I enjoy working in a world that is recognizable but with a magical overlay. On the plotting side, I like the endless possibilities available to work with: add some mystery, some romance, some horror, etc. . . . anything goes. The readers of this genre are very well read and very accepting of other genre aspects in their stories.

TQ:  What sort of research did you do for Grave Visions?

KP:  Folklore books are always on the top of my research pile. I also keep on hand books on police procedure and forensics (though I deviate where the story calls for it.)

TQ:  In the Alex Craft series so far, who was the easiest character to write and why? The hardest and why?

KP:  The rather minor (thus far) character Kyran has been one of the easiest characters to write. He showed up in book two with this huge personality that just jumped off the page. I was thrilled to bring him back in Grave Visions.

The hardest characters are probably the Collectors when several appear on the page in a single scene. It is amazingly hard to have characters interact for any length of time without ever revealing their names.

TQ:  Give us one or two of your favorite non-spoilery lines from Grave Visions.


“You seeing a unicorn? Because I am.”
I nodded, dumbfounded.
“Then it can’t be a unicorn because you sure as hell aren’t a virgin.”

KP:  I’m currently working on the fifth Alex Craft novel—there is a short preview of it in the end of Grave Visions, so I hope you’ll check it out.

KP:  Thank you for having me! 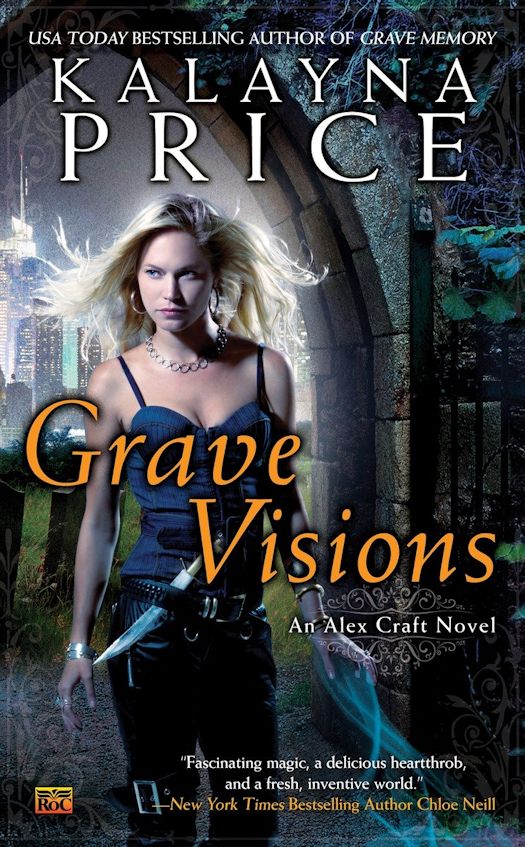 The USA Today bestselling author of Grave Memory and Grave Dance returns with her bewitching heroine Alex Craft in a new novel of twisting urban fantasy where the secrets of the dead can wreak havoc on the living.

If you want to hear voices from the dead in Nekros City, you call Alex Craft. She’s a grave witch with reasonable rates and extraordinary powers who specializes in revealing the secrets of the dead. But she has her own secrets. She’s not human—and her newly discovered heritage is causing havoc for her both in the human realm and in Faerie.

Fae can’t survive without a tie to Faerie, and now that Alex’s true nature has awoken, she’s no exception. She must align herself to a court and soon. To retain as much freedom as possible, she makes a deal to track the source of a new glamour-infused street drug which causes hallucinations that kill—and not just the user. Her investigation entangles Alex in a conflict brewing in Faerie, and she must find answers before she’s dragged so deep that she loses not only her freedom, but her life. 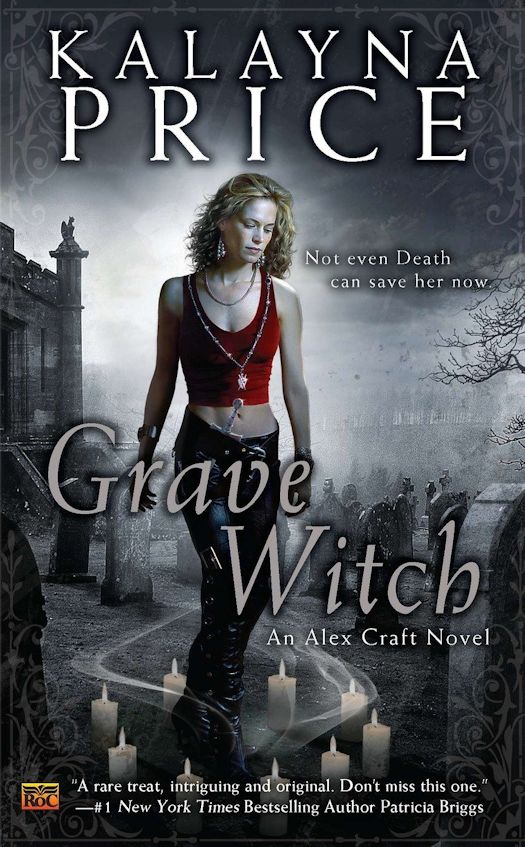 Not even death can save her now.

As a grave witch, Alex Craft can speak to the dead-she’s even on good terms with Death himself. As a consultant for the police, she’s seen a lot of dark magic, but nothing has prepared her for her latest case. When she’s raising a “shade” involved in a high profile murder, it attacks her, and then someone makes an attempt on her life. Someone really doesn’t want her to know what the dead have to say, and she’ll have to work with mysterious homicide detective Falin Andrews to figure out why… 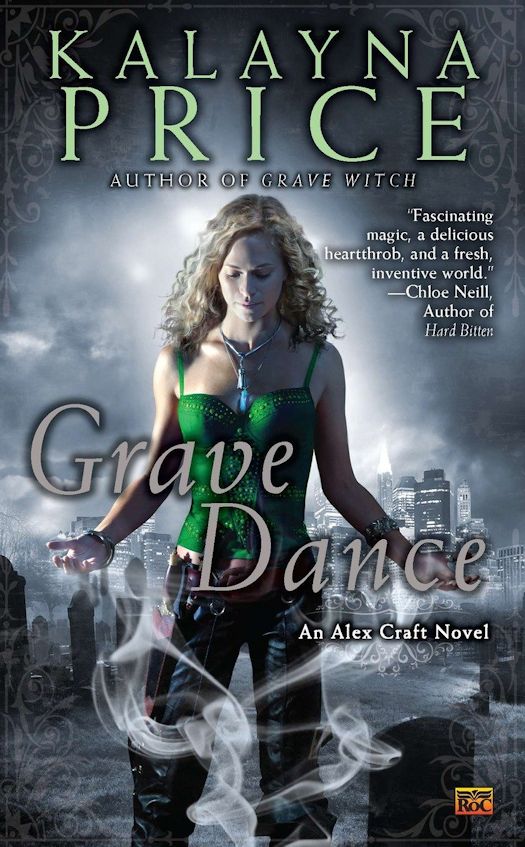 After a month of down time, Grave Witch Alex Craft is ready to get back to solving murders by raising the dead. With her love life in turmoil, Alex is eager for the distractions of work. But when her new case forces her to overuse her magic, it might be the last mystery the Grave Witch ever gets to solve… 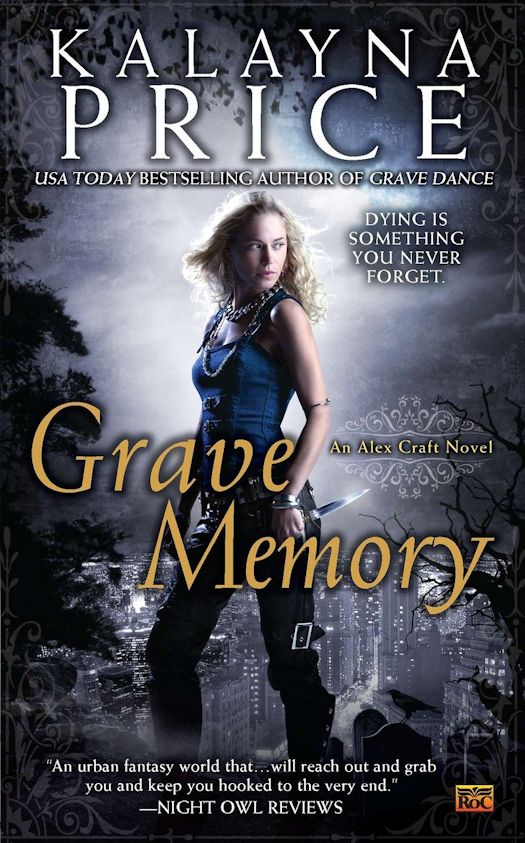 When the dead need to talk, Alex Craft is always ready to listen…
As a Grave Witch, Alex solves murders by raising the dead—an ability that comes at a cost, and after her last few cases, that cost is compounding. But her magic isn’t the only thing causing havoc in her life. While she’s always been on friendly terms with Death himself, things have recently become a whole lot more close and personal. Then there’s her sometime partner, agent Falin Andrews, who is under the glamour of the Winter Queen. To top everything off, her best friend has been forever changed by her time spent captive in Faerie.

But the personal takes a backseat to the professional when a string of suicides occur in Nekros City and Alex is hired to investigate. The shades have no memory of the days leading up to their brutal endings, so despite the very public apparent suicides, this is murder. But what kind of magic can overcome the human will to survive? And why do the shades lack the memory of their deaths? Searching for the answer might mean Alex won’t have a life to remember at all… 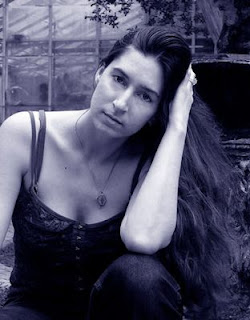 Kalayna Price has always been an avid reader and dreamer. At ten she raided her father's fantasy fiction bookcase and her already active imagination went into hyperdrive. Her first love was for the epic adventures and mythical races and creatures of high fantasy, but she has always been drawn to things that go bump in the night. It is that darker side of fantasy where she currently devotes her words.

Kalayna is the USA Today Bestselling author of two dark urban fantasy series: the novels of Haven and the Alex Craft novels, both of which have been translated into several languages and are available all over the world.

The Haven Novels, consisting of ONCE BITTEN (January 2009), TWICE DEAD (February 2010), and THIRD BLOOD (August 2012), follow the story of Kita Nekai, a kitten shapeshifter on the run from her clan and responsibilities, who is turned into a vampire and entangled in the supernatural underworld. The Alex Craft novels consist thus far of GRAVE WITCH (October 2010), GRAVE DANCE (July 2011), and GRAVE MEMORY (July 2012). The novels follow series title character, Alex Craft, who is a broke magic-eye for hire who speaks to the dead. In the first book, Grave Witch, a case with a sexy reaper, a dark cop, and a ghost-silencing killer has more than Alex's rent on the line—it may cost her soul.

Kalayna draws her ideas from the world around her, her studies into ancient mythologies, and her readings of classic folklore. Her stories contain not only the mystical elements of fantasy, but also a dash of romance, a bit of gritty horror, some humor, and a large serving of mystery.

When not writing, she can be found reading for both pleasure and research, locked in her studio with a paintbrush, out in nature with her camera, or just about anywhere with a hula-hoop. Yeah, you read that correctly. Kalayna thinks hoop dance is about the most entertaining form of exercise on the planet, and has been known to hoop with fire.