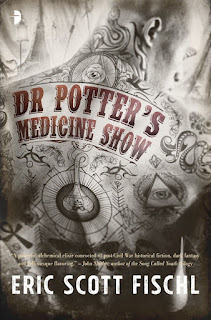 Eric:  I started in my early twenties, in an on and off again sort of way, that I kept mostly top secret. Now I'm extremely old, so it's been a while. As to why I started, I've always been a creative type and writing was what I was best at and books have always been the thing I love most in the world. It's a lot of work, writing, and oftentimes not particularly enjoyable, but oh my is it satisfying when you make something you're proud of.

Eric:  A hybrid; the best term for my style that I've heard is “quilter” (I didn't invent the term, BTW). By which I mean I rough out the very broad strokes from start to finish before starting to type, and then stitch those panels of character/plot together as I go. Also, working toward the “finish” usually means “a finish”, not “the finish”, as the stitching generally takes me off course as I work.

Eric:  It's all challenging, in both good ways and bad. I think the thing I find the most challenging, though, or at least the thing that I spend the most time fretting over, is getting characters to the point where they seem entirely three-dimensional and believable, where they stand on their own and do what they would do, not what just I think they would do. I want even the most repellent characters to act for reasons that make sense and are coherent to who they are, which can be tough. When I'm reading for pleasure, I'll put down the best-plotted book in the world, if I don't give a damn about the characters. Character can carry a story a long way, if the reader is invested in them.

Eric:  It's mostly books … I'm a very boring person and that's what I do with most of my time: read.

Kind of a follow-up to the previous question, then, the books I generally enjoy the most are because of their characters; people in the micro rather than ideas in the macro. Not to say that I don't enjoy books that are more focused on bold, sweeping ideas, but I find that I'm more drawn in by people, and how people relate to their circumstances. That said, a few examples of the writers who've influenced or influence me: David Mitchell is about my favorite living writer because he does characters like no one's business. Iain Pears takes structure to another level, with these intricate, intertwining stories that aren't just fluffy expositions of technique. Somerset Maugham was an amazingly observant type of writer: he was fantastic with small, quiet details that make me try to pay more notice to that sort of thing.

Eric:  A 19th-century medicine show travels the West, hiding a dark secret and selling a cure-all tonic that, for some, is a fate worse than death.

TQ:  Tell us something about Dr Potter's Medicine Show that is not found in the book description.

Eric:  It's perhaps implied in the book description, but there is a freakish component to the Medicine Show; in addition to strongmen and musical prostitutes and fortune tellers, there are gaffes, wonders of nature, and some horrible things that are kept in a locked black tent which is only opened after dark. These horrible things may or may not be a plot point ...

TQ:  What inspired you to write Dr Potter's Medicine Show? What appeals to you about writing Alternative History?

Eric:  I really liked the idea of the setting: a shabby circus, of sorts, peopled by downtrodden, criminal characters whose moral compass is slightly shaky at best, most of them. There's just something that's fun about that sort of seedy environment. As to the appeal of alternative history: First off, I'm a history nerd, and there's a very satisfying challenge to taking the framework of “OK, this is what was happening and this is what people were probably like” in a given time/place, and then twisting a story to fit that framework. The history in this book is “alternative” in less of a “but what about if this happened, how would things downstream have changed” than using a particular time and place as the basis for a story that has fantastical elements to it. It's a different type of creative challenge, trying to work around an existing framework than just making an entire world from scratch.

TQ:  Why did you set the novel in the Pacific Northwest?

Eric:  I lived in Portland for many, many years. I'm very familiar with the setting, then, and in 1878 there was still the tail end of a hardscrabble early-settler existence in that part of the world (once one got out of the cities), which I liked as part of the setting. Another thing that was a slam-dunk is the fact that it rains for about nine months out of the year in the Pacific Northwest and I wanted an oppressive, dreary setting for the book, because of the types of characters that are in it and the things they're doing. Rain makes me really crabby, which is why I live in Montana now.

TQ:  What sort of research did you do for Dr Potter's Medicine Show?

Eric:  I did quite a bit, mostly reading up more on of the history of the time: about medicine shows and the patent medicines in general, the history of Portland and the NW, and then a lot about the history of alchemy. It's easy to rabbit-hole down any of those topics; sometimes you find one minor detail that you can't really understand until you've gone through several other things. It's a lot of fun.

Eric:  Oh, I love that cover. I think I fretted more about having a book with a bad cover than I did ever selling the book in the first place, and Angry Robot did a fantastic job with the design. The artist is the very talented Steven Meyer-Rassow, who has done a stylized version of Oliver Wilson, The Black Hercules, who is the strongman in the Medicine Show and the best friend of Dr Potter. He's stylized in that, in the book, he has no tattoos, but I think it was a very clever choice of how to call out to some of the alchemical and fantastical elements in the book. And no, for the last time, I can't get the hunky cover model's phone number, so please stop asking me, ladies.

TQ:  In Dr Potter's Medicine Show who was the easiest character to write and why? The hardest and why?

Eric:  The easiest character by far to write was Lyman Rhoades, the villain, who is an absolutely abhorrent human being. As to why, it was just easy to imagine the kinds of terrible things a person would do, if one had absolutely no morals and was driven entirely by his own desires. That probably says something awful about me as a person, but there you go. The hardest characters were Dr Potter and Oliver Wilson: they're essentially moral and good-hearted people, but they also needed to be weak and pathetic and slightly repellent in their own ways, and yet still the kind of characters that you want to root for and have hope for. It was a real challenge to balance those things.

TQ:  Which question about Dr Potter's Medicine Show do you wish someone would ask? Ask it and answer it!

Eric:  So Fischl, was there any character or scene that you liked, but had to cut from the book for purposes of story?

Well, person who is in no way me, yes there was. Earlier versions of the book had much more exposition of two characters: Ah Fan, the fortuneteller, and Ridley, the shill. Fan, in particular, had a story that I quite liked, about the fact that he knew himself to be a charlatan and was just particularly good at reading people. But then, in a moment of drama, he actually has a real, terrifying oracular vision about coming events. As a story, it worked pretty well, but it just didn't fit in with what was going on in that section and so it got the editorial knife.

TQ:  Give us one or two of your favorite non-spoilery quotes from Dr Potter's Medicine Show.

Eric:  Even more so, these days:

“Hope is the most precious thing in this world, Castle. Don’t let anyone tell you otherwise. Wealth, love, good health: they are all less than worthless if hope is taken from you. You must never let go of that precious thing. You must hold hope tight to yourself, Mr Castle.”

And this just makes me laugh, for some reason:

“There are few things more foolish-looking than a fat man on a skinny horse, Oliver thinks. Man looks like a pumpkin on a fence rail.”

Eric:  The Trials of Solomon Parker will be coming out from Angry Robot in November. It's related to Dr Potter's Medicine Show, but it's not a sequel and is a very different kind of story. Here's the book jacket blurb:

This is Butte, Montana in 1916, the Richest Hill on Earth: a metal-fueled boomtown of industry, pollution, labor unrest, vice, and crime. The Gibraltar of Unionism, where a man can get a fair wage for fair work, or maybe get himself killed down the mine, one way or another. Butte, where fortunes are made. The city of the Copper Kings.

Solomon Parker, broke, busted down, and in debt to the wrong sorts of people, wishes his life could have turned out differently. Lately, he's always one step ahead of his last bad decision, the wrong bet, but those steps are getting shorter.

Little does he know that, soon enough, he and his young protégé, Billy Morgan, a man caught between two cultures, will get the chance to change their lives.

The Above Ones, the gods of the People, are bored. Marked Face, their servant, is coming, and he's bringing his dice.” 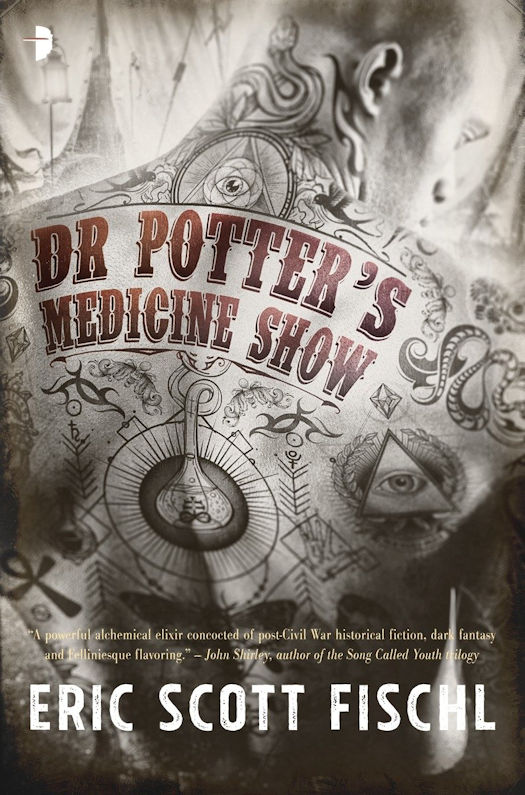 Dr. Alexander Potter, disgraced Civil War surgeon, now huckster and seller of snake-oil, travels the wet roads of the Pacific Northwest with a disheartened company of strongmen, illusionists, fortunetellers, and musical whores. Under the quiet command of the mysterious, merciless, and murderous Lyman Rhoades, they entertain the masses while hawking the Chock-a-saw Sagwa Tonic, a vital elixir touted to cure all ills both physical and spiritual… although, for a few unfortunate customers, the Sagwa offers something much, much worse.

For drunken dentist Josiah McDaniel, the Sagwa has taken everything from him; in the hired company of two accidental outlaws, the bickering brothers Solomon Parker and Agamemnon Rideout, he looks to revenge himself on the Elixir’s creator: Dr. Morrison Hedwith, businessman, body-thief, and secret alchemist, a man who is running out of time.

File Under: Fantasy [ The Secret Tradition | Chemical Imbalance | Hustlers Hustled | The Carnival is Over ] 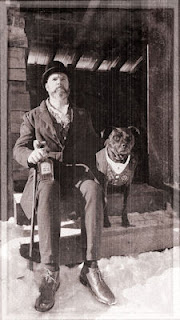