Interview with Keith Rosson, author of The Mercy of the Tide


Please welcome Keith Rosson to The Qwillery as part of the 2017 Debut Author Challenge Interviews. The Mercy of the Tide is published on February 21st by Meerkat Press. 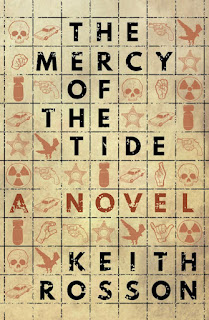 Keith:  Thanks so much! I started out doing punk zines in the mid-‘90s, when I was in art school. Y’know, those who can’t play instruments, write. The zine was dorky anecdotal stuff, record reviews, interviews with bands. Eventually that morphed into more personal creative nonfiction stories. Meanwhile, I wrote my first incredibly bad novel at 20, my second slightly better one at 27 or so, and in my mid-thirties wrote one that was pretty solid and will be published next year. Then I wrote The Mercy of the Tide. I’ve also been kicking out short stories for the past six or seven years or so, which I probably love more than novel writing, though there’s something alluring about the huge emotional brain-drain that writing a full length book takes. And I’ve always been a ferocious reader, something I personally think is integral to being even a half decent writer.

Keith:  That’s a good question. I generally plot a few chapters ahead – and by plot, I mean I have a very rough idea of what’s going to happen. I’ve tried plotting out larger, more extensive chronologies and it’s just no fun; I eventually find myself struggling to adhere to earlier plotlines when what I really want to do is take it in a new direction that I’ve come up with after I’ve already penned the original plot. You know? So yeah, I like to have a general idea of the book’s direction, with maybe a line or two laying out a few future chapters, but that’s about it. I also have a separate doc that I refer to full of locations, names, bios of characters, important plot points and facts, and reminders. For example, in this new novel I’m working on, I have about three dozen bulletpoints that say things like this:
When you work on a bigger piece, there’s a lot of things to keep in the air, a lot of moving parts. I’m constantly referring to my notes. So I guess I’d say I’m mostly a “fly by the seat of my pants” guy, with moments of mild plotting.

Keith:  Writing. Quite the hot take, right? The actual act of getting past the trepidation and uncertainty and distractions and fear of failure and sitting my ass down in front of the computer and getting to work, that’s the most difficult thing. Once I make it there it’s almost always great, and I almost always remember how much fun it is to write. But first I have to move past that nattering voice that tells me I won’t be able to do it, that today will be the day that I freeze up, that this’ll be the day that I will just bomb. I’m writing my fifth novel and have written dozens of stories, and ignoring that voice and getting to work is still the biggest challenge.

Keith:  Reading. One of the most significant tools a writer can have is a joy of reading. It helps us hone our craft, shows us by both good and bad example, offers a sense of solace, transports us – at least to me personally. While I try very hard not to be directly influenced by the current books I’m reading, there’s no refuting that being a voracious reader has helped me find my own voice and themes throughout the years. Honestly, I’m a little wary of writers who aren’t big readers too.

TQ:  Describe The Mercy of the Tide in 140 characters or less.

Keith:  In 1983, members of a small coastal town recuperate from loss as Cold War tensions rise and some unnamed monster terrorizes the community.

TQ:  Tell us something about The Mercy of the Tide that is not found in the book description.

Keith:  The hands on the cover of the book spell out M-E-R-C-Y in American Sign Language, a hidden nod to the fact that one of the main characters is deaf.

TQ:  What inspired you to write The Mercy of the Tide? Why a genre-bending novel?

Keith:  Well, without giving key plot points away, I’ll just say that it started out as an entirely different book. It was still an alternate history novel, but the first attempt was set in present day. I kept coming up against particular roadblocks in the story – “How did this particular event actually happen? Why are certain people acting like this?” Long story short, I found that I was backtracking a lot to fill in a lot of foundational stuff surrounding the story I wanted to tell, and a lot of world-building, and it just reached the point where it was obvious I needed to tell the back story first. So I started from the beginning, which turned out to be in 1983. But originally it was a whole different book.

TQ:  What sort of research did you do for The Mercy of the Tide?

Keith:  An incomplete list: nuclear yield of various Cold War-era ICBMs, American Sign Language, Europe’s role in the 1980s stalemate between Russia and the US, educational options for deaf children in rural Oregon during that time, mythology of Native American tribes of the Oregon coast, the Indian Wars of the 1850s, Hinckley’s assassination attempt of Ronald Reagan, to name a few. Fun! I seriously do love the research aspect of novel writing.

TQ:  Please tell us about The Mercy of the Tide's cover. Does the cover depict something from the novel?

Keith:  It totally does! It’s essentially a grid pattern of various visual elements of the book. A Sheriff’s badge, a gun, a bird, a skull, etc. They’re all indicative of key characters and plot points in the novel. I was fortunate enough to be able to design my own cover, and I’m really happy with how it turned out.

TQ:  In The Mercy of the Tide who was the easiest character to write and why? The hardest and why?

Keith:  I’d say the teenaged kid Sam was the toughest to write. It’s hard to remember the torpor and angst I held as a high school kid, though I know I had a toooon of it. It was tough to try to pull that off convincingly and also run Sam’s character through the lens of someone who has just lost his mother and is trying his best, in spite of his age and limitations, to take care of his sister. Meanwhile, I took a dark pleasure from writing about the mental and physical unraveling of Hayslip, the sheriff’s deputy, though one or two scenes specifically were pretty tough to write, as he’s kind a tumbling shipwreck of a guy who doesn’t make the best choices. Though to be honest none of the book was particularly easy, per se.

TQ:  Which question about The Mercy of the Tide do you wish someone would ask? Ask it and answer it!

Keith:  I feel pretty happy with the questions that folks have asked about the book. I get a lot of folks asking if there will be a sequel or not, and all I can really do is pensively rub my chin for a moment and then point over the person’s shoulder and say, “Hey, look! A puppy!” And when they turn back… I’m gone. Oh, and I did know a kid named Todd who went by Toad, the same as in the book, though the similarities stop there.

TQ:  Give us one or two of your favorite non-spoilery quotes from The Mercy of the Tide.

Keith:  Honestly, I’m not even sure about apt quotes, but one of my favorite aspects of the book is when people begin to recognize the minute differences of this world compared to ours. The reader isn’t made aware of the differences right away, but there are little kernels lining the path throughout. One of my particular favorites is that Trina, a 9 year-old deaf girl and one of Mercy’s main characters, adores Judy Blume novels. Loves em. But in Mercy, she’s very excited about the new (as of 1983) Blume book that’s just been published, The Wolf In the Basement, which of course is entirely made up and doesn’t actually exist. But the publisher and I wrote Blume a huge fan latter and she was totally cool with me fictionalizing her stuff and making up books she’d never actually written. That’s just one little tidbit among many, but I love it so much.

Keith:  Meerkat Press, the publisher that’s worked their ass off getting Mercy out there, will be publishing my second novel, Smoke City, in early 2018. Really excited for that. Meanwhile, I’m writing a book about a crypto zoologist and his reluctant assistant investigating a unicorn sighting off the coast of Iceland. So, you know, staying topical and whatnot.

Keith:  Oh, goodness, thanks for the opportunity, I really appreciate it. 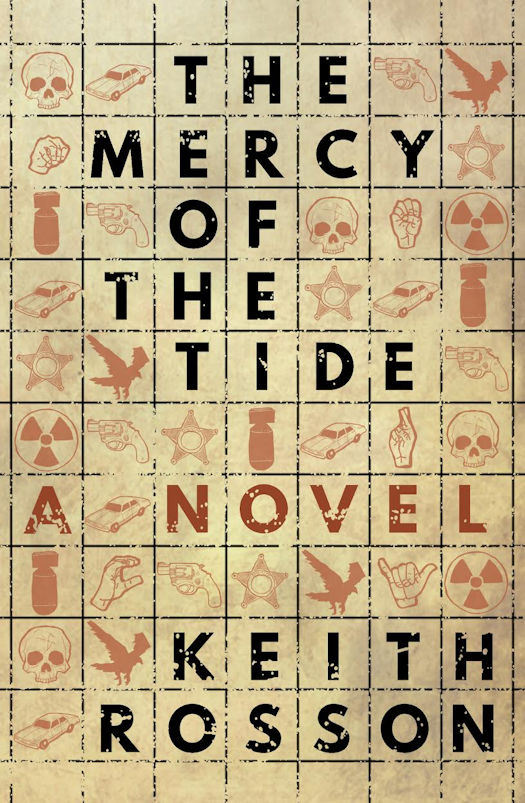 Riptide, Oregon, 1983. A sleepy coastal town, where crime usually consists of underage drinking down at a Wolf Point bonfire. But then strange things start happening—a human skeleton is unearthed in a local park and mutilated animals begin appearing, seemingly sacrificed, on the town’s beaches. The Mercy of the Tide follows four people drawn irrevocably together by a recent tragedy as they do their best to reclaim their lives—leading them all to a discovery that will change them and their town forever. At the heart of the story are Sam Finster, a senior in high school mourning the death of his mother, and his sister Trina, a nine-year-old deaf girl who denies her grief by dreaming of a nuclear apocalypse as Cold War tensions rise. Meanwhile, Sheriff Dave Dobbs and officer Nick Hayslip must try to put their own sorrows aside to figure out who, or what, is wreaking havoc on their once-idyllic town.

Keith Rosson paints outside the typical genre lines with his brilliant debut novel. It is a gorgeously written book that merges the sly wonder of magical realism and alternate history with the depth and characterization of literary fiction. 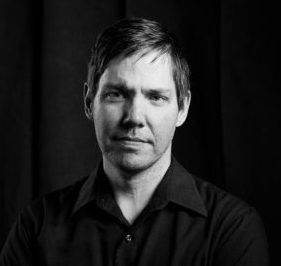 Keith Rosson’s fiction has appeared in Redivider, Cream City Review, PANK, The Nervous Breakdown, and more. He is the author of The Best of Intentions: The Avow Anthology, an omnibus collection of his long-running punk fanzine, Avow, as well as an illustrator and graphic designer, with clients that include Green Day, Against Me, the Goo Goo Dolls, and others. An advocate of both public libraries and non-ironic adulation of the cassette tape, he can be found at keithrosson.com.

The Mercy of the Tide - Keith Rosson - Book Excerpt