Excerpt: The People's Police by Norman Spinrad - and Giveaway


The Qwillery is delighted to share with you an excerpt from The People's Police by Norman Spinrad. 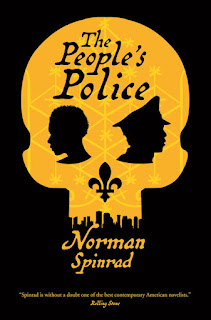 
Some folks are still bitching that the Eternal Mardi Gras is a Disney version, what with the traditional Krewes’ parading limited to the traditional lead-up to Fat Tuesday while the big budget corporate floats from Hollywood, Bollywood, and Pornywood parade all year, all long, all over New Orleans, which is sort of true, given that it was Disney I brought in first.

But whining that the Mouse has gone and done to the French Quarter what it did to Times Square, and oozed out into the rest of New Orleans like the annual dose of mud during the Hurricane Season, and calling yours truly, Jean-Baptiste Lafitte, a swamp rat traitor to the true soul of the city is going a tad too far, seeing as how the Quarter had fallen far off its fabled glory days even before Katrina.

You expect me to apologize for saving the city from drowning to death?

Everyone knows New Orleans had been on its economic ass for decades, barely able to pay the cops to keep the Swamp Alligators down in their lowlands swamps and out of the New Orleans Proper high grounds.

And the Hurricane Season wasn’t going away, now was it, and what the Dutch were demanding in order to save what was left of the Big Easy from finally going under would’ve been about the total budget of the city government for the next decade or two. No high-priced, high-tech Hans Brinker seawalls and solar windmill pumping stations back then, need I remind you?

Amazing what short memories ingrates have.

New Orleans featured itself as the Big Easy since before Mickey Mouse was even a gleam in Uncle Walt’s evil eye, but just because the truth wouldn’t look so good in the tourist guides doesn’t mean we don’t all know that it’s always really been the Big Sleazy, now does it?

This city was making its living as a haven for pirates and slavers and the riverboat gamblers, saloon keepers and whorehouse impresarios like yours more or less truly, rollers high, low, and medium, who serviced their trade since before the Louisiana Purchase.

The Big Easy was born as the Big Sleazy. Easy?

Born between a bend in the mighty and mighty ornery Mississip and a briny marsh presumed to call itself Lake Pontchartrain serving as an overflowing catch-basin for tidal surges when the major hurricanes hit and a giant mud puddle in-between.

First built precariously on the natural levees of the Mississippi, expanding greedily and stupidly into the back swamps. Tossed around like a beachball between the French and the Spanish. Finally sold to the Americans by Napoleon on the cheap because he knows he’s gonna lose it to the British anyway if he doesn’t. Flooded every few decades even before Katrina, before there even was an annual Hurricane Season, squeezing what remained onto what high ground was left to it after the sea level rose. The population cut almost in half, forced to live off the tourist and entertainment trade alone when the Gulf oil dried up, just about surrounded by the Alligator Swamp and what crawled up out of it if its back was turned.

You call that Easy?

Those who adapt survive, like the Cajuns from icy Quebec said when they found themselves in the steamin’ bayous of the Delta, like the Alligator Swamp nutria hunters turning a plague into protein. Those who don’t ain’t been heard from lately. So making legal what the Big Easy always was to pull our terminal condition from the mud is not “selling out the soul of the city” or “whoring ourselves to the mavens of show business.”

Because the Big Easy has always been a whore, a charming, sleazy, free-wheeling, good-natured hooker with a heart of gold and an eye for the main chance, which is what makes her easy, and bein’ easy is the name of the game in this business, which has always been the main game in town. And let an old bordello impresario tell you, who would ever hire a hooker who wasn’t all of the above, and good-lookin’ too?

In case you’re forgetting, the Big Easy wasn’t exactly looking as appetizing as a platter of Oysters Bienville back in the day before Mama Legba and Her Supernatural Krewe. She’s all spiffed up and lit up and giving herself the star treatment now, to the point where ingrates and ignoramuses and Creole romantics looking back over their shoulders can afford to complain about how New Orleans is peddling her previously jazzy derrière to less than the genteel bohemian trade of their absinthe fantasies.

Whoever wrote that song about there being no business like show business sure got it wrong. As things stand now, there’s no business but show business and we all are in it. Not that we haven’t always been. The only difference now is that it’s making the good times roll again after all those years in the deep dark shit, and that’s good enough for me, and if it’s not good enough for you, this ain’t your town, you’d best leave and go somewhere more to your tight-assholed liking.

But y’all come back on vacation from the salt mines, y’hear! Whatever your pleasure, we got it, and if we don’t, don’t worry, no matter how pervo it may seem to your sweaty vestigial morality, we’ll get it for you. Here in the Eternal Mardi Gras of the Big Easy, we make no such judgments, we’re impossible to scandalize, de gustibus non est disputandum.


What pays here, stays here, and never fear, we do still want your money. 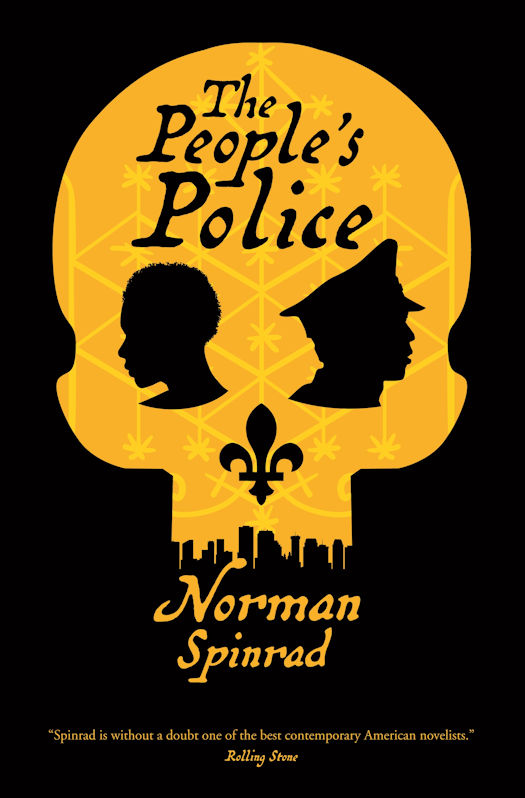 Norman Spinrad, a National Book Award finalist for his short fiction collection The Star-Spangled Future, has now written The People's Police, a sharp commentary on politics with a contemporary, speculative twist. Martin Luther Martin is a hard-working New Orleans cop, who has come up from the gangland of Alligator Swamp through hard work. When he has to serve his own eviction notice, he decides he's had enough and agrees to spearhead a police strike.

Brothel owner and entrepreneur J. B. Lafitte also finds himself in a tight spot when his whorehouse in the Garden District goes into foreclosure. Those same Fat Cats responsible for the real estate collapse after Katrina didn't differentiate between social strata or vocation.

MaryLou Boudreau, aka Mama Legba, is a television star and voodoo queen—with a difference. The loa really do ride and speak through her.

These three, disparate people are pulled together by a single moment in the television studio when Martin, hoping for publicity and support from the people against the banks, corporate fat cats, and corrupt politicians. But no one expects Papa Legba himself to answer, and his question changes everything.

"What do you offer?"

Norman Spinrad is a science fiction icon and the author of more than twenty novels which have been translated into over a dozen languages. His 1969 novel, Bug Jack Barron, was nominated for the Hugo and Nebula Awards and his short fiction collection, The Star-Spangled Future, was a National Book Award finalist. He has also written screenplays for American television series, including the original Star Trek. He lives in Paris. For more information, visit normanspinradatlarge.blogspot.com.

What:  Two copies of The People's Police by Norman Spinrad from Tor Books. US / Canada Only

Who:  The giveaway is open to all humans on the planet earth with a US or Canadian mailing address.

When:  The giveaway ends at 11:59 PM US Eastern Time on February 17, 2017. Void where prohibited by law. No purchase necessary. You must be 18 years old or older to enter.