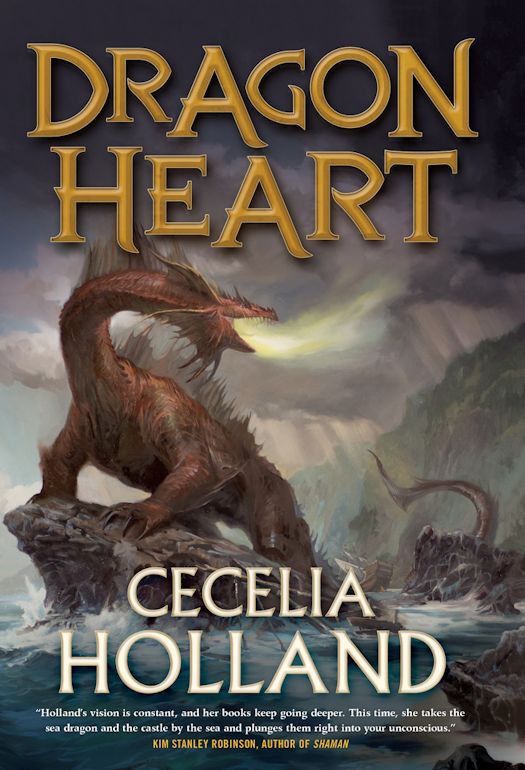 Where the Cape of the Winds juts into the endless sea, there is Castle Ocean, and therein dwells the royal family that has ruled it from time immemorial. But there is an Empire growing in the east, and its forces have reached the castle. King Reymarro is dead in battle, and by the new treaty, Queen Marioza must marry one of the Emperor's brothers. She loathes the idea, and has already killed the first brother, but a second arrives, escorted by more soldiers. While Marioza delays, her youngest son, Jeon, goes on a journey in search of his mute twin, Tirza, who needs to be present for the wedding.

As Jeon and Tirza return by sea, their ship is attacked by a shocking and powerful dragon, red as blood and big as the ship. Thrown into the water, Tirza clings to the dragon, and after an underwater journey, finds herself alone with the creature in an inland sea pool. Surprisingly, she is able to talk to the beast, and understand it.

So begins a saga of violence, destruction, and death, of love and monsters, human and otherwise.

In Dragon Heart, Cecelia Holland, America's most distinguished historical novelist steps fully into the realm of fantasy and makes it her own.

I was really looking forward to this book. I'm a hug fan of historical fiction and was excited to see how Cecelia Holland would translate her skills into writing a fantasy story. From the back cover description I got the idea that Holland was looking to modernize a fairytale with the talk of a sea side castle, princess, princes and dragon. Sadly, I was disappointed.

Holland does a wonderful job at creating atmosphere and world-building for her story. I enjoyed getting wrapped up in her evocative descriptions--the 'haunted' castle was my favorite part of the book. However, I did find some of her names for people and places a bit boring, almost as if they were placeholders that were never properly named. The best example is Castle Ocean, I cringed every time I read it.

The characters started out interesting and compelling but I quickly lost interest in them as the story progressed. I never felt engaged with their struggles or desires. Holland focused on far too many characters for me to find one that I liked and felt satisfied knowing. There's the Queen, her five children, as well as the antagonist and some villagers. For such a small book, less than 300 pages, I think there were too many POV characters. Even the dragon that starts out strong in the beginning fades away until later, and his relationship with Tirza was far too familiar. It became uncomfortable.

Holland's Dragon Heart is a boring fairytale. She attempted to modernize it and give it a Game of Thrones feel with so many POV characters, but unfortunately it came out weak and strange at times. Although there isn't an issue with language, there are acts of violence and minor sexual situations involving a dragon's tongue so it would only be appropriate for adults.