Please welcome Leigh Perry to The Qwillery. The Skeleton Haunts a House was published by Berkley on October 6, 2015. It's the 3rd novel in the fabulous Family Skeleton Mystery series. 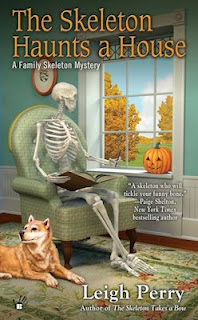 How to Write a Haunted House; Or How to Haunt a Mystery
By Leigh Perry
Early on in the process of writing The Skeleton Haunts a House, I decided it was going to be set in and around a haunted house—meaning the Halloween season kind with fake ghosts and gore, not actual spirits. So I did a fair amount of research into how a haunted house is put together and run. Not only did I want to get the background details and jargon right, I actually wanted to lay out my fictional haunted house so I could bring it to life. (Not quite in a mad scientist bringing the monster to life kind of way, but sort of like that.)

I worked in a haunted house myself back in high school, and my original plan was to have my fictional house set up the same way, with random creepy sets and costumed spooks throughout the house. It turns out that industry standards have evolved a great deal since then. These days a haunted house is very much a carefully designed experience.

The starting point is the venue. Is it an old house, a theater, a cornfield, a amusement park, a hayride, or even an abandoned location like a hospital or prison. You can haunt just about anything. The best haunted house venue I’ve ever heard of is Burg Frankenstein, near Darmstadt in Germany. It’s rumored to have been an inspiration for Mary Shelly’s book Frankenstein, and there’s been a Halloween festival there since 1978.

Since my book was going to be set in Pennycross, a small Massachusetts college town, I couldn’t legitimately plant a set of castle ruins in the middle of town, or even on the outskirts. Instead I decide to sneak in an unused class building onto the grounds of McQuaid University, where my protagonist Georgia Thackery works. To give it some gravitas, I called it McQuaid Hall, but for Halloween, it becomes McHades Hall.

Once the venue is set, I gave my haunted house a theme. You see, the really modern haunted houses have themes that inform the details of the designs. I could have gone with haunted toy store, creepy carnival, post-apocalyptic nightmare, insane asylum, hospital of the damned, and on and on. Since I already had an academic setting, I ran with that: McHades Hall would be college-themed. (The fact that my daughter is starting to look at colleges had no influence in my view of a campus as intensely frightening.)

Even with a creepy college as a starting point, I had plenty of latitude to put together the actual scare areas and to staff them with a wide variety of scare actors. (Scare areas and scare actors are industry terms, but they’re pretty self-explanatory.) This is where I got a little fast-and-loose with the themes. I mean, for history classes I had Countess Bathory, the Black Death, and Jack the Ripper. Technically historical, but not what I studied in college. (Though Harvard used to have a great class about the repercussions of the Black Death.) For English, it was characters from The Exorcist, The Shining and Psycho. Good books to be sure, but probably better known for And I never had one single chemistry prof turn into a werewolf. (Of course, I only had daytime chem lab...)

Of course, scare actors don’t just stand around and look horrifying. They have to be doing horrifying things. The zombie frat boys have to chase you, the cannibalistic cafeteria workers have to threaten you, and if anybody is just standing around, it’s a trick to lull you into a false sense of security until they jump at you. While there’s a certain amount of ad-libbing for the scare actors, in general they do have lines to say and blocking, as in any kind of theater.

Of course, all that stuff is what the customers see. (I was hoping to find an industry-specific name for people-who-come-through-haunted-houses, but customer is all I could find. Couldn’t they at least be scare customers?) Since I wanted some behind-the-scenes plotting, I had to figure out what it looks like behind the scenes. That’s when I found out that most haunts have a host of hidden paths and passages to get around the house. They line the rooms with a fabric called scrim, so they can hide behind and look out, but you can’t see them. Now that is mystery-writing gold!

For the final touch of authenticity, I used some of the wisdom accumulated by hundreds of scare actors.

Watch out for hitters! Apparently some people lash out when they’re frightened.

If you hear somebody’s name, tell the other scare actors so they can use it. It’s scary for anybody in a zombie suit to chase you, but even worse when they make it personal.

Never do a gag with a noose. People have died that way. That is not an urban legend. Scare actors have accidentally strangled themselves.

Nobody can resist a chainsaw. Apparently the bravest of customers is prone to losing it when somebody comes after them with a chainsaw. And if you think the chainsaw is an amazingly realistic prop, think again. It’s probably a real chainsaw. They take the chain off, but I still wouldn’t grab hold of one.

Once I had all my pieces in place, I could start plotting the actual sections of The Skeleton Haunts a House that take place in McHades Hall. And it occurred to me that the process is a lot like designing a haunted house.
I hope that once it all comes together, The Skeleton Haunts a House has some of the same excitement and thrills as a haunted house. That’s the plan, anyway.

Maybe I should have put in a chainsaw. 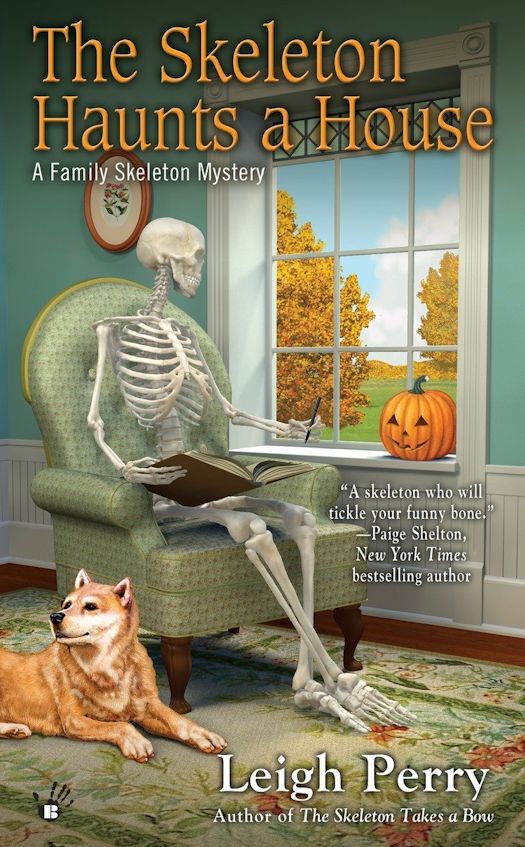 Sid the Skeleton bones up on clues to solve a Haunted House homicide in this mystery from the author of The Skeleton Takes a Bow...

What holiday could bring more warmth to a skeleton's chest cavity than Halloween? And when you're a living skeleton who's not supposed to be seen outside the house, it's a welcome chance to get some fresh air and rub bony elbows with people. That's why Sid doesn't mind wearing a full-body dog suit and going as Scooby-Doo along with Georgia Thackery's Velma to the Halloween Howl.

Sid can't wait to go through the Haunted House--but he gets rattled for real when a genuine dead body is discovered. Trapped inside as the police quickly seal off the crime scene, Sid makes no bones about dropping the dog suit and posing as an actual skeleton. This murder is a skull-scratcher, but as long as Sid is on the inside, he might as well case the joint to figure out who used the cover of darkness to commit the perfect crime...

Sid the Skeleton and Georgia Thackery return in The Skeleton Haunts a House, the 3rd book in the Family Skeleton Mystery series. Georgia's sister, Deborah, is running the Haunted House for the annual Halloween Howl at McQuaid University in Pennycross, MA. Georgia is currently an adjunct professor at McQuaid and dresses up as Velma to Sid's Scooby Doo to visit the haunted house. Georgia's daughter, Madison, is one of the scare performers. Georgia is not a fan of haunted houses and waits outside and while Sid is in the haunted house a murder is committed. Though reluctant at first Sid and Georgia are on the case!

There is much going on in The Skeleton Haunts a House - family feuds, murder, desperate students looking for a better grade, a touch of romance, and more. The highlight of the novel, however, is once again Sid. He's a wonderfully unique character and Georgia and Sid make an exceptional sleuthing team. Family interactions - Georgia, Deborah, and their parents as well as Georgia's relationship with her daughter - feel authentic. The characters including Sid are well developed and very relatable.

A deeply layered mystery kept me guessing. The pace was spot on as the mystery's pieces slowly fell into place. The killer was not who I initially suspected. This is a really enjoyable series and I hope we see more of Sid and Georgia. You can read each novel as a standalone, but do read the entire series - it's fun, well written and engaging. The Skeleton Haunts a House is a perfect October (or anytime) read. 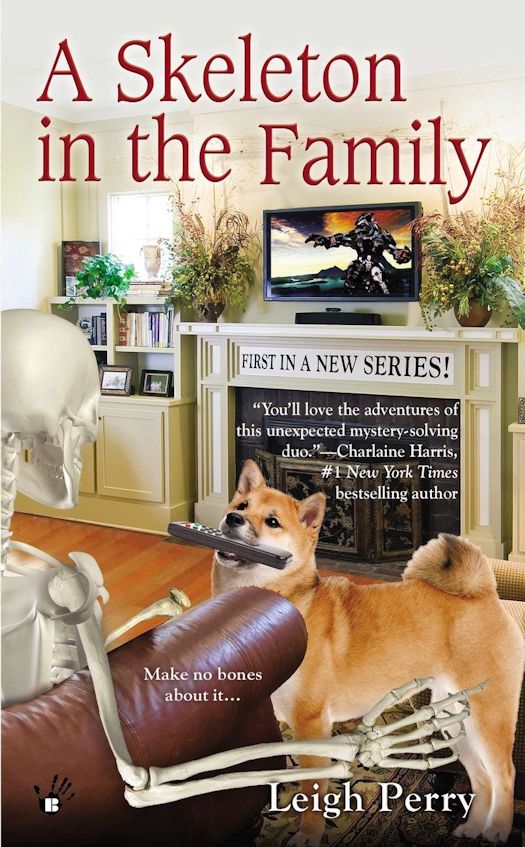 Most families have skeletons in their closets…

Moving back into her parents’ house with her teenage daughter had not been Georgia Thackery’s “Plan A.” But when she got a job at the local college, it seemed the sensible thing to do. So she settled in and began reconnecting with old friends.

Including Sid. Sid is the Thackery family’s skeleton. He’s lived in the house as long as Georgia can remember, although no one, including Sid, knows exactly where he came from and how he came to be a skeleton.

Sid walks, he talks, he makes bad jokes, he tries to keep Georgia’s dog from considering him a snack. And he manages to persuade Georgia to let him leave the house. But when she takes him to an anime convention—disguised as a skeleton, of course—he sees a woman who triggers memories of his past.

Now he is determined to find out how he died—with Georgia’s help. But their investigation may uncover a killer who’s still alive and well and bad to the bone… 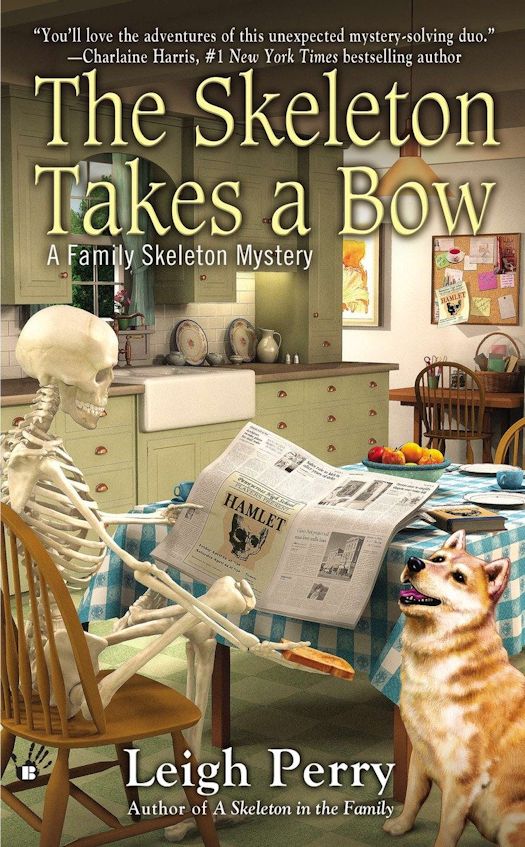 And the best performance as a skull goes to…

After years of hiding in the Thackery family house, Sid the skeleton is delighted to finally have his moment in the spotlight. He’s starring in a high school production of Hamlet. Well, not so much starring in as being a prop. At least part of him has a part—he’s using his head to play Yorick of “Alas, poor Yorick” fame. Every day, Georgia Thackery’s daughter, Madison, who’s also in the play, brings in his skull, and every night, she takes him home…

Until one night when he’s accidentally left at school—and hears the sounds of someone being murdered. But the next day, there’s no body and no one seems to be missing.

Sid is not a numbskull—he knows what he heard. Georgia thinks he imagined it—until a week later when a body is found. Now Georgia and Sid will both need to keep their heads as they stick their necks out and play sleuth to catch the conscience of a killer…

What:  One entrant will win a Mass Market Paperback copy of The Skeleton Haunts a House by Leigh Perry from the publisher. US ONLY

Who and When:  The contest is open to all humans on the planet earth with a US mailing address. Contest ends at 11:59PM US Eastern Time on October 29, 2015. Void where prohibited by law. No purchase necessary. You must be 18 years old or older to enter