Before I start to tell you about what I read this week I would like to say happy birthday to my sister Lauranne. Why the special mention? Well she is the very reason I am here at The Qwillery telling you about all the great speculative fiction I read. Lauranne first introduced me to the urban fantasy series Mercy Thompson by Patricia Briggs, Jim Butcher's Harry Dresden and my all time favourite fantasy (EVER!) Tigana by Guy Gavriel Kay about 8 years ago. I hadn't read very much in these genres before and hadn't like epic fantasy up until that point. So Happy Birthday Lauranne! But what did I read? 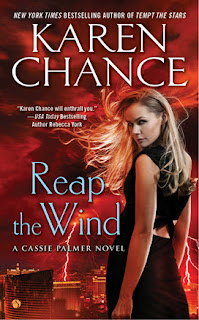 I wasn't as productive on the reading front this week unfortunately. I only finished 1 book (gasp!) and it was the seventh book in the Cassie Palmer series Reap the Wind by Karen Chance. I received this via the publisher from NetGalley so the rest of you are going to have to wait until the 3rd of November to see if you agree with my review.

In this installment Cassie is determined to find her half incubus friend and more than potential love interest Pritkin, centuries in the past in order to remove the curse placed on him in the last book. This isn't the only thing on her super packed agenda as she also have a whole pack of young children to take care of. She rescued the young acolytes at the end of the last book by going back in time and changing the time line.  All of this is in the back drop all of the escalating war between the Circle, the vampires, the demons and the fae.   Trying to rescue Pritkin isn't as straightforward as it seems as she has to take his demon father Rosier with her into the past in order to remove Pritkin's curse. Thwarting the rescue are the other Pythias Cassie needs to avoid who are determined that she doesn't create too many paradoxes with all her time travelling.  Too much too do and too little time should be Cassie's motto.

I was disappointed with this instalment.  While I will admit I haven't enjoyed the Cassie books as much as I have the Dorina Basarab series, which is set in the same world with a few cross over characters. Cassie always seemed much less in control than Dorina and a bit more of a pushover. However, in Reap the Wind it was the story itself I had a problem with. I found the story really rambled with an excess of quirky dialogue which in the end was annoying. There was also excessive use of sentencesthatallruntogetherwhichbecametedioustoread. There didn't seem to be much of a flow in the story like there has been in other books of the series and the time travelling element made it even more difficult to follow.  One minute Cassie was in a present day Las Vegas, a sentence or two later she is in the past searching for Pritkin and then a sentence or two after that she is trying to save Casanova from being killed in a weird alien/demon gladiator ring. I found I was having to go back and re-read parts of chapters in an attempt to sort out in my head what was happening. I felt there was little in the way of explanation of events or development of either Cassie or the plot until at least halfway through. By that point the story had started to lose my interest and I found myself flipping a few pages. On the positive side there is a better insight into Cassie's relationship with Mircea and she does start to stick up for herself more towards the end. It isn't all about the sex and romance now as she sees a side to him she hasn't seen before plus there is also a good use of cross over characters with the Dorina series. Overall, this took me much longer to read than what I had expected and by the end I wasn't satisfied that it was worth the investment in time however it won't stop me from finishing the series. I just hope that book 8 brings the story back on track.


Sorry folks, that is it for me for this week. I am travelling a lot next week so more time dedicated to reading. Until next week Happy Reading. 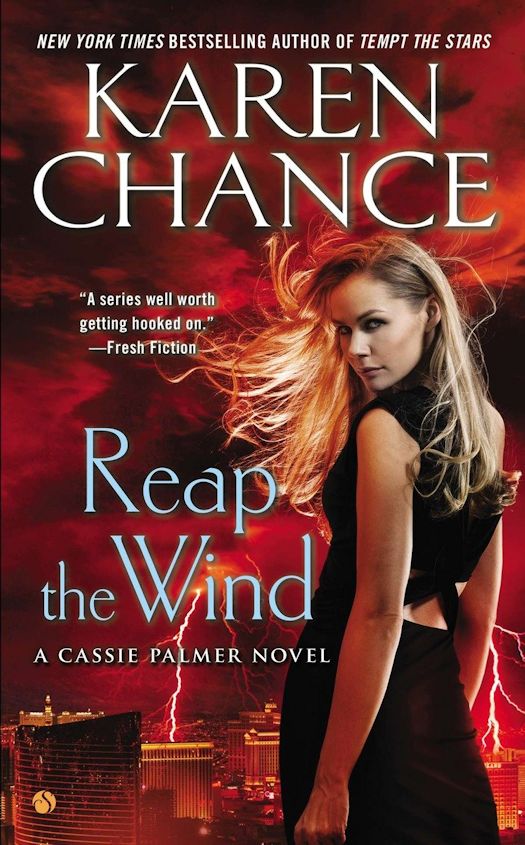 From the New York Times bestselling author of Tempt the Stars comes the latest in the series that’s “well worth getting hooked on”(Fresh Fiction).

You’d think that being chief seer for the supernatural world would come with a few perks. But as Cassie Palmer has learned, being Pythia doesn’t mean you don’t have to do things the hard way. That’s why she finds herself on a rescue mission skipping through time—even though she doesn’t entirely understand her dimension-bending new power.

Rescuing her friend John Pritkin should have been an in-and-out kind of deal, but with the near-immortal mage’s soul lost in time, Cassie has to hunt for it through the ages—with Pritkin’s demon dad in tow. He’s the only one who can reverse Pritkin’s curse, but with the guardians of the timeline dead set on stopping anyone from mucking about, Cassie will have to figure out how to get her friend back without ruffling too many feathers—or causing a world-ending paradox or two….