Please welcome Julia Buckley to The Qwillery. The Big Chili, the first novel in the Undercover Dish Mysteries, was published on October 6th by Berkley. 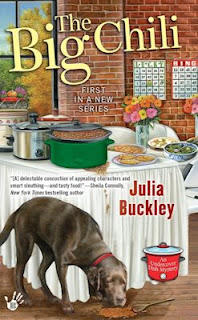 My cozy mysteries tend to all be set in little towns in the far-off suburbs of Chicago. This is partly because I live near Chicago and they say to write what you know, but it’s also due to my father, who was a gypsy at heart, we traveled every summer of my childhood. Because my parents enjoyed taking the back roads, we saw many sights and met many of the people who make up America.

Someone once said (I truly have no idea who) that we spend our childhood and teen years having experiences, and we spend our mature years remembering those experiences. In many ways I find this true, especially when I am writing, and long-ago memories flood back to inform my descriptions, my dialogue, and my settings.

Even though I’m not much of a traveler as an adult, I can continually draw upon my youthful travels—in which we visited about 32 of the 50 states—and recall little gems of memories that can still, after more than forty years, inspire me or make me laugh.

I remember visiting a tiny wooden chapel in the mountains of Colorado—just bare planks and nothing fancy, until you looked out the giant windows and saw the true grandeur of creation. I recall drinking water straight from a Montana mountain stream. Our trailer was set up in a variety of campgrounds in a variety of places, some fancy and spacious, with full plumbing privileges, and some—to my teenage horror—where the bathroom was an outhouse and the shower was just a spigot on an un-private wall.

We ate lobster in Maine and barbecue beef in Wyoming. We marveled at Florida sunsets and rousted hordes of grasshoppers from the New Mexico grass. We stared into the faces of bison in South Dakota and into our own reflections in clear Minnesota lakes.

And in all these places, we met wonderful, friendly people. We met a park ranger named Gallegos who inspired our family to stand around our campfire and argue about the pronunciation of his name for about half an hour until we heard how ridiculous we sounded. We still say “Gallegos!” as a joke when we can’t agree on something. We met innkeepers on the East Coast who were named Don and Barb but pronounced their names Dawn and Bob. As Midwesterners, we were fascinated by this opposition. We met a woman in the West who made jewelry out of moose droppings.

I still recall sitting in a pub called The Rathskellar in Washington D.C., where, as a budding nineteen-year-old novelist, I eavesdropped on people at the tables around me and jotted some of the best dialogues in my little notebook, sure that I would be able to use them later. In nearby Georgetown, while walking the quaint streets, I met a black cat who was so friendly I still recall the encounter to this day—I had wanted to take him home with me. Now I have my own black cat, and Panther often reminds me of the friend I met in my travels.

We learned how to pack and how to unpack, how to while away the hours while sitting in the car, and how, when the money ran low, to get multiple meals out of a cooler full of bread and deli meat.

Memories allow us to return to places distant in time and space. These happy moments inform the words that flow out of our pens (or our keyboards), and help to preserve what time and age would try to take away. 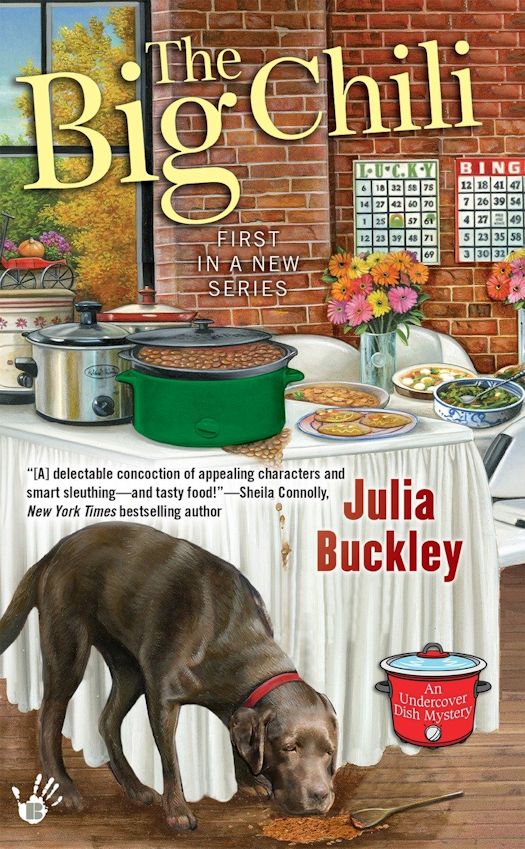 First in a delicious new mystery series filled with casseroles, confidences, and killers...

Lilah Drake's Covered Dish business discreetly provides the residents of Pine Haven, Illinois, with delicious, fresh-cooked meals they can claim they cooked themselves. But when one of her clandestine concoctions is used to poison a local woman, Lilah finds herself in a pot- load of trouble...

After dreaming for years of owning her own catering company, Lilah has made a start into the food world through her Covered Dish business, covertly cooking for her neighbors who don't have the time or skill to do so themselves, and allowing them to claim her culinary creations as their own. While her clientele is strong, their continued happiness depends on no one finding out who's really behind the apron.

So when someone drops dead at a church Bingo night moments after eating chili that Lilah made for a client, the anonymous chef finds herself getting stirred into a cauldron of secrets, lies, and murder--and going toe to toe with a very determined and very attractive detective. To keep her clients coming back and her business under wraps, Lilah will have to chop down the list of suspects fast, because this spicy killer has acquired a taste for homicide... 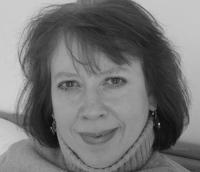 Julia Buckley is a Chicago mystery author whose career started in 2006 with the publication of THE DARK BACKWARD. Since then her work has appeared on Kindle in the Madeline Mann series and the novel THE GHOSTS OF LOVELY WOMEN. Her new series from Berkley Prime Crime will begin with THE BIG CHILI, released in October of 2015.

Julia has taught high school English for twenty-seven years; she lives near Chicago with her husband, two sons, and three cats.