Review and Giveaway: Ghost of a Potion by Hearther Blake 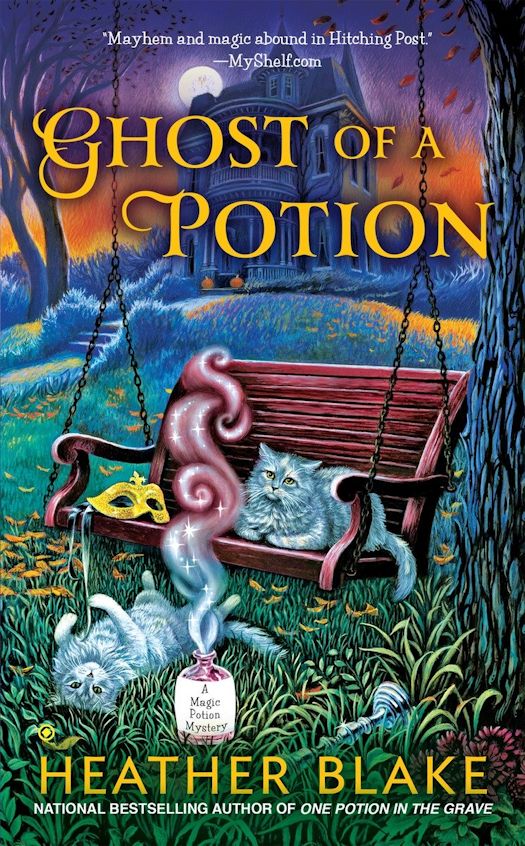 In the latest from the bestselling author of One Potion in the Grave, it’s Halloween in Hitching Post, Alabama, and potion shop owner Carly Bell Hartwell has an especially spooky customer to handle…

With all the ghosts that haunt her at this time of year, Carly doesn’t exactly rush to celebrate Halloween.  Even a costume ball organized by her boyfriend Dylan’s mother, Patricia Davis Jackson, holds little allure.  But to please Dylan, who wants peace between the two women, Carly reluctantly agrees to go.

Gossip around town is that architect Haywood Dodd plans to make a big announcement at the party. But before he can address the crowd, he’s found dead with Patricia standing over him, holding the murder weapon. Anxious to clear Patricia’s name and perhaps broker a truce with her, Carly would love to use her snooping skills to find the real killer. Only she has bigger problems to deal with—ghosts are flocking to her for help, including a very persistent Haywood Dodd…

Ghost of a Potion is the third installment of in Heather Blake’s Magic Potion Mystery series. The main character of the series is Carly Bell Hartwell, an empath and natural white witch, who runs a magic potion shop in the little town of Hitching Post, Alabama, which is well known for its many wedding venues. This time around, Carly is planning to spend Halloween safely ensconced in her home, with her cats Roly and Poly, to ride out the annual awakening of the local ghosts. As a witch, Carly can see ghosts at this time of year, and if they see her, she must help them in any way she can to find the light, but a bad experience with an evil ghost in her past has her running for cover. Unfortunately, Carly must attend a costume ball with her boyfriend, Dylan Jackson, before she hibernates and gets caught by the recently murdered ghost of local architect, Haywood Dodd. Now Carly has three days to help Haywood find his killer, if she doesn’t, Haywood will be trapped in his grave until next Halloween.

Carly is a fun character. She has little to no filter, making her dialogue realistic and humorous, and she has a very short fuse, so the many times she gets angry, are very entertaining. Carly’s magic comes from her father, Augustus Hartwell, quiet and kind, but long suffering non-spouse to Carly’s mom, Rona Fowl. Rona, a big, audacious blonde, runs one of the town’s most successful wedding venues, but is completely marriage-phobic and, even after living With Gus most of her life, will not marry him. Both are very present in Carly’s life and are both supportive of their daughter, just in very different and comical ways.

Carly has rekindled her romance with her former fiancé, local police detective Dylan Jackson. Dylan is a dreamy hunk with one flaw, his mother. Dylan’s mother, Patricia Davis Jackson, has despised Carly for years, for no apparent reason, to the point where she actually sabotaged their planned marriage years ago to break the pair up. In this novel, we see Dylan start to stand up to his cold and snobbish mother, and declare his love and commitment to Carly more forcefully. Carly has two best friends, the oldest being Ainsley Debbs, former wild child, now wife to a local pastor and mom to three rambunctious young children. Carly has just begun to be close to her formerly estranged cousin Delia Bell Barrows. Delia is a natural witch, like Carly, but Delia’s family went to the black side of the spectrum after a family feud when the girls were born. Delia also owns a shop in town, hers specializing in tiny hexes for revenge. Although she seems to have embraced the dark side of her magic, Delia is really very similar to Carly. They are both compassionate empaths, who staunchly support their loved ones and always manage to do the right thing. The relationship between Delia and Carly is one of the best of the series.

Carly also has three eccentric aunts from her mom’s side of the family, affectionately called the Odd Ducks. The Odd Ducks, Eulalie, Margi, and Hazel, are wacky triplets who all own small inns right on the same street where Carly lives. In this installment, we really only see Eulalie, who is movie star lovely, even at her advanced age, recklessly adventurous, and desperately but unsuccessfully looking for love. Carly’s other neighbor is Mr. Dunwoody, an unofficial uncle who is also older. He is a distinguished former professor who is quiet and observant. Carly will often sit with him on his porch and always leaves their encounters richer in knowledge or insight.

Along with these already wonderful characters, there are a plethora of townspeople and others introduced to power the mystery. Most notably Hyacinth Foster, Idella and Gabriel Kirby, Barbara Jean Ramelle, Mr. Butterbaugh, and Avery Bryan. Hyacinth is the president of a tight knit and powerful Harpies, The Hitching Post Restoration and Preservation Society, a local group with few members who do good works around town, one being the renovation of an old town mansion, which happens to be the site of Haywood Dodd’s murder on the night of the masked ball. Hyacinth is also Haywood’s girlfriend and is visibly grief stricken throughout the book. Another Harpie is snooty Idella Kirby. She is married to beloved town veterinarian, Gabriel Kirby, who is kind and well liked. Barbara Jean is the town’s hardnosed mayor, and, of course, another Harpie member, she’s married to restaurateur Doug. Poor Mr. Butterbaugh, a sweet hypochondriac who has recently fallen for Aunt Eulalie, tragically as she does not return his affections, and is the live in caretaker of the mansion where the murder takes place. Avery Bryan is the out of towner, who is filled with mystery but seems to have some kind of connection to Haywood and the murder. There are also two other locals that must be mentioned. Jenny Jane and Virgil, two more needy ghosts that Carly accidentally meet. They are both fully realized characters, even if they are decidedly non-corporeal when they are introduced.

The characters of this novel are the real stars of the book. They are multidimensional and realistic. Their interactions and relationships are well done and leave the reader feeling like they would easily recognize them if they met them by chance at the coffee shop. The mystery and minor storylines all run seamlessly together and have wonderfully done endings. Ghost of a Potion is a wonderful cozy mystery and is a must read for those who enjoy a little bit of the paranormal with their cozies, and for those who enjoy snappy dialogue, comical situations, and excellent characterization. 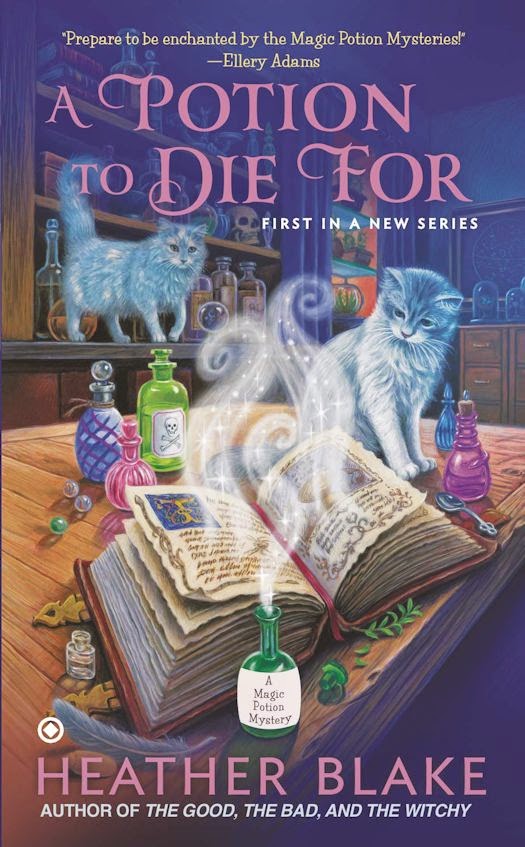 As the owner of Little Shop of Potions, a magic potion shop specializing in love potions, Carly Bell Hartwell finds her product more in demand than ever. A local soothsayer has predicted that a couple in town will soon divorce—and now it seems every married person in Hitching Post, Alabama, wants a little extra matrimonial magic to make sure they stay hitched.

But when Carly finds a dead man in her shop, clutching one of her potion bottles, she goes from most popular potion person to public enemy number one. In no time the murder investigation becomes a witch hunt—literally! Now Carly is going to need to brew up some serious sleuthing skills to clear her name and find the real killer—before the whole town becomes convinced her potions really are to die for! 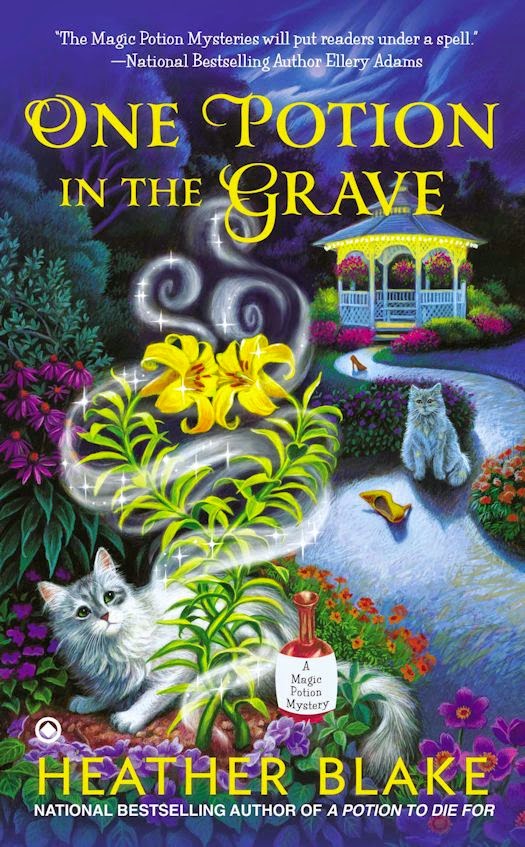 Carly Bell Hartwell’s love potions are always in demand in Hitching Post, Alabama, the wedding capital of the South.…

When Katie Sue Perrywinkle walks into the Little Shop of Potions, Carly is surprised and delighted to see her old childhood friend. Katie Sue fled her hometown and a troubled family over a decade ago. But she’s not back for a social visit. She’s come to settle a score with Senator Warren Calhoun, who is in town for his son’s high-profile wedding.

But before Katie Sue has a chance to voice any objections, she’s forced to forever hold her peace. After finding her friend dead, Carly vows to find her murderer. Were the corrupt Calhouns willing to go to any lengths to avoid a scandal? Did Katie Sue’s family take the term “bad blood” to a whole new level? And why did the bride-to-be come to Carly for a love potion? As Carly gets closer to the truth, a killer is planning a very chilly reception.…

What:  One entrant will win a Mass Market Paperback copy of Ghost of a Potion by Heather Blake from the publisher. US ONLY

Who and When:  The contest is open to all humans on the planet earth with a US mailing address. Contest ends at 11:59PM US Eastern Time on November 6, 2015. Void where prohibited by law. No purchase necessary. You must be 18 years old or older to enter