Review: The Devil's Only Friend by Dan Wells 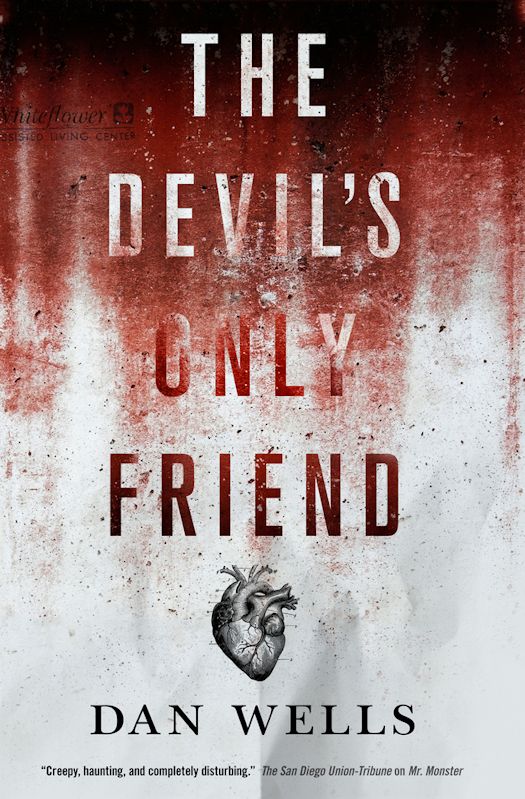 John Wayne Cleaver hunts demons: they've killed his neighbors, his family, and the girl he loves, but in the end he's always won. Now he works for a secret government kill team, using his gift to hunt and kill as many monsters as he can . . .

. . . but the monsters have noticed, and the quiet game of cat and mouse is about to erupt into a full scale supernatural war.

The Devil's Only Friend is the first book in a brand-new John Wayne Cleaver trilogy by New York Times bestselling author Dan Wells.

Dan Wells is the only author I've ever read that has scared me to the point of shutting a book mid-sentence and throwing it across the room in fear, only to get up and pick the book up to continue reading. Normally, if an author messes with my mind that much, I say no thanks and go find a new book. I like to get scared, but I don't want nightmares. I had a bad experience in high school while researching the crimes of Jack the Ripper, and Dan Wells is the only author that has since freaked me out in a similar way and yet I still return to reading his books. His skill as a writer is that good.

I loved the first John Cleaver trilogy and was ecstatic to learn Wells was returning to the character with a new trilogy. The Devil's Only Friend is the perfect launching off point for a new trilogy of an established character. Wells changes John's world drastically by taking him out of his hometown, with its familiar supporting characters, and into a new city and new cast of supporting characters. I love that John is given so many new challenges. He has to find his place in the FBI team. He has to deal with the emotional trauma from past events, and he has find and kill some dangerous demons. I also love spending time in a psychopathic teenage mind.

There are a lot of new supporting characters to get to know right off the bat, and Wells does a good job of giving them unique personalities and quirks to help differentiate them from one another. Wells also gives the team a quick case at the start of the book to help define the roles of each team member before the main event. It sets everything up nicely for the rest of the book.

The pacing is quick but even. I never felt like events were moving too fast or got bored by the introspective moments. Wells also helps expand his world by giving the most information yet on his demons, or Withered or Gifted, depending on perspective of character. It also helps plant some seeds for the next two books in this trilogy.

The Devil's Only Friend is a magnificent start to a new trilogy. It's the perfect blend of horror, action and inventive world building. You'll be glad you picked up the book and started down the dark path of another John Cleaver trilogy, and don't worry if you haven't read the first three books, Wells gives you all you need to enjoy yourself. There isn't an issue with language. Violence on the other hand is often and descriptive, but not gory. No sexual situations. I'd recommend it to teens and adults, as long as they don't scare easy. It's the perfect book to enjoy this month. Go nab yourself a copy.