Please welcome Sheila Connolly to The Qwillery. A Gala Event, the 9th novel in the Orchard Mystery series, was published on October 6, 2015 by Berkley. 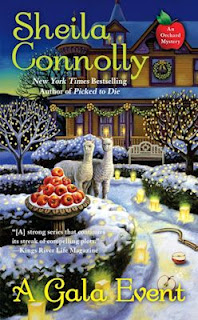 Growing apples and making a living doing it isn’t easy (I say this based on my extensive experience with my orchard of seven trees, only one of which is taller than I am at the moment). Meg Corey didn’t choose to do it, but she found herself with no job and an apple orchard in her back yard, so the orchard became her job. How many people would be willing to take on a challenge like that, with no experience?

Then she started finding bodies.

Writing about someone who runs an orchard imposes a pattern on a series, because apples have their own annual cycle. Starting in late winter, they need pruning and fertilizing, then spraying (responsibly!) to keep down insects and diseases, then thinning (to relieve stress on the tree limbs later and to produce larger individual apples), and finally harvesting, which can run from August through November. Since Meg has only one employee (except during the harvest season), you can guess that she’s pretty busy. When is she supposed to find time to solve crimes—and fall in love?

But she does. Seth Chapin started out as a next-door neighbor who fixed her plumbing and then took offense when Meg found herself involved in a crime that in touched on Seth’s own family—not a good start for a relationship. But Granford, Massachusetts is a small town, and you can’t stay mad at anyone for long. Eight books later, Meg and Seth are getting married.

Of course, that’s not simple either. For one thing, they more or less have to invite everyone in town, because everyone knows everyone else and they don’t want anyone’s feelings to be hurt. Meg and Seth chose December for the date, hoping that the harvest would be over and Seth’s renovation business would be quiet (who remodels during the holidays?). They hadn’t counted on an ex-con and an old crime intruding in the middle of their wedding planning. But when Meg and Seth believe that a wrong has been done, they want to do something about it.

Apples are such a central part of everyone’s life, particularly at this time of year. Apples in New England (home of Johnny Appleseed) are even more special. You need to taste apples you’ve picked straight off the tree, and sample more than one variety, to really enjoy them. It has been a joy to use this as a setting for Meg and Seth, who are finding themselves—and have found each other.

And by the way—the honeymoon will be just as complicated as the wedding! 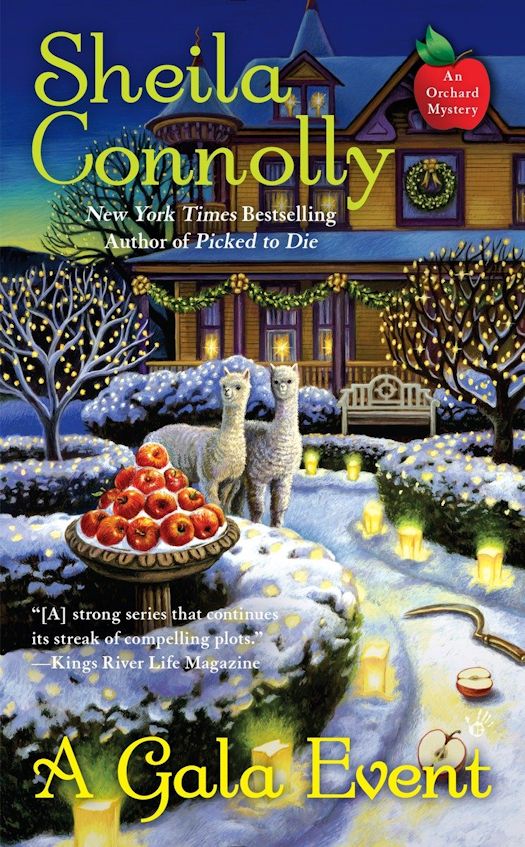 Wedding bells are ringing for Meg and Seth in the latest Orchard Mystery from the New York Times bestselling author of Picked to Die...

The fall harvest may be just about over, but orchard owner Meg Corey is busier than ever planning her wedding to Seth Chapin. Who knew picking apples would be less work than picking out rings and a dress? And even though the happy couple has invited most of Granford, Massachusetts, to the ceremony, they might have to make room for one more guest...

Ex-con Aaron Eastman has unexpectedly reappeared in his hometown, searching for answers to the tragic fire in his family's past that put him behind bars twenty-five years ago. Moved by his sincerity, Meg vows to do everything she can to help him solve the cold case. As she cobbles together the clues, it becomes increasingly clear that Aaron may have been considered the bad seed of the family, but someone else was one bad apple...

A Gala Event is the 9th installment in Sheila Connolly’s Orchard Mystery Series. The series follows Meg Corey, formerly a big city financier who is now living happily in small town Granford, Massachusetts running an apple orchard on property built by her family hundreds of years ago. Unfortunately, Meg has a penchant for stumbling upon bodies and for solving complex mysteries. This time, she and her fiancé, Seth Chapin, feel compelled to solve a 25 year old murder/arson case in the hopes of giving closure to the man who was convicted of the crime all those years ago, but who may not be the murderer.

Meg Corey is a practical character. She always gets the job done, whether the job is successfully harvesting her apples, juggling her busy work life with her busy home life, or solving seemingly impossible crimes. She is naturally curious and has a methodical mind. Seth Chapin, a lifelong Granford resident, is always along with her for the ride. He is honest, stable, and ruggedly handsome and is involved in this case more deeply than he has been in the past. Gail Seldon, one of the first people Meg met when she moved to Granford and her best friend, runs the town’s historical society. The action of the plot begins when Meg finds Gail stunned and covered in blood one evening. Art Preston, Seth’s best friend, and the town sheriff is always involved in Meg’s cases, from a law enforcement standpoint, but this time also takes a more personal role.

The mystery revolves around Aaron Eastman, a local man who has recently been released from prison, serving 25 years for the deaths of his parents and grandmother in a fire that also destroyed his home when he was a strung out 17 year old kid. Aaron has no recollection of the night of his family’s tragedy, either from trauma or a cocaine induced haze, and has no idea if he actually committed the crime. He is on a quest to find the truth, even if that means he must finally come to terms with the knowledge that he did in fact kill his family. He crosses paths with Meg in an unusual manner that leaves Aaron trusting Meg and leaves Meg with a strong desire to help him in his mission. During the course of the investigation, we also meet Aaron’s brother and sister, Kevin and Lori Eastman. They are Aaron’s only living relatives but are by no means ready to accept him back into the family. Lori, who is older that Aaron, has lived a tough life herself, bouncing from husband to husband and harboring a drinking problem. Kevin, only slightly older than Aaron, is run down and distant, even though he must have great compassion as he has devoted his life to social work.

As is usual in this series, the townspeople play a role in the mystery and in the day to day lives of Meg and Seth. Lydia Chapin, Seth’s cheerful and supportive mother, and Rachel, his very pregnant and highly intelligent and kind sister, both make important appearances. Meg’s young orchard manager, Bree, has a much smaller role in this story. Bree can be abrasive and gruff in her manner, with a large chip on her shoulder that can, at times, be wearying. Jacob Peterson is an aging insurance agent and old friend of Lydia who helps move the investigation in the right direction. Nicky and Brian, like Meg, are transplants to Granford, running a successful whole food restaurant where Meg and Seth are planning to hold their wedding in a few weeks’ time, if Meg can get the details taken care of while trying to solve the mystery and finishing her harvesting tasks for the season.

Along with the human characters, this book is chock full of animals of many kinds. Seth’s loyal golden retriever, Max, is ever present and calm. Not to be outdone, Meg also owns a haughty cat and two goats, named Isabelle and Dorcas. We also meet a pair of wayward alpacas named Lulu and Phoebe, who reside on a new alpaca farm near Meg’s property and have a penchant for finding weaknesses in their fences.

The storyline of the book moves naturally and incorporates not just the mystery, but also the town’s history and the many facets of Meg and Seth’s home and work lives. The book flows well to a surprising conclusion that is also satisfying. The series relies heavily on local color and character interaction and paints a true to life portrait of a small town in New England, with the fun of interesting mysteries thrown into the mix.

Sheila Connolly is the New York Times bestselling, Anthony and Agatha award–nominated author of the Museum Mysteries, the Orchard Mysteries, and the County Cork Mysteries. She has taught art history, structured and marketed municipal bonds for major cities, worked as a staff member on two statewide political campaigns, and served as a fundraiser for several nonprofit organizations. She also managed her own consulting company, providing genealogical research services. In addition to genealogy, Sheila loves restoring old houses, visiting cemeteries, and traveling. Now a full-time writer, she thinks writing mysteries is a lot more fun than any of her previous occupations.

What:  One entrant will win a Mass Market Paperback copy of A Gala Event by Sheila Connolly from the publisher. US ONLY

Who and When:  The contest is open to all humans on the planet earth with a US mailing address. Contest ends at 11:59PM US Eastern Time on November 3, 2015. Void where prohibited by law. No purchase necessary. You must be 18 years old or older to enter