Interview with Domenick Dicce, author of You're a Vampire - That Sucks!


Please welcome Domenick Dicce to The Qwillery. You're a Vampire - That Sucks! was published by Tarcher/Penguin on October 13, 2015. This is a perfect gift for any of your newly undead acquaintances or anyone who'd like to get the real scoop on being a vampire. Laughter included. 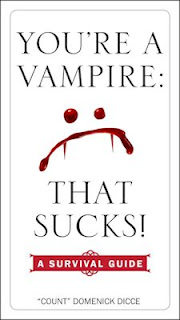 Domenick:   I started out as an actor looking for ways to satisfy my need to act. This lead me to writing YouTube sketches. It was creating these videos that unlocked my love of writing. In addition to scripts, I found myself writing novels, short stories and blogs.

TQ:  Are you a plotter, pantser or hybrid? What is the most challenging thing for you about writing?

Domenick:   I’m a pantser, but as a former teacher realize the importance of creating outlines and planning things out. I am attempting to bring more plotting into my writing process.

The most challenging thing for me as a writer is staying focused. I have a 1,000,001 ideas floating around in my head and it is easy to get sidetracked.

TQ:  Describe You're a Vampire - That Sucks! in 140 characters or less.

Domenick:   A Comedic how-to book that explores vampire lore from ancient legends to modern films through the eyes of a “real” vampire.

TQ:  Tell us about the type of newly turned vampire who would find You're a Vampire - That Sucks! informative. Are your vampires more in the traditional vein (think Bram Stoker) or more of a modern breed?

My vampires lean toward the newer mythology, because that is what more people identify with and they fit better into our modern world. However, I made sure to incorporate a lot of the more traditional elements, even beliefs older than Bram Stoker’s version.

TQ:  What inspired you to write You're a Vampire - That Sucks!?

Domenick:   I came up with the idea while my wife and I were watching Beetlejuice. Alec Baldwin and Geena Davis have the Handbook For The Recently Deceased to help them with their new life as ghosts. I thought that would be a fun book to actually write. From there, I spun off into a series of survival books for ghost, werewolves, witches, zombies and vampires.

TQ:  What sort of research did you do for You're a Vampire - That Sucks!?

Domenick:   I started out by doing general research into the history of vampires. It was important for me to know who these creatures were before mass media got ahold of them. When I had a firm understanding of the old beliefs, I started reading and watching as may vampires stories as I could.

TQ:  Which question about You're a Vampire - That Sucks! do you wish someone would ask? Ask it and answer it!

Domenick:   What is your response to people who say the vampire market is oversaturated?

The market is oversaturated because vampires sell. They have been popular for hundreds of years and it is not going to end anytime soon. We are eternal. Don't let this response get in your way.

TQ:  Name three of your favorite vampire films? Which vampire films, if any, might be helpful to the newly turned?

2. Interview With The Vampire

3. From Dusk till Dawn

Any one vampire film by itself will get you killed. (Unless this book gets turned into a movie.)

Domenick:    I am currently working on the werewolf sequel and a book about germs. Going back to the focus response earlier, I'm also attempting to turn my Bachelor Chef YouTube sketches into a television pilot.

Domenick:   Thank your for allowing me to participate on your site.

You're a Vampire - That Sucks! : A Survival Guide
Tarcher/Penguin, October 13, 2015
Trade Paperback and eBook, 160 pages 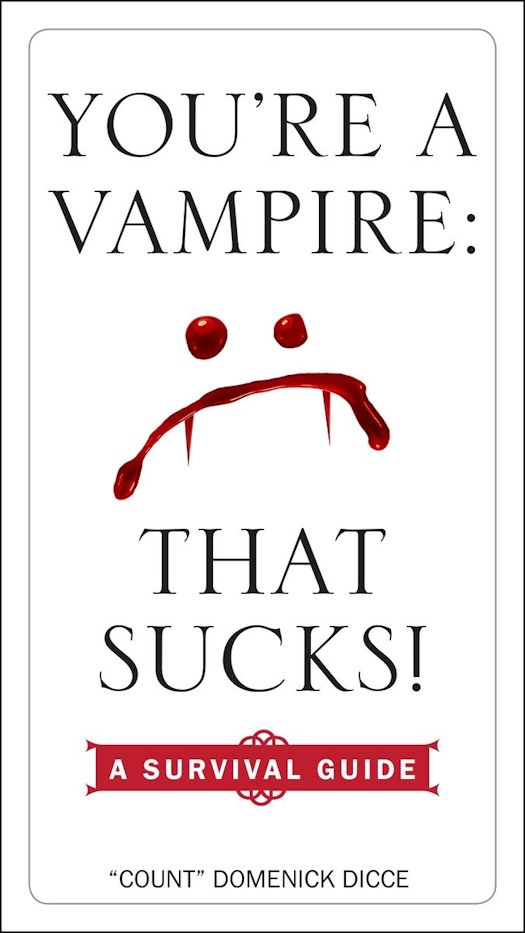 Being bitten by and turned into a vampire isn’t the glitz and glamor that Hollywood makes it out to be. In fact, one out of five newly turned vampires will succumb to a slew of easily avoidable and common pitfalls within their first few months as a nightwalker—tempting garlic-laced Italian food, silver jewelry, and anything with an SPF below 1,000 will have to go.

As an answer to this tragic loss of undead life, “Count” Domenick Dicce has written the definitive how-to guide that just might save your pale, ice-cold skin. This helpful tome will cover everything from Vampire 101—such as hunting, feeding, and getting used to your new powers—to Vampire Graduate Studies—such as coffin selection, the ghoulish world of vampiric social hierarchy, and the universal Laws of the Vampire.

This humorous and giftable guide will be perfect for you or the vampire nut in your life, complete with illustrations throughout.

“Count” Domenick Dicce is a writer, actor, and all-around creator of fun. He lives in California, and this is his first book.

Labels: Domenick Dicce, Interview, Penguin, Tarcher, You're a Vampire - That Sucks!
Email ThisBlogThis!Share to TwitterShare to FacebookShare to Pinterest