Please welcome Howard Andrew Jones to The Qwillery. Beyond the Pool of Stars, the 29th novel in the Pathfinder Tales series, was published on October 6th by Tor Books. 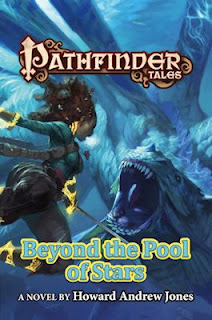 I get asked sometimes if you have to read all the books to enjoy Pathfinder novels and the answer is a simple no. Each one is deliberately designed to standalone and be complete unto itself. You can pick any of them up without any prior knowledge of any other book, or, in the case of series characters, having read previous books featuring them.

And you don’t need to have read my two preceding books set in Golarion, either. As I just mentioned, each is designed to stand alone. And in any case, my new Pathfinder novel is set in an entirely different area of the world from my first two, and has completely new characters.

Sometimes I’m asked whether or not you have to play the game to read the books, and that, too, is a big no. Sure, if you’re playing the game you’re likely to already be familiar with the world, but the books are written to be enjoyed by fantasy readers at large.

And, hopefully, the tales pull in readers beyond the fantasy genre as well. For instance, I’m a big fan of historical fiction and hardboiled detective novels. Historical fiction didn’t play that strong a role in the composing of this novel set in an imaginary land – although it did help inform some of my research. But my love of mysteries permeates all of my fiction.

I love a good mystery. Sure, if I wrote cozies are hard-boiled detective fiction you’d expect me to say that, but it probably sounds strange coming from a fantasy adventure writer.

Mystery lies at the heart of all great adventure stories. You can break mystery off into a separate genre for those who are primarily interested in detection or drawing room mysteries just as you can break off horror or thrillers into separate sections of the bookstore. Yet most writers take a lot of these components and thread them into their fiction.

In my case, no matter if I’m writing historical fiction or fantasy, there’s a hunt for clues and motives and answers. Those characteristics are more overt in my historical fantasy series (starting with The Desert of Souls) wherein Dabir and Asim function something like a 7th century Arabia Sherlock Holmes and Watson.

The mystery elements in Beyond the Pool of Stars have more in common with the mystery elements in Raiders of the Lost Ark. There’s the quest for a lost object, and pursuit by adversaries, but those aren’t, strictly speaking, characteristics found only in Chandler and Hammett. What you do find is a search for clues as to what’s REALLY going on, the threat of treachery from within, and the assembly of clues to solve puzzles and unravel motivations.

I’ve been trying to coax some of my fantasy fans into trying out historical fiction and hardboiled detective stories. It often seems that people don’t like to come out from behind their genre barriers, and I always try to tell them how much of a revelation Raymond Chandler’s writing was and how I wish I’d tried him sooner. Unless they’ve read Chandler, they just blink at me. I even run a column on my web site with my friend (fellow writer and editor of Detroit Noir) John Chris Hocking in the hope I can lure other fantasy fans into the glories I should have been sampling years earlier: Hard Boiled Monday. (http://www.howardandrewjones.com/category/hardboiled-noir/hardboiled-monday) There are occasional signs that some readers are trying it out. 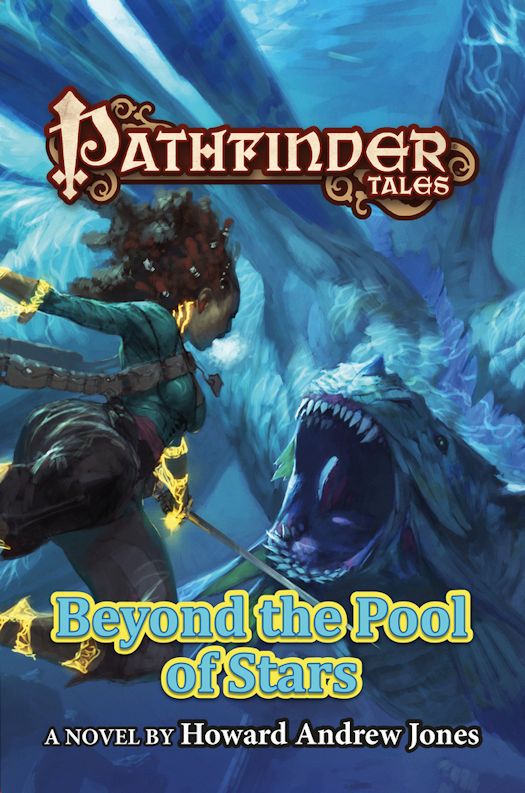 From critically acclaimed author Howard Andrew Jones comes a fantastical adventure of deep-water danger and unlikely alliances in Pathfinder Tales: Beyond the Pool of Stars, set in the award-winning world of the Pathfinder Role playing Game.

Howard Andrew Jones is the critically acclaimed author of The Desert of Souls, The Bones of the Old Ones, and Pathfinder novels Plague of Shadows, Stalking the Beast and the hot off the presses Beyond the Pool of Stars. A former Black Gate Editor, he also assembled and edited 8 collections of historical fiction writer Harold Lamb’s work for the University of Nebraska Press. He can be found lurking at www.howardandrewjones.com. Follow him on Twitter @HowardAndrewJon

What:  One entrant will win a Trade Paperback copy of Pathfinder Tales: Beyond the Pool of Stars by Howard Andrew Jones from Tor Books. US / CANADA ONLY

Who and When:  The contest is open to all humans on the planet earth with a US or Canadian mailing address. Contest ends at 11:59 PM US Eastern Time on November 2, 2015. Void where prohibited by law. No purchase necessary. You must be 18 years old or older to enter.