Interview with Sigal Samuel, author of The Mystics of Mile End


Please welcome Sigal Samuel to The Qwillery as part of the 2015 Debut Author Challenge Interviews. The Mystics of Mile End is published today by William Morrow. Please join The Qwillery in wishing Sigal a Happy Publication Day. 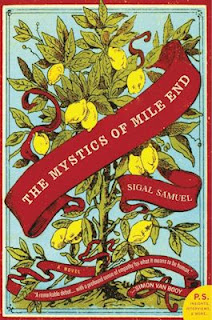 Sigal:  I started writing — mostly journals — when I was about 10 years old. It was how I made sense of the world then, and it still is. In my childhood bedroom, I have a whole bookshelf that’s entirely taken up with those journals.

Sigal:  I’m definitely a plotter. I’ve lost track of how many outlines and beat sheets I made while writing The Mystics of Mile End. That said, the most enjoyable part of writing is when the story surprises you and takes control, and something comes out that’s beyond anything you could have planned for.

Sigal:  When I decided to write The Mystics of Mile End from the perspectives of a little boy, a middle-aged professor, a female college student, and an old man, I thought the hardest part would be accessing an authentic voice for each. But no — the trickier thing was staying “in the zone” of any one voice long enough to finish writing that character’s section. For a while, I actually had to give up reading fiction that was written in a vastly different voice from the one I was trying to create.

Sigal:  I am influenced by contemporary Jewish magical realist writers like Etgar Keret and Jonathan Safran Foer, and by South American surrealists like Gabriel Garcia Marquez and Jorge Luis Borges. Some of my favorite authors include Miranda July, for the sheer originality of her voice, and Zoe Whittall, who writes LGBT characters that are gritty, brave and believable.

TQ:  Describe The Mystics of Mile End in 140 characters or less.

Sigal:  A dysfunctional Jewish family in Montreal grows obsessed with climbing the Kabbalah’s Tree of Life — even though they don't believe in God.

TQ:  Tell us something about The Mystics of Mile End that is not found in the book description.

Sigal:  In the final version of the book, the story is told from four distinct perspectives. But in the first draft, it was all from one perspective — that of the daughter, Samara. Ultimately, I decided it would be much more interesting to tell this story from multiple vantage points, especially since there’s always more than one side to a story when you’re dealing with a family.

TQ:  What inspired you to write The Mystics of Mile End? Why focus on the Kabbalah?

Sigal:  I grew up in the Orthodox Jewish community and, as a girl, wasn’t allowed to show an interest in the more mystical legends in the Jewish tradition. Luckily, I had a dad who was a professor of Jewish mysticism and was willing to share its secrets with me. His after-school Kabbalah classes started when I was 12 and continued around our dining room table throughout high school. Years later, those lessons inspired me to write The Mystics of Mile End.

TQ:  What sort of research did you do for The Mystics of Mile End?

Sigal:  I brushed up on some of the mystical legends I’d learned as a kid, and turned to scholars like Aryeh Kaplan to deepen my knowledge of them. I also spent a lot of time walking around Mile End — the half-hipster, half-Hasidic neighborhood of Montreal where the story takes place — to capture the details of how people dress, talk and behave.

Sigal:  The easiest character to write was the family patriarch, David. That may seem odd since, on the surface, I don’t have much in common with this middle-aged, male, atheist professor. But I find it relatively easy to inhabit the mind of an adult like that.

The hardest character was 11-year-old Lev. Writing in a kid’s voice is tough because you have to remember that all kids, even precocious ones like Lev, are self-centered — they think the whole world revolves around them. I read Lev’s whole section out loud to myself to make sure every phrase sounded like something he would really say.

TQ:  Which question about The Mystics of Mile End do you wish someone would ask? Ask it and answer it!

Sigal:  What do you hope readers will take away from The Mystics of Mile End?

I think that some of us are so hungry for meaning that we get obsessed with certain ideas — often these are seductive religious or mystical ideas — and we forget that pursuing this obsession comes at a cost to the people around us. Without making any moral judgment about this, I wanted readers to consider the question: What’s the value of devoting yourself to some notion of holiness if it means leaving behind those who love you most?

TQ:  Give us one or two of your favorite non-spoilery lines from The Mystics of Mile End.

“I may have been hearing God’s voice, but my interest remained at the level of the sublime, sky-scraping Tree of Life; I was not about to get down in the mud of thou-shalt-and-shalt-not Judaism.”


“Don’t see signs in everything. It makes it impossible to live.”

Sigal:  My children’s fantasy novel, Infinity Hotel, tells the story of Zeno, an eleven-year-old boy who discovers a hotel with an infinite number of rooms. This action-packed adventure challenges readers aged 9–12 to explore the deliciously mindboggling idea of infinity. I’m currently working on a second draft. 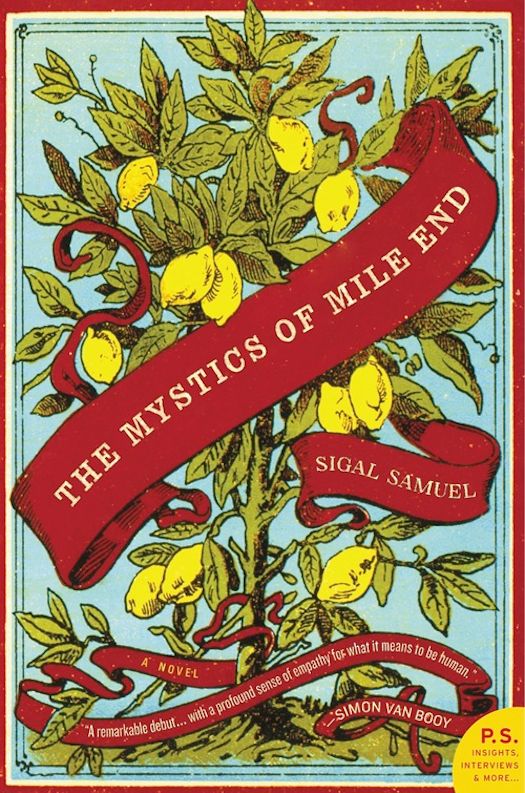 Sigal Samuel’s debut novel, in the vein of Nicole Krauss’s bestselling The History of Love, is an imaginative story that delves into the heart of Jewish mysticism, faith, and family.

“This is not an ordinary tree I am making.

In the half-Hasidic, half-hipster Montreal neighborhood of Mile End, eleven-year-old Lev Meyer is discovering that there may be a place for Judaism in his life. As he learns about science in his day school, Lev begins his own extracurricular study of the Bible’s Tree of Knowledge with neighbor Mr. Katz, who is building his own Tree out of trash. Meanwhile his sister Samara is secretly studying for her Bat Mitzvah with next-door neighbor and Holocaust survivor, Mr. Glassman. All the while his father, David, a professor of Jewish mysticism, is a non-believer.

When, years later, David has a heart attack, he begins to believe God is speaking to him. While having an affair with one of his students, he delves into the complexities of Kabbalah. Months later Samara, too, grows obsessed with the Kabbalah’s Tree of Life—hiding her interest from those who love her most–and is overcome with reaching the Tree’s highest heights. The neighbors of Mile End have been there all along, but only one of them can catch her when she falls. 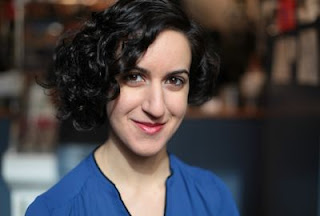 Sigal Samuel is an award-winning fiction writer, journalist, essayist, and playwright. Currently a writer and editor for the Forward, she has also published work in the Daily Beast, the Rumpus, BuzzFeed, and the Walrus. Her six plays have been produced from Vancouver to New York.

Sigal earned her MFA in Creative Writing from the University of British Columbia. Originally from Montreal, she now lives and writes in Brooklyn. The Mystics of Mile End is her first novel.