Interview with Minerva Zimmerman, author of Take On Me


Please welcome Minerva Zimmerman to The Qwillery as part of the 2015 Debut Author Challenge Interviews. Take On Me was published on October 6th by Fireside Fiction Company. 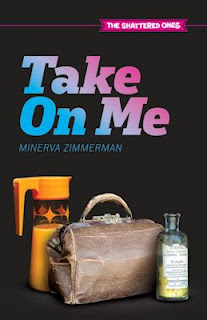 Minerva:  I think Dear Mr. Henshaw by Beverly Cleary was a huge influence on my decision to become a writer at age 6. I hope some of my spelling has improved since then. I’ve dabbled in trying to talk myself out of becoming a writer ever since, but so far it hasn’t worked.

Minerva:  I am a pantser until about the two-thirds mark through a project, then I sit down and outline everything I’ve already written and everything I know needs to happen so I can get a better overview of things and start to see if stuff needs to be moved around. That way I can see if there’s a subplot that needs removing, or if I’ve got any holes that need filling. I did a project where I outlined the whole thing first and it took the joy of discovery out of the process of writing for me. I will say that the projects I’ve finished, I knew where I was going, so I’m not sure an outline is as important to me as just knowing a destination.

Minerva:  I think it depends on what I’m working on. I am not sure I’d answer this question twice the same way. Right now I think trying to live up to my own expectations for my writing is the hardest thing. A month ago I would have said doing copyedits. Launch week I’m sure I’ll say promotion.

Minerva:  I am a big mythology and fairy tale person. I also adore science and try to read a lot of interesting scientific discoveries. Strangely whenever anyone asks me about my influences I always think of authors I read when I was younger vs. anything more recent. Authors like: Edgar Eager, Alfred Sloat, E. Nesbit, Ellen Raskin, Madeleine L’engel, Susan Cooper, and Ursula K. LeGuin (Tehanu is probably the most influential book I’ve ever read. It takes a world you’re familiar with and turns it on its head by showing you a different POV with other internal information). My favorite authors are the ones that make me think, which is not the same as those whose work I’ve enjoyed the most. Right now I’m probably most obsessed with Terry Pratchett, because I came to his books late and now I’m torn between dissecting and re-reading all of them (as well as listening to all the audiobooks) to find every bit of gleanable craft… and slowly rationing them out and savoring them. So far I’ve stuck with the latter.

TQ:  Describe Take On Me in 140 characters or less.

Minerva:  Imagine if Joss Whedon rebooted Highlander but with vampires, set in 1986 Chicago.

TQ:  Tell us something about Take On Me that is not found in the book description.

Minerva:  I drank a lot of Tang and Vitamin Supplement Powder while writing this story. I tried to take up eating Grape Nuts too, but while I like them more than Hannah does, I just never learned to love them.

TQ:  What inspired you to write Take On Me? Why vampires?

Minerva:  I wanted to write something that was enjoyable to write I knew I would finish, so I picked up a world I’d created in about 1998 but lacked the skill at the time to render it into publishable fiction. Vampires had always been one of the groups in that world and I ended up writing a scene between Alex and Hannah but decades in the future from the events in TAKE ON ME. It was just a fun little writing exercise because I was in a bad place with my writing at the time, and it happened that in this conversation they alluded to the events of how they’d originally met and what each did or did not remember about it. I just knew I had to write this story and that was the best jumping off point to bring readers into the world of The Shattered Ones.

TQ:  What sort of research did you do for Take On Me?

Minerva:  Alex has a tendency to flash back to events from his past that affect how he sees the events of the present time, so I had to do a lot of research to make sure those ring true and that all the medical things Alex does at that time are appropriate for what he knows at the time. It was actually hardest to find out what has changed in internal medicine since 1986 rather than the 1880s. The medical profession is kind of touchy about recently out of date medical procedures and information being easily available. I also had to do a lot of research into 1986 because even though I lived through the 80s my memory is a bit jumbled up as to what was from which year, so I had to verify a lot of stuff and I’m sure I got something wrong. The most difficult research for me, personally, was actually about Chicago as a setting. My publisher helped me consult with author Malon Edwards, who is from Chicago, to help me avoid getting things drastically wrong. I don’t think I got it perfect, but the information Malon gave me helped me drastically improve several scenes and firmly ground them in Chicago with details I never could have gotten on my own.

Minerva:  Alex is the easiest character for me to write, with Hannah a very close second. She’s a little more difficult because she’s a teenager and I have to switch over to that mindset. Alex is easy because (this is going to sound really weird) he’s very broken-in like a favorite pair of jeans. He’s just so settled in who he is without being closed off from everything that his actions and reactions are very grounded. Hannah is more reactionary. The hardest character to write is anything with is Hannah’s brother, Zachariah. His brain just creeps me out.

TQ:  Which question about Take On Me do you wish someone would ask? Ask it and answer it!

Minerva:  I wish someone would ask about the wider world in Take On Me. The world starts out very zoomed in on Alex and Hannah and as the story progresses over the next two books it zooms out to show more and more about the world. Hannah and Alex are uniquely suited characters to slowly unveil the world due to being on the periphery of different groups, families, and factions.

TQ:  Give us one or two of your favorite non-spoilery lines from Take On Me.

She poked at the garlic bulb. “How do I get it open?”
He reached above his head, pulled down a small saucepan, and handed it to her without turning away from the beef. “Hit it.”
There was a very loud thunk behind Alex.
“Uhm, Alex?”
Alex slid the fry pan to the only empty burner and turned around. Hannah stood at arm’s length from the cutting board, the saucepan in her hand. Garlic skin clung to the bottom of the pan like the mangled wings of a crushed fly. The smell of raw garlic filled the kitchen from the obliterated smear splattered over the counter and part of the wall.
Alex covered his mouth in shock. “You killed it!”
“I… I…”
He doubled over in laughter and tears ran down his face.
“It’s not funny.”
Alex gasped for breath. “Headline…” He waved his hand in front of him. “Garlic Murdered — Vampires Suspected.”
A chuckle escaped before she could scowl it out of existence.

Minerva:  Take On Me is the first of three books we’re rapid releasing. The second book, Cruel Summer comes out in December, with the third, Running Down a Dream in February. We’re hoping when all three books are out we can put out a print collection of the three together for people who aren’t as keen on ebooks. I have a lot more stories and characters in this world that I can write about in the future. I know there’s one story in particular my editor hopes to force me to write in the future. I’m not planning on The Shattered Ones being a 24 book read them all series. My hope is to do lots of one-shot stories and short series within the world. 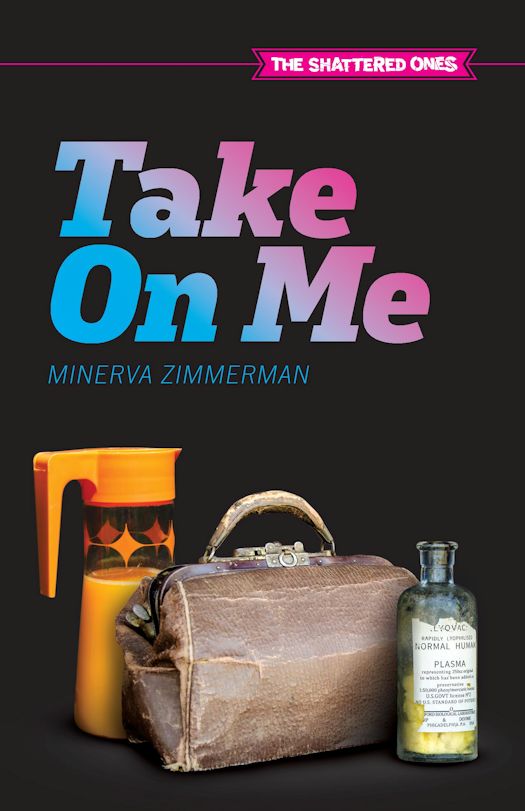 Take On Me is the first book in a new series called The Shattered Ones. Book 2, Cruel Summer, is out in December, and Book 3, Running Down a Dream, in February.

Turning someone you don’t know into a vampire probably violates the Hippocratic oath. But Alex wasn’t really thinking about that when he found a girl bleeding out in his shower.

Being turned into a vampire isn’t as cool as it sounds. Especially when all Hannah wanted to be was dead. She thought she had finally escaped her brother. Until she woke up. Alive? Undead? Whatever. And now Hannah is stuck with the uncoolest vampire in existence. 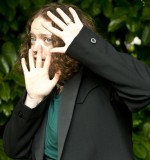 Minerva Zimmerman is a statistically chaotic neutral writer of tragically funny fiction. She lives in rural Oregon and works as a museum professional. She occasionally blogs at minervazimmerman.com and spends too much time on Twitter @grumpymartian.