Review: The Miniaturist by Jessie Burton 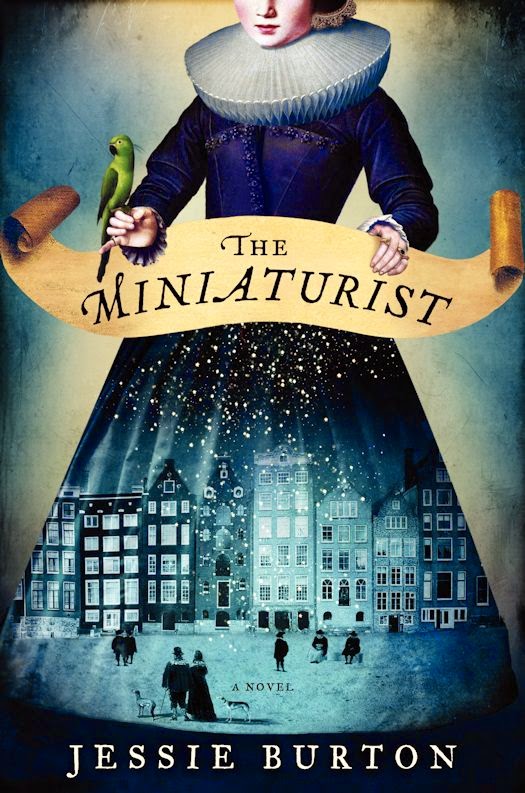 Set in seventeenth century Amsterdam—a city ruled by glittering wealth and oppressive religion—a masterful debut steeped in atmosphere and shimmering with mystery, in the tradition of Emma Donoghue, Sarah Waters, and Sarah Dunant.

”There is nothing hidden that will not be revealed . . .“

On a brisk autumn day in 1686, eighteen-year-old Nella Oortman arrives in Amsterdam to begin a new life as the wife of illustrious merchant trader Johannes Brandt. But her new home, while splendorous, is not welcoming. Johannes is kind yet distant, always locked in his study or at his warehouse office—leaving Nella alone with his sister, the sharp-tongued and forbidding Marin.

But Nella’s world changes when Johannes presents her with an extraordinary wedding gift: a cabinet-sized replica of their home. To furnish her gift, Nella engages the services of a miniaturist—an elusive and enigmatic artist whose tiny creations mirror their real-life counterparts in eerie and unexpected ways . . .

Johannes’ gift helps Nella to pierce the closed world of the Brandt household. But as she uncovers its unusual secrets, she begins to understand—and fear—the escalating dangers that await them all. In this repressively pious society where gold is worshipped second only to God, to be different is a threat to the moral fabric of society, and not even a man as rich as Johannes is safe. Only one person seems to see the fate that awaits them. Is the miniaturist the key to their salvation . . . or the architect of their destruction?

Enchanting, beautiful, and exquisitely suspenseful, The Miniaturist is a magnificent story of love and obsession, betrayal and retribution, appearance and truth.

Young Nella Brandt comes to Amsterdam to join her husband, Johannes, and his household – sister Marin, servant Cordelia, and manservant Otto. While Johannes is years older than Nella, she has dreams of what being a wife might mean for her, and those dreams are crushed over time. Each of the household members seem to hold some important secret.

Johannes is one of the wealthiest merchants in the city, sailing around the world to sell and buy goods all over. Cordelia is a sweet, but gossipy girl not much older than 18-year-old Nella herself. She attempts to befriend the frightened and lonely wife, trying to convince her that she could be happier if she tried. Otto is a more mysterious figure, a former black slave raised by Johannes to be a gentleman, and not accepted well by Amsterdam society. Marin, Johannes' sister, is an uptight spinster who at first appears to resent Nella’s intrusion in the household.

Marin is a strange, contradictory character. While she practices an outward rejection of any niceties in life – eating dried herring for breakfast and using cheap candles in the main areas – her inner life is rich and elegant. She lines her plain clothing with velvet and ermine, secretly eats candied walnuts, and has exotic maps and items from Johannes' worldwide travels decorating her bedroom.

Johannes himself is quite a bit older than Nella and has no use for a wife whatsoever. However, Nella’s gentle and kind spirit appeals to him, and his bridal gift to her is a large, elaborate dollhouse that is almost an exact model of their home. Nella at first is offended by the gift, thinking that it was a statement on her youth, but over time she becomes fascinated with the house and the miniatures that she receives for its interiors.

It is here that the mystery of the story begins – for the miniaturist appears to know Nella’s home and family better than Nella does herself. Oddly enough, some of the miniatures seem to have characteristics that predict what might happen to them in the future. Most of the novel centers on Nella’s search for the miniaturist, wanting to understand what the person is trying to tell her with the gifts that are sent.

The Miniaturist is a delicious fairy-tale pulled to novel length. I was delighted with the language and the detail that Jessie Burton includes in her story. She has recreated Amsterdam society in the 16th century – a time when its citizens were both widely liberal in their efforts to make money, but strangely conservative in their day-to-day life. The description of the main church with the skeletons buried directly beneath the flooring and the accompanying smell that results left me with a bad taste in my mouth, but the detail added to the overall reality of the tale. Burton has written one of the best novels that I have read yet this year. No wonder it was such a phenomenon when it was released last year.


Note: You may read an excerpt from The Miniaturist here.
Posted by Qwill at 11:00 AM