Review: Magic and Loss by Nancy A. Collins 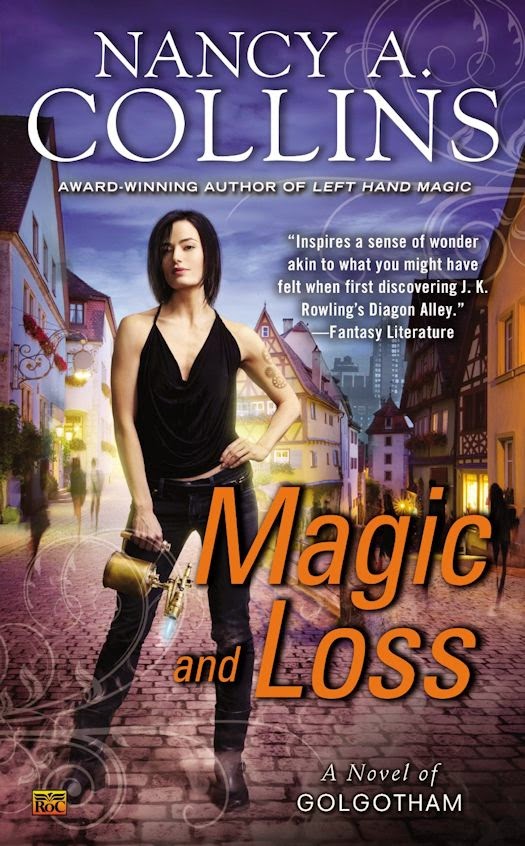 Located on Manhattan’s Lower East Side, Golgotham has been the city’s supernatural district for centuries. Populated by creatures from myth and legend, the neighborhood’s most prominent citizens are the Kymera, a race of witches who maintain an uneasy truce with the city’s humans…

It has been several months since Tate Eresby developed her new magical ability to bring whatever she creates to life, but she is still learning to control her power. Struggling to make a living as an artist, she and Hexe can barely make ends meet, but they are happy.

That is until Golgotham’s criminal overlord Boss Marz is released from prison, bent on revenge against the couple responsible for putting him there. Hexe’s right hand is destroyed, leaving him unable to conjure his benign magic. Attempts to repair the hand only succeed in plunging Hexe into a darkness that can’t be lifted—even by news that Tate is carrying his child.

Now, with her pregnancy seeming to progress at an astonishing rate, Tate realizes that carrying a possible heir to the Kymeran throne will attract danger from all corners, even beyond the grave…

Magic and Loss is Nancy Collins’ third novel about Golgotham, a supernatural neighborhood in New York City where Kymerans and humans come together to celebrate magic and artistry in concert. In the first two novels, we learned about the human, Tate Eresby, an heiress cut off by her family for becoming an artist who manipulates metal rather than painting simple watercolors. In addition, Hexe is the Kymeran landlord with whom she falls in love – and also the heir to the Kymeran throne. He also has been disowned by his family for trying to be an artist. The first two novels both focused on the difficulties of love between different species, with love conquering all. Magic and Loss picks up Tate and Hexe’s story as the couple have been together for awhile and are still struggling.

For me, the major enjoyment in these stories is the setting of Golgotham itself and its various inhabitants. This is where Collins has gotten creative – she has taken mythical creatures and reproduced them in New York City. So there are centaurs, who are in charge of the transportation and deliveries within the area; leprechauns and other Wee Folks, including brownies and pixies; satyrs, nymphs, and fauns; as well as minotaurs, trolls, ghouls, and goblins. The concept is the Kymerans came from another magical world and were exiled to earth along with these others for performing or simply being magic.

This novel focuses on a rather glum time in Tate and Hexe’s relationship. Although Tate becomes pregnant with the newest heir to the throne, Hexe is disfigured as punishment for their having sent Boss Marz to prison for a time. Hexe seeks out a magical implement to compensate for the disfigurement; however, the item seems to poison his mental state. Tate desperately loves Hexe but is unwilling to stay with him and jeopardize their child. So about halfway through the story, she leaves him.

Needless to say, Tate does not fully give up on Hexe and still attempts to bring him back to sanity. I was pleased that she was willing to leave her relationship to protect her child. Too often in reality, people remain in dangerous relationships despite the damage done to both themselves and their children. In this case, I believe Tate did the right thing in making an ultimatum to Hexe that he must change if they are too succeed as a couple.

Overall, Collins does a terrific job creatively when it comes to magic and how it might exist in a world today. I have particularly enjoyed this trilogy and cannot wait to see what new idea she might bring forth in her next story.