Over the weekend, Jason M. Hough treated his newsletter subscribers to the reveal of the cover for his next novel, Zero World. This is the first novel in Jason's Conduit series and will be published by Del Rey on September 15th in North America. Jason is the author of the fabulous Dire Earth Cycle novels (3 novels and 1 short). So without further ado, Zero World: 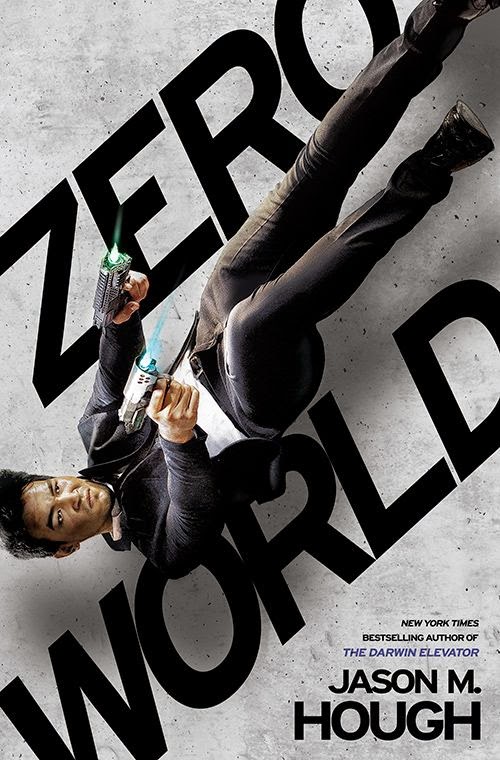 Published in rapid succession, Jason M. Hough’s first three novels, The Darwin Elevator, The Exodus Towers, and The Plague Forge, earned mountains of praise and comparisons to such authors as James S. A. Corey and John Scalzi. Now Hough returns with a riveting near-future spy thriller that combines the adrenaline of a high-octane James Bond adventure with mind-blowing sci-fi speculations worthy of Christopher Nolan’s Inception.

Technologically enhanced superspy Peter Caswell has been dispatched on a top-secret assignment unlike anything he’s ever faced. A spaceship that vanished years ago has been found, along with the bodies of its murdered crew—save one. Peter’s mission is to find the missing crew member, who fled through what appears to be a tear in the very fabric of space. Beyond this mysterious doorway lies an even more confounding reality: a world that appears to be Earth’s twin.

Peter quickly discovers that this mirrored world is indeed very different from his home, and far more dangerous. Cut off from all support, and with only days to complete his operation, Peter must track his quarry alone on an alien world. But nothing can prepare him for what awaits on the planet’s surface, where his skills will be put to the ultimate test—and everything he knows about the universe will be challenged in ways he never could have imagined.


Jason M. Hough (pronounced 'Huff') is the bestselling author of THE DARWIN ELEVATOR, THE EXODUS TOWERS, and THE PLAGUE FORGE. In a former life he was a 3D artist, animator, and game designer (Metal Fatigue, Aliens vs. Predator: Extinction, and many others). He has also worked in the fields of high-performance cluster computing and machine learning.

THE DARWIN ELEVATOR began in 2008 as a Nanowrimo project.  The book released on July 30th 2013 in the US and reached the New York Times Bestseller list the following week. DARWIN is Jason’s first published fiction.

The trilogy, collectively called THE DIRE EARTH CYCLE, was released in the summer of 2013. Jason's next book, ZERO WORLD, is due out in September 2015.

He lives near Seattle, Washington with his wife, two young sons, and a dog named Missbuster.