The Qwillery is thrilled to welcome Elizabeth Bear with a Guest Blog about Karen Memory, a Steampunk adventures set in the Wild West. Karen Memory was published on February 3rd by Tor. 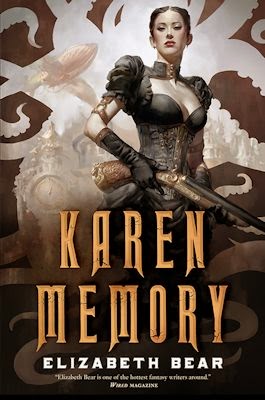 Hi! I’m Elizabeth Bear, and I’ve been invited here to The Qwillery by Sally to talk about my new book, Karen Memory, and people whose last names are nouns. I mean, sorry, about the intersection between Steampunk and the American West, and why these things seem to go together so well.
I believe there are three reasons, and those reasons are:
1) Brown
2) Buckles
3) Leather
4) Bustles
Oh, drat. That was four reasons. Well, we all get carried away sometimes!
More seriously, there are a number of historical and genre reasons why this all links up so well.
One is that, quite simply, the original source material inspiration for steampunk is largely Victorian-period science fiction, fantasy, and horror. It’s Jules Verne, H. G. Wells, Bram Stoker, Robert Louis Stevenson—And who do you go to, if you’re the genteel professional protagonist of a Victorian science fiction novel and you need some heads busted and you can’t get your hands on a Norwegian harpoonist or two?
Why, you look up a Texan, of course! Preferably one with a shady past as a shootist or ruffian, though an ordinary run of the mill Texan will probably do. It worked for Jonathan Harker, after all!
It’s sometimes hard to remember that the time period of Westward expansion in the United States coincides quite neatly with the Victorian period in England. They’re coterminous. Your Mr. Sherlock Holmes of Baker Street, London and your Doctor John Henry Holliday of Tombstone, Arizona are very nearly exact contemporaries. If Holmes were not fictional, Holliday would have been just a little over two years older.
There is no disconnect between the anti-Chinese riots in Seattle and Jack the Ripper’s Whitechapel. They exist on a continuum. You could take a series of trains and ships and travel from one to the other.
And it would be even easier if you happened to have an airship at your disposal.
There are also twinned literary traditions at work. The Western parallel to science fictional worlds of a Jules Verne or an H. G. Wells is the Weird Western, a subgenre that was arguably founded by Robert E. Howard of Conan the Barbarian fame in 1932, but which was largely abandoned (the lonely homesteaders included Joe Lansdale and Stephen King, both producing some brilliant work) until the 21st century, when it flowered like a yellow rose planted in arid soil that has spent years establishing deep tap roots.
There are some exceptions. One of the seminal works of steampunk is, of course, the television show The Wild Wild West (1965-1969), involving the adventures of two Secret Service Agents equipped with a 19th century James Bond’s array of gadgetry in order to fight evil. And there was the 1990s steampunk and sorcery role playing game Castle Falkenstein, which included a Wild West supplement that allowed for such character accomplishments as “spellslinging.”
In the current millennium, though, the Weird West has blossomed right alongside steampunk (Goodreads will provide the curious reader with a number of fine lists of novels for perusal), and it makes perfect sense to me to marry the two. It’s a frequent criticism that books set in the past must thereby be nostalgic for it, but it seems to me that they also allow us the opportunity to process and critique our history and the received wisdom of previous generation—and often, through new sets of eyes.
History is a series of artificial narratives that are always being constructed. Therefore, it is necessary that it is also always being deconstructed.
We don’t return to the past to relive it. We return to the past to sort through the wreckage and see what we can learn. 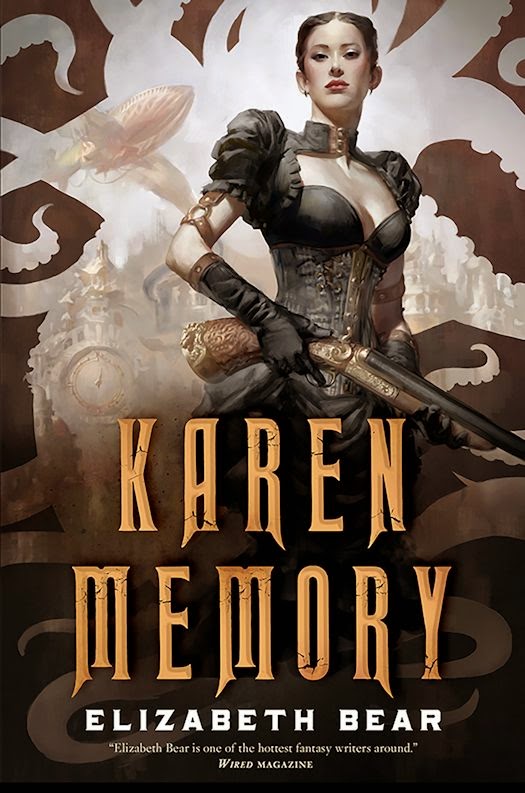 “You ain’t gonna like what I have to tell you, but I'm gonna tell you anyway. See, my name is Karen Memery, like memory only spelt with an e, and I'm one of the girls what works in the Hôtel Mon Cherie on Amity Street. Hôtel has a little hat over the o like that. It's French, so Beatrice tells me.”

Set in the late 19th century—when the city we now call Seattle Underground was the whole town (and still on the surface), when airships plied the trade routes, would-be gold miners were heading to the gold fields of Alaska, and steam-powered mechanicals stalked the waterfront, Karen is a young woman on her own, is making the best of her orphaned state by working in Madame Damnable’s high-quality bordello. Through Karen’s eyes we get to know the other girls in the house—a resourceful group—and the poor and the powerful of the town. Trouble erupts one night when a badly injured girl arrives at their door, beggin sanctuary, followed by the man who holds her indenture, and who has a machine that can take over anyone’s mind and control their actions.  And as if that wasn’t bad enough, the next night brings a body dumped in their rubbish heap—a streetwalker who has been brutally murdered.

Bear brings alive this Jack-the-Ripper yarn of the old west with a light touch in Karen’s own memorable voice, and a mesmerizing evocation of classic steam-powered science.

ELIZABETH BEAR was the recipient of the John W. Campbell Award for Best New Writer in 2005. She has won two Hugo Awards for her short fiction, a Sturgeon Award, and the Locus Award for Best First Novel. She is the author of the acclaimed Eternal Sky series. Bear lives in Brookfield, Massachusetts.

What:  One entrant will win a Hardcover copy of Karen Memory by Elizabeth Bear from Tor Books. US/CANADA ONLY

Who and When:  The contest is open to all humans on the planet earth with a US or Canadian mailing address. Contest ends at 11:59 PM US Eastern Time on February 19, 2015. Void where prohibited by law. No purchase necessary. You must be 18 years old or older to enter.