Please welcome Sheila Connolly to The Qwillery. An Early Wake, the 3rd County Cork Mystery, will be published on February 3rd by Berkley. 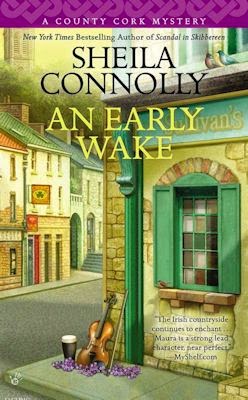 Have you ever spent an evening in an Irish pub? I mean a real one, not one of those with shamrocks and plastic shillelaghs on the walls, and green beer (what do they put in that stuff?). The real ones are dark and dingy, and most people inside seem to know each other. There are those who go there for the talk, and those who go there to avoid talking. And often there’s music.

I write about an Irish pub in Ireland, called Sullivan’s. It’s a small place in a small town in the far corner of the country. My twenty-something American protagonist Maura Donovan inherited it, and she’s still trying to figure out how things work in Ireland. She’s found some happy surprises, and some not so happy, like a body in the pub. But my new book, An Early Wake, is not so much about murder as about memories and music. The song lyrics above, which date back at least to 1770, captures the spirit of the wake that’s held at the pub for a musician who came back to reunite with old friends for one last night of making music together.

The books in this series are based on a real pub, Connolly’s of Leap. No relation that I know of, but I haven’t given up looking (my grandfather was born a few miles away). I know the owner and her family, and her dog and her cat. She’s been great about giving me details about how a real pub operates, and one of the biggest compliments she’s paid me is that having a woman running the place is important, and that I got Maura right. (She also hands out my books to all her friends!)

Connolly’s was known for music—not the tin whistle and fiddle kind, but contemporary music, played by musicians from all over Ireland. You never knew who might walk in the door just to jam with whoever was there, but you might recognize them from a few recordings. The owner’s late husband was the one who brought the players in; he was a musician himself (a member of The Mighty Shamrocks), as is his son. The pub’s been shut since he passed on, but if all goes well, it’ll be back again this year—with the music.

There’s something wonderful about music in Ireland. Everybody’s a musician, or has his or her signature song, and often everyone will contribute to an evening of music. There’s much that is funny, and much that is sad in the songs, but everyone knows them all. The Parting Glass captures a lot of that, and has been doing that for over three hundred years. So how could I not write about music in the pub? 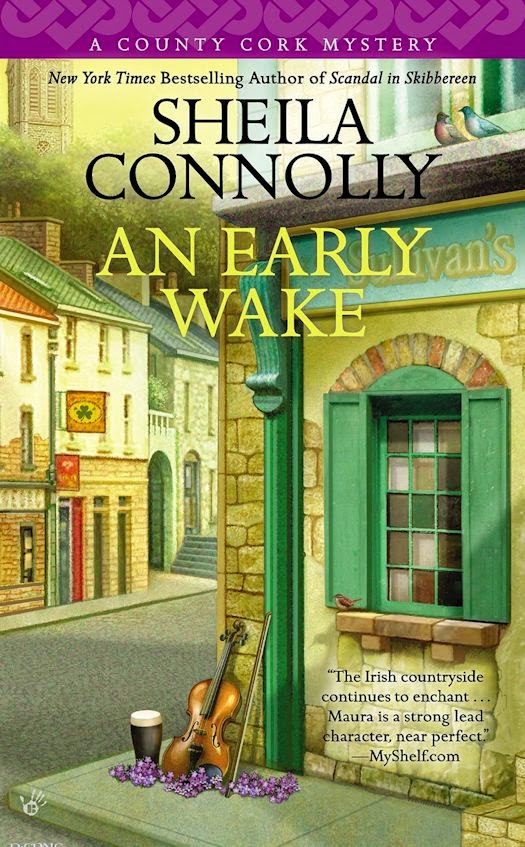 Pub owner Maura Donovan may have Irish kin, but she doesn’t seem to have the luck of the Irish. Who could have foreseen that bringing live music back to Sullivan’s Pub would lead to a dead musician?

Summer is ending in County Cork, Ireland, and with it the tourist season. Expat Maura Donovan is determined to keep Sullivan’s Pub in the black as the days grow shorter—but how? When she hears that the place was once a hot spot for Irish musicians who’d come play in the back room, she wonders if bringing back live music might be Sullivan’s salvation.

As word gets out, legendary musicians begin to appear at the pub, and the first impromptu jam session brings in scores of music lovers. But things hit a sour note when Maura finds a dead musician in the back room the next morning. With a slew of potential suspects, it’s going to take more than a pint and a good think to force a murderer to face the music. 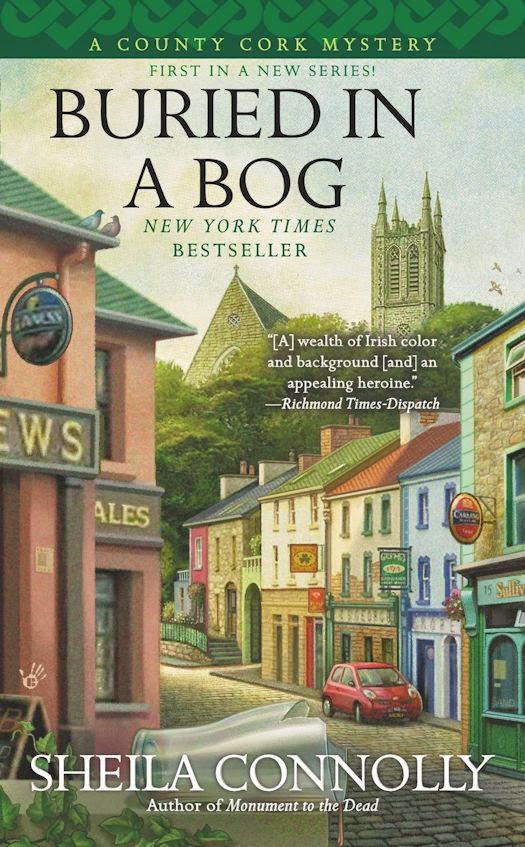 National bestselling and Agatha Award-nominated author Sheila Connolly introduces a brand-new series set in a small village in County Cork, Ireland, where buried secrets are about to rise to the surface...

Honoring the wish of her late grandmother, Maura Donovan visits the small Irish village where her Gran was born—though she never expected to get bogged down in a murder mystery. Nor had she planned to take a job in one of the local pubs, but she finds herself excited to get to know the people who knew her Gran.

In the pub, she’s swamped with drink orders as everyone in town gathers to talk about the recent discovery of a nearly one-hundred-year-old body in a nearby bog. When Maura realizes she may know something about the dead man—and that the body’s connected to another, more recent, death—she fears she’s about to become mired in a homicide investigation. After she discovers the death is connected to another from almost a century earlier, Maura has a sinking feeling she may really be getting in over her head... 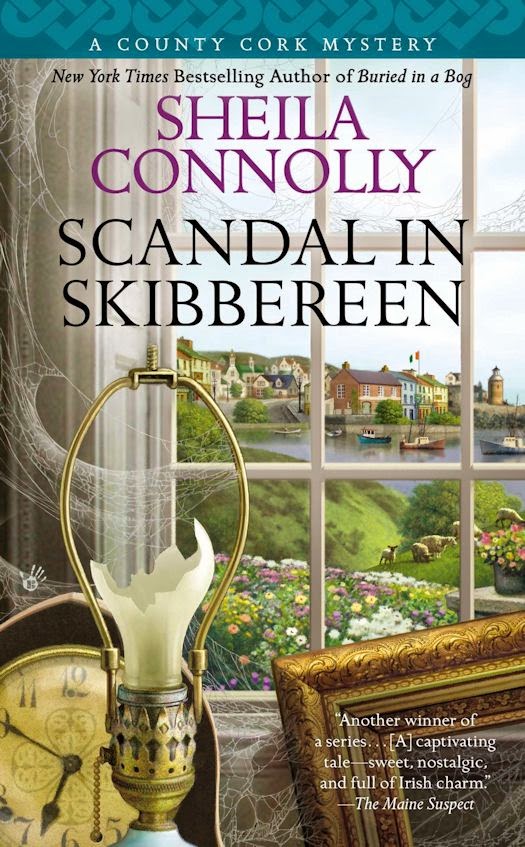 As the new owner of Sullivan’s Pub in County Cork, Ireland, Maura Donovan gets an earful of all the village gossip. But uncovering the truth about some local rumors may close her down for good…

Bostonian Maura is beginning to feel settled in her new Irish home, just in time for summer tourist season to bring fresh business to her pub. But the first traveler to arrive is thirsty for more than just a pint of Guinness. Althea Melville is hot on the trail of a long-lost Van Dyck painting.

Maura agrees to help Althea meet with the residents at the local manor house, the most likely location of the missing art. But when the manor’s gardener is found murdered, Maura wonders what Althea’s real motives are. Now, to solve the secret of the lost portrait and catch a killer, Maura will have to practice her Irish gift of gab and hunt down some local history—before someone else is out of the picture… 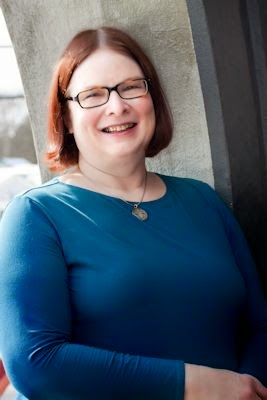 Sheila Connolly, Anthony and Agatha Award–nominated author, writes three bestselling cozy mystery series for Berkley Prime Crime. Her Museum Mysteries are based in Philadelphia, her Orchard Mysteries take place in rural Massachusetts, and her County Cork Mysteries are set in Ireland, and include Buried in a Bog and Scandal in Skibbereen, both New York Times bestsellers. In addition, she writes an paranormal romance series, which began with Relatively Dead in 2013. She has also published Once She Knew, a romantic suspense, and Reunion with Death, a traditional mystery set in Tuscany, as well as a number of short stories. She lives in Massachusetts with her husband and three cats, and visits Ireland as often as she can.

What:  One entrant will win a Mass Market Paperback copy of An Early Wake by Sheila Connolly from the publisher. US ONLY

Who and When: The contest is open to all humans on the planet earth with a US mailing address. Contest ends at 11:59 PM US Eastern Time on February 10, 2015. Void where prohibited by law. No purchase necessary. You must be 18 years old or older to enter.