Interview with Tonya Kappes and Review of A Ghostly Undertaking - February 24, 2015 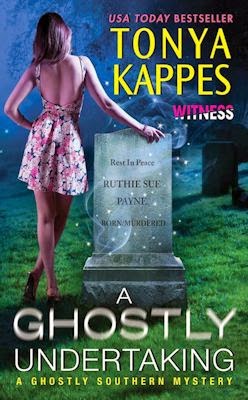 TQ:  Welcome to The Qwillery! You've written more than fifteen novels and four novellas, has your writing process changed (or not) from your first novel to your most recent? What is the most challenging thing for you about writing?

Tonya:  I have learned a ton from the first novel to my most recent. In the beginning I didn't take the time to create more of a setting for the readers to get lost. My small town setting have become just as much of a main character as the protagonist.

The editing process is the most challenging part of my writing process. By the time my editor sees it, I have read and reread and reread a million times over the novel. Though I love my books, rereading them over and over is a little trying at times, but I know it's necessary to put out a great product readers are going to fall in love with.

As a craft, I'm always learning and growing. If I wasn't. . .I'd get really nervous.

Tonya:  I'm a panster. I come up with a possible story idea and I let that sit in my head for a couple of months. It rolls around as the characters and setting begin to form in my head and I begin to jot down tidbits. By the time I sit down to write the first word, I have a great idea of where I want to start the novel and how I want to end the novel.

Since I'm a mystery writer, I tend to write backwards and plow through. The characters talk to me and the ideas I had in the beginning are much different than the end product.

TQ:  Your most recent novel is A Ghostly Undertaking (A Ghostly Southern Mystery 1). What inspired you to write mysteries with paranormal/supernatural elements?

Tonya:  There are so many cozy mysteries out there where the protagonist is in some sort of craft and I wanted to write a mystery where there was something different. When I decided on a funeral home director, I let that hang around my head for about two years and played the "what if" the funeral home was haunted which turned into "what if" the ghost is/was a client/pillar of the community. It snowballed from there. Immediately I began to write down different plots and story lines for a series. Plus ghosts can be scary or funny and I picked the funny because I don't like to be scared! I knew if I enjoyed writing the Ghostly Southern Mystery Series, my readers were going to love it too.

What makes the mystery a "Southern" mystery?

I grew up in a small southern town and being southern is ingrained in me. The waving neighbors, the front porch rocking chairs, the boutique shops along main street, the parades, small town gossip, going to every funeral and birthday party, and the slang was my life. When I was world building my small southern town, I made sure I incorporated all of those elements into the storyline and plot. The charm, the gossip, the small knit community, quirky characters, and a murder make for a great southern mystery.

TQ:  Do you base your paranormal/supernatural elements on existing lore, make things up or both?

Tonya:  Definitely both and then add the question of "what if." In every one of my novels I pull a little bit of my life and my imagination or folk lore. Once I have the paranormal element in mind, I put a spin of "what if" this happened. Since I write with humor, the crazier the better. I find myself giggling a lot.

TQ:  What sorts of research have you done for the Ghostly Southern Mysteries? What is the oddest bit of information that you’ve come across in your research?

Tonya:  I have a friend who is an undertaker. It's a family business that's trickled down from her grandparents, her parents, and now her son is working there. She has a lot of stories and great knowledge of the industry. Plus she had a lot of strange requests from families of her clients that are a hoot.

Burial has come a long way throughout time, as well as the actual burial ceremony. I have been fascinated by the different types of burials in different cultures. The tomb stones have also come a long way. And the idea of being buried alive is just downright frightening for me. During my research of how they determined someone was dead, I found out the statistics of someone being buried alive was high. So much so, they began to add a bell to the top of the gravestone with a rope dangling down into the ground and in a small hole of the wooden casket. If the person was buried alive, they were able to pull the rope and ring the bell, signaling they were buried alive. I knew I had to use that image on a cover and HarperCollins loved the idea too. You will see A Ghostly Murder, the fourth book, has a gravestone with a bell on top. Love that!

TQ:  Tell us something about A Ghostly Undertaking that is not in the book description.

Tonya:  The reader will laugh out loud at some of the very colorful characters in A GHOSTLY UNDERTAKING.

TQ:  In A Ghostly Undertaking who was the easiest character to write and why?

Tonya:  Definitely the ghost, Ruthie Sue Payne. She is a spitfire and I love writing a snarky, funny, eccentric character. It makes writing so much more fun when I can let loose and let my characters have a personality.

The hardest and why? It's not the characters that was the hardest to write, it's the relationship between Emma Lee Raines and Sheriff Jack Henry Ross. I'm not a romance writer and I forget to put the little spark between them.

Tonya:  I'm thrilled the next three books in the series are going to be released this year! I'm excited the readers aren't going to have to wait for a year or so to get the next ones. A Ghostly Grave will be released in March, A Ghostly Demise in August, and A Ghostly Murder in September.

Tonya:  Thank you for having me! I truly appreciate your kindness. 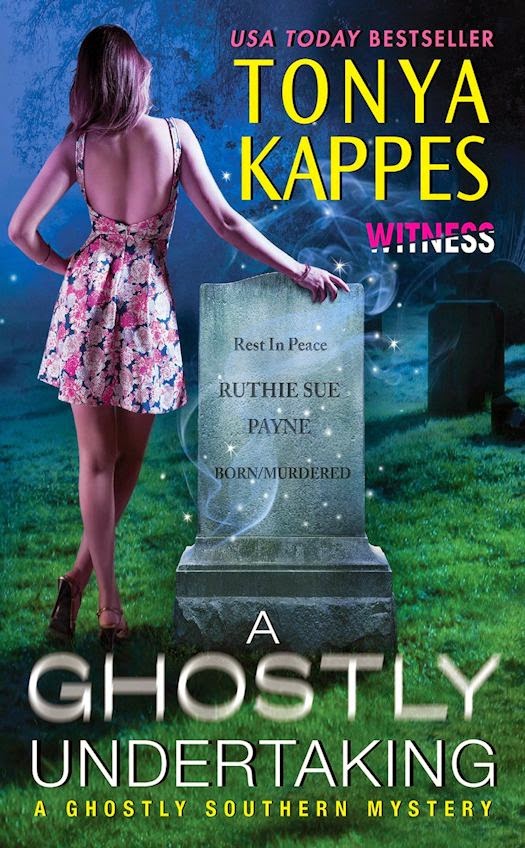 Bopped on the head from a falling plastic Santa, local undertaker Emma Lee Raines is told she's suffering from “funeral trauma.” It's trauma all right, because the not-so-dearly departed keep talking to her. Take Ruthie Sue Payne—innkeeper, gossip queen, and arch-nemesis of Emma Lee's granny—she's adamant that she didn't just fall down those stairs. She was pushed.

Ruthie has no idea who wanted her pushing up daisies. All she knows is that she can't cross over until the matter is laid to eternal rest. In the land of the living, Emma Lee's high-school crush, Sheriff Jack Henry Ross, isn't ready to rule out foul play. Granny Raines, the widow of Ruthie's ex-husband and co-owner of the Sleepy Hollow Inn, is the prime suspect. Now Emma Lee is stuck playing detective or risk being haunted forever.

A Ghostly Undertaking is the first in the new Ghostly Southern Mystery series by Tonya Kappes. Emma Lee Raines with her sister run the family business - the Eternal Slumber Funeral Home. Emma can see and communicate with ghosts after being hit on the head by a falling Santa. While 'being hit on the head and can now see ghosts' has been done before, Kappes adds a very nice touch with Emma being able to touch and be touched by ghosts.

Emma is handling Ruthie Sue Payne's funeral when Ruthie reveals to Emma that she was murdered. Emma is out of her depth when it comes to sleuthing and she often puts herself at risk, but she is trying to help Ruthie and her own granny who is under suspicion for Ruthie's murder. Things get more and more complicated as the story progresses as there is more than one reason that Ruthie might have been murdered. On top of trying to solve the mystery, Emma contends with everyone thinking she is crazy, coming to grips with her talent, and co-running a funeral home.

The setting of Sleepy Hollow, Kentucky is very well done. I got a real sense of community, of people who had known each other their entire lives. There is an interesting cast of characters - each different and engaging (mostly).  I'm looking forward to getting to know them better. There is also a lovely romance developing that was nicely done and did not overwhelm the mystery.

A Ghostly Undertaking is a fast paced and very fun mystery filled with Southern charm and characters that I can't wait to spend more time with. 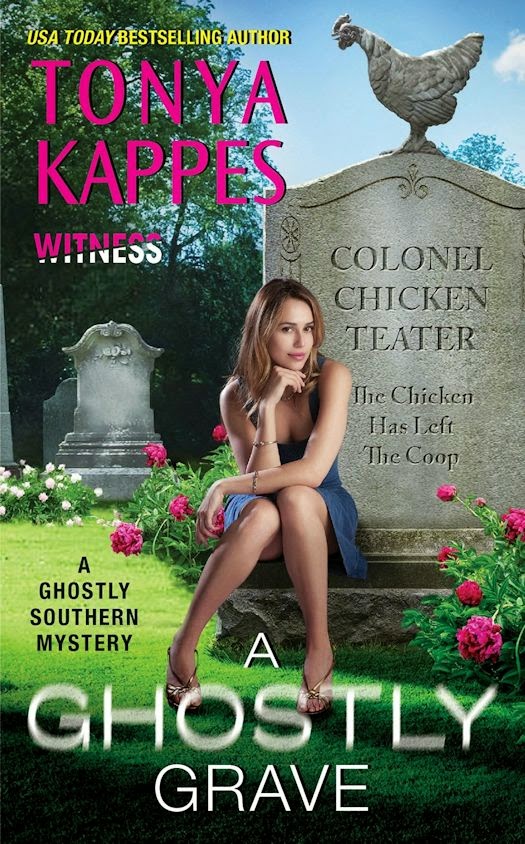 There's a ghost on the loose—and a fox in the henhouse.

Four years ago, the Eternal Slumber Funeral Home put Chicken Teater in the ground. Now undertaker Emma Lee Raines is digging him back up. The whole scene is bad for business, especially with her granny running for mayor and a big festival setting up in town. But ever since Emma Lee started seeing ghosts, Chicken's been pestering her to figure out who killed him.

With her handsome boyfriend, Sheriff Jack Henry Ross, busy getting new forensics on the old corpse, Emma Lee has time to look into her first suspect. Chicken's widow may be a former Miss Kentucky, but the love of his life was another beauty queen: Lady Cluckington, his prize-winning hen. Was Mrs. Teater the jealous type? Chicken seems to think so. Something's definitely rotten in Sleepy Hollow—and Emma Lee just prays it's not her luck. 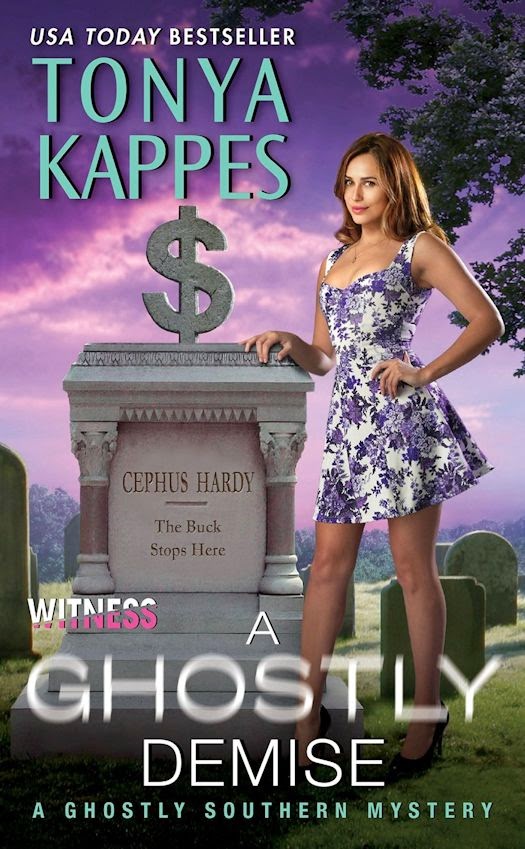 The prodigal father returns—but this ghost is no holy spirit

When she runs into her friend's deadbeat dad at the local deli, undertaker Emma Lee Raines can't wait to tell Mary Anna Hardy that he's back in Sleepy Hollow, Kentucky, after five long years. Cephus Hardy may have been the town drunk, but he didn't disappear on an epic bender like everyone thought: He was murdered. And he's heard that Emma Lee's been helping lost souls move on to that great big party in the sky.

Why do ghosts always bother Emma Lee at the worst times? Her granny's mayoral campaign is in high gear, a carnival is taking over the town square, and her hunky boyfriend, Sheriff Jack Henry Ross, is stuck wrestling runaway goats. Besides, Cephus has no clue whodunit…unless it was one of Mrs. Hardy's not-so-secret admirers. All roads lead Emma Lee to that carnival—and a killer who isn't clowning around. 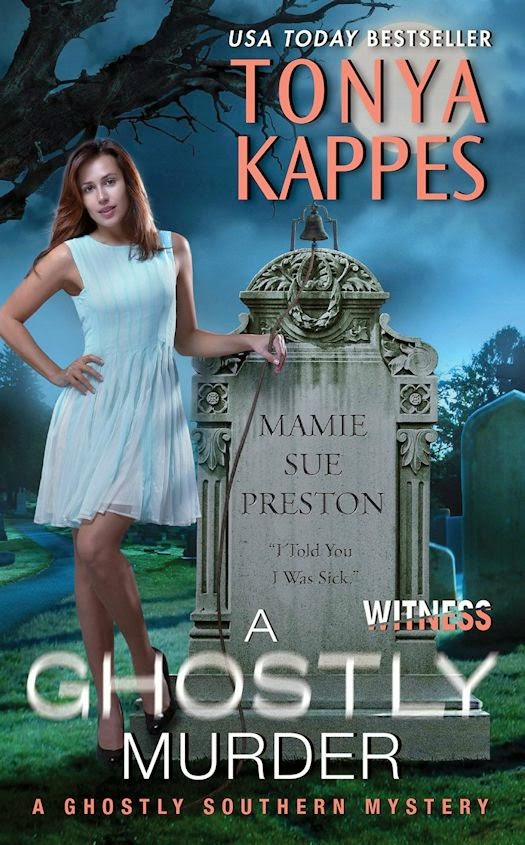 Tonya Kappes has written more than fifteen novels and four novellas, all of which have graced numerous bestseller lists including USA Today. Best known for stories charged with emotion and humor and filled with flawed characters, her novels have garnered reader praise and glowing critical reviews. She lives with her husband, two very spoiled schnauzers, and one ex-stray cat in northern Kentucky. Now that her boys are teenagers, Tonya writes full-time but can be found at all of her guys’ high school games with a pencil and paper in hand. Come on over and FAN Tonya on Goodreads.