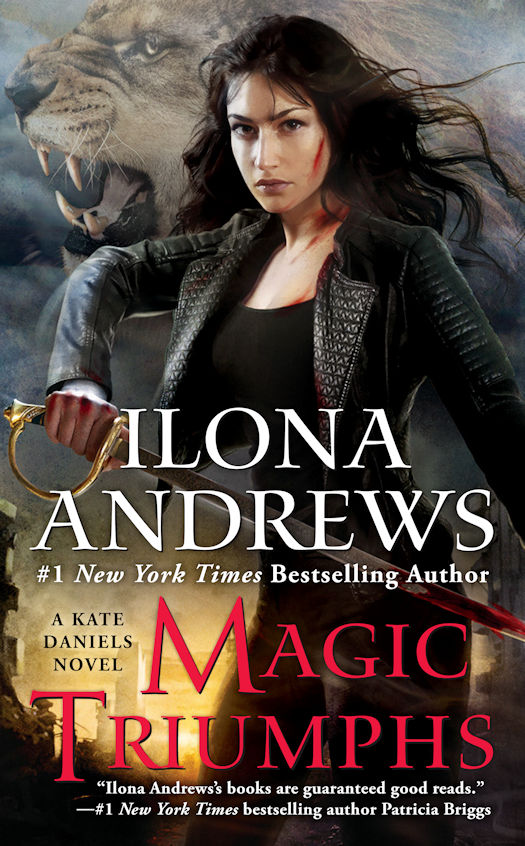 Mercenary Kate Daniels must risk all to protect everything she holds dear in this epic, can’t-miss entry in the thrilling #1 New York Times bestselling urban fantasy series.

Kate has come a long way from her origins as a loner taking care of paranormal problems in post-Shift Atlanta. She’s made friends and enemies. She’s found love and started a family with Curran Lennart, the former Beast Lord. But her magic is too strong for the power players of the world to let her be.

Kate and her father, Roland, currently have an uneasy truce, but when he starts testing her defenses again, she knows that sooner or later, a confrontation is inevitable. The Witch Oracle has begun seeing visions of blood, fire, and human bones. And when a mysterious box is delivered to Kate’s doorstep, a threat of war from the ancient enemy who nearly destroyed her family, she knows their time is up.

Kate Daniels sees no other choice but to combine forces with the unlikeliest of allies. She knows betrayal is inevitable. She knows she may not survive the coming battle. But she has to try.

Kate thought it was too good to be true. Over the past two years she has married her hunky shapeshifter Curran and had an adorable son, Conlan, her business is thriving and there is no sign of her megalomaniac father Roland who has tried kill her loved ones.....so far. However, when an ancient power decides that humanity has lived long enough and wants to purge the world Kate knows she has to make a stand. If she has to ally with the enemy then she is prepared to do what it takes to save everything and everyone she loves. War is on her doorstep and Kate isn't sure she has the power to survive.

I can't believe that it is finally here - Magic Triumphs the - 10th and final Kate Daniels instalment. I have been a fan from the very start and Kate has been one of my favourite heroines. There has been a lot of hype about Magic Triumphs and it doesn't disappoint. This story is almost more of a continuation of Iron and Magic* than it is of Magic Binds with the return of the soldiers and beasts that Hugh D'Ambray fought in the first book of the Iron Covenant series. I thought that this was an interesting re-use of a really scary baddy. Obviously Kate has grown up now  - a wife and mother and while she loves her new life she is desperate to keep her family safe. Roland has always been a threat to her and her family but Neig is the bigger threat and she isn't sure she has the ability to defeat them both. It is this vulnerability that makes Kate even more interesting as a character than she was before.

Andrews brings back so many of the characters that I have loved over the series - Andrea, Derek, Dali, Doolittle and Saiman. Even Grendel, the mutant poodle is back! However, when one of my newest favourite characters makes a dramatic appearance I actually did a fist pump and whooped. I can't really say that there was more character development in Magic Triumphs but there is 'rounding' out of a few of the lead characters - specifically Derek, Christopher, Erra and to a small extent Adora. Andrews uses the action and fight scenes to further establish Kate's relationships with regular characters and helps to setup the new ones. There are quite a few fight scenes and these all lead to the epic battle at the end.

Overall, I really enjoyed Magic Triumphs and thought the ending of the book and of the series was really satisfying. Ten books makes for a long series but this instalment was worth waiting for. Andrews avoided making the ending too sugary and sweet, which I appreciated. The epilogue is a bit of a tease and is creating A LOT of discussion on the blog. It's good that not everything was spelled out for us even though it is a bit of a very small cliffhanger. I am looking forward to see what Andrews has in store for us besides two more Hugh books (hurray!). Magic Triumphs is a great book and even better ending to a great series.


*See my review of Iron and Magic here.