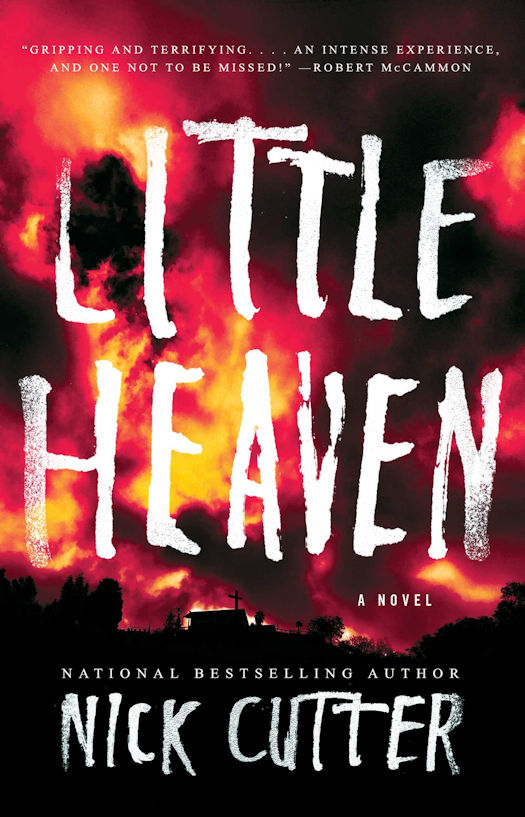 A “gripping and terrifying story…and one not to be missed” (Robert McCammon) from the acclaimed author of The Troop and The Deep!

A trio of mismatched mercenaries—Micah Shughrue, Minerva Atwater, and Ebenzer Elkins, colloquially known as “the Englishman”—is hired by young Ellen Bellhaven for a deceptively simple task: check in on her nephew, who may have been taken against his will to a remote New Mexico backwoods settlement called Little Heaven, where a clandestine religious cult holds sway. But shortly after they arrive, things begin to turn ominous. There are stirrings in the woods and over the treetops—and above all else, the brooding shape of a monolith known as the Black Rock casts its terrible pall. Paranoia and distrust soon grip the settlement. Escape routes are gradually cut off as events spiral toward madness. Hell—or the closest thing to it—invades Little Heaven. All present here are now forced to take a stand and fight back, but whatever has cast its dark eye on Little Heaven is marshaling its power—and it wants them all…

“A sprawling epic that can stand alongside the best of ‘80s King, Barker, and McCammon. Fun, nasty, smart, and scary, and in all the right places.” —Paul Tremblay, acclaimed author of A Head Full of Ghosts and Disappearance at Devil’s Rock

I’ve read and reviewed Nick Cutter before, and, once again, I was very entertained. Little Heaven is a time-jumping, monster-hunting, rescue mission. You heard me right, there’s a lot going on in this one, and yet Cutter’s skill at balancing everything without it getting cluttered or confusing is on point. In my previous Cutter review of The Troop, I mentioned he isn’t afraid of the gore, and this book also shows us that he’s not afraid of tickling your gag reflex.

Our heroes are Micha, Ebenezer and Minerva, a gun-toting band of mercenaries with a long history. They get the band back together to rescue a young boy in a dangerous cult. Cutter spends some time revealing their relationship by jumping back and forth between 1966 and 1980. While on this rescue mission, we learn that there are monsters hiding in the forests surrounding the compound. All of this is very familiar to Micha’s past and his long-lost daughter.

I’ve read from some other reviewers that Cutter borrows heavily from the King of Horror, but as I’ve never been a big fan of his I can’t speak to that. What I can say is that Cutter knows how to write action and horror in a very unique and engaging way. The only thing I’d change would be less gore, but I don’t see Cutter stopping this anytime soon. One thing I really liked in this book is the illustrations, there are not a lot, but I’ve always wished they were used more in Adult Fiction. There’s one illustration that I found particularly creepy.

Nick Cutter knows how to keep his readers turning pages and Little Heaven is no exception. As long as you don’t mind getting creeped out by the monsters and gore, you’ll enjoy this one. There is plenty of Adult Language and violence so this one is for Adults only. If you like your horror mixed with action, you’ll want to pick this one up.
Posted by Qwill at 6:10 AM