Guest Blog by Amber Fallon - I am Woman, Hear me Write


Please welcome Amber Fallon to The Qwillery. Amber is the Editor of Fright Into Flight which was published on September 4, 2018 by Word Horde. 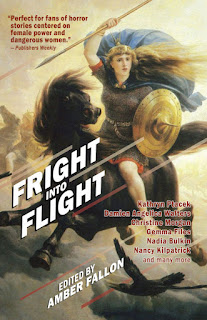 I am Woman, Hear me Write

“Women are too sensitive to write anything really scary.”

“There just aren’t that many women writing horror fiction.”

“The problem is that women just aren’t submitting their work.”

Do these statements sound as absurd to you as they do to me? Because in my opinion, all three of the above are basically crazy talk. And yet, all three are direct quotes from people who’ve either said them to me in person or made comments on my social media. People truly believe these things! The question is… why?

I have some opinions on that, and a lot of them have to do with what we, as readers, hold up as our standard of a “good story”. For years, the most significant, widely read, and recognized authors in the fiction realm, and especially within the horror genre, have been heterosexual white men. Now, that’s not to say that there aren’t hundreds, if not thousands, of truly talented and remarkable white men out there… but it is to say that they’ve had a lot dominance, historically speaking. That kind of saturation can have unintended consequences… things like the majority of readers using similar points of view as hallmarks for a good piece of fiction. That can mean that other points of view can become disorienting and uncomfortable, and thus “not good”, when really, it’s just a matter of exposure. Think of a picky kid eating nothing but chicken nuggets for years… then someone offers them a plate of broccoli. Of course it’s going to seem weird and maybe even “gross” to them… but given time and a few chances to try it, they might decide they like broccoli. The same goes for fiction.

Ask most readers to name a woman horror writer, and you’ll get similar answers: Mary Shelley or Shirley Jackson. Two remarkable women, to be sure, but just the tip of the metaphorical iceberg.

Some of the best, most powerful, most haunting horror fiction of the past decade has been penned by women. From the horrific-yet-beautiful prose of Livia Llewellyn to the powerfully brilliant, brutal words of Chesya Burke, from the brave, nuanced, and incredibly poignant stories from Hillary Monahan to the raw, sinuous, and ultimately unshakable imagery of Kristi DeMeester, plus dozens and dozens more in between, women have stabbed their flag deep into the heart of the horror genre.

Don’t believe me? Go pick up a book by Mary SanGiovanni or Sephera Giron. Or, if you’re really daring, and you’ve got the stomach for it, something by C.V. Hunt or Jessica McHugh.

Women are out there! We are writing horror fiction! We’re submitting, we’re publishing, we’re doing our best to spread the word and share our stories with as many people as we can reach.

To that end, I’ve edited an anthology called Fright Into Flight. All female authors, connected by the theme of flight. Some of these tales are visceral, gut wrenching, and terrifying, others are quiet, slow burning, and haunting. I’ve done my best to showcase a wide range of stories so that pretty much anyone can find something they’ll enjoy within these pages.

I hope you’ll consider picking up a book by a female author, especially one you haven’t read before. Creating a base of readers who demand diverse stories can only benefit the genre as a whole. 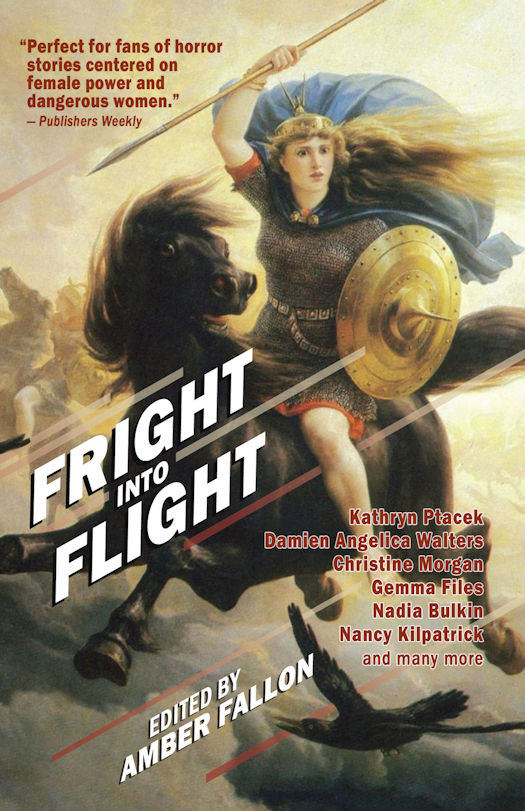 From the earliest depictions of winged goddesses to the delicate, paperwinged fairies of the Victorians, from valiant Valkyries to cliff-dwelling harpies, from record-setting pilots to fearless astronauts, women have long since claimed their place in the skies, among the clouds and beyond.

Word Horde presents Fright Into Flight, the debut anthology from Amber Fallon (The Terminal, The Warblers), in which women take wing. In these stories connected by the unifying thread of flight, authors including Damien Angelica Walters, Christine Morgan, and Nadia Bulkin have spread their wings and created terrifying visions of real life angels, mystical journeys, and the demons that lurk inside us all. Whether you like your horror quiet and chilling or more in-your-face and terrifying, there's something here for every horror fan to enjoy.

You're in for a bumpy ride... So fasten your seatbelt, take note of the emergency exits, hold on to your airsick bag, and remember that this book may be used as a flotation device in the event of a crash landing.

I Did it for the Art by Izzy Lee

The Silk Angel by Christine Morgan

I am No Longer by Nancy Kilpatrick

Every Angel by Gemma Files

With the Beating of Their Wings by Martel Sardina

The Fallen by Pamela Jeffs

And When She Was Bad by Nadia Bulkin 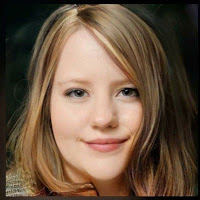 Amber Fallon lives in weird cave in a small town outside Boston, Massachusetts that she shares with her husband and their two dogs. A techie by day and a horror writer by night, Mrs. Fallon has also spent time as a bank manager, motivational speaker, produce wrangler, and apprentice butcher. Her obsessions with sushi, glittery nail polish, and sharp objects have made her a recognized figure around the community.

Amber's publications include The Terminal, The Warblers, TV Dinners from Hell, Daughters of Inanna, Nasty!, Dead Bait 4, Sharkasaurus, So Long and Thanks for All the Brains, Here Be Clowns, Horror on the Installment Plan, Zombies For a Cure, Quick Bites of Flesh, Mirror, Mirror, Operation Ice Bat, Painted Mayhem, and more!

For more information, visit her blog at www.amberfallon.net!
Posted by Qwill at 7:00 AM