In the sequel to the thrilling Dark Run, which Publishers Weekly called “a terrific debut,” Ichabod Drift and his crew sign on for a new smuggling job that soon goes south when they are separated and caught up in a dangerous civil war.

When Ichabod Drift and the Keiko crew sign on for a new smuggling job to a mining planet, they don’t realize what they are up against. The miners, badly treated for years by the corporation, are staging a rebellion. Split into two groups, one with the authorities and one with the rebels, Drift and his crew support their respective sides in the conflict. But when they are cut off from each other due to a communication blackout, both halves of the crew don’t realize that they have begun fighting themselves… 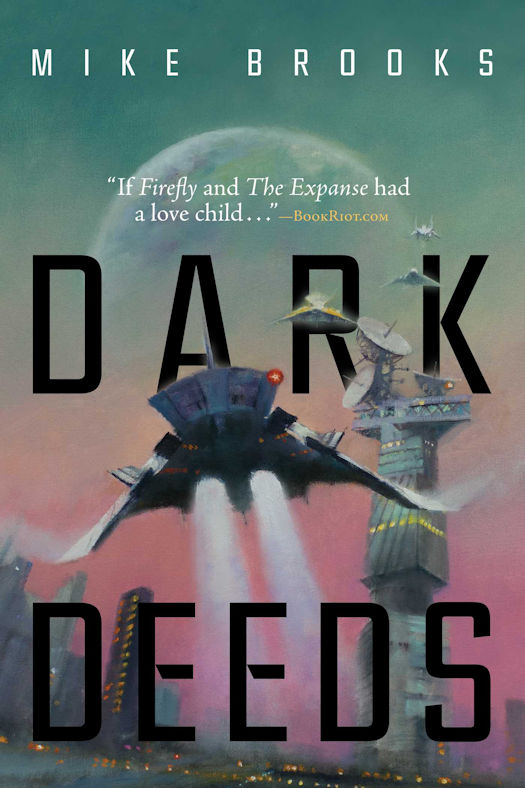 In the third book of the “entertaining” (Kirkus Reveiws) Keiko series, Captain Ichabod Drift and his crew find themselves in another mess as a ship-wide vacation leads to their second-in-command taken hostage by the planet’s criminal mastermind.

After the riotous civil war in Dark Sky, the crew of the Keiko decides to go on vacation at an illegal gambling port for a little fun. What they don’t realize is that the casinos are run by an ex-client who didn’t get his shipment due to the war. The mob boss decides to take Tamara Rourke, the Keiko’s second-in-command, and hold her hostage until the crew raises enough money to pay him back for the lost shipment. If they don’t pay up in time, Rourke will be killed.

Captain Ichabod Drift and his crew agree. But as they find a way to get the funds, one will betray everyone and one will die…

It’s impossible for a layman not to compare Mike Brooks’s Keiko series to the much beloved Firefly series by Joss Whedon. It’s a space western. For those of us who are more familiar with this type of subgenre within Science Fiction, we don’t immediately start comparing the two, but if you’re a fan of one there’s a very good chance you’ll really enjoy the other.

I received both Dark Sky and Dark Deeds together so it only makes sense in my mind to review them together. Personally, I never enjoy jumping into a series with book 2, but as a reviewer I find it useful as it immediately shows how much care the author takes to put the reader at ease if they haven’t read book 1. Brooks does a wonderful job of introducing the reader to his characters right from the start. Captain Ichabod Drift and Second-in-command Tamara Rourke have an immediate connection that draws you in, as well as the rest of the crew on the ship Keiko: Apirana Wahawaha, Jia and Kuai Chang, and Jenna McIlroy. Brooks does an awesome job of making sure the Keiko has enough diversity that it keeps everyone from merging into cutouts.

Captain Drift used to be a pirate, but has now moved on to being a smuggler. It was while being hired for a job that they find themselves on a planet on the brink of civil war in Dark Sky. I really enjoyed the fact that instead of having Drift and his crew take on the big bad corporation, he actually finds a way for the crew to split up and unknowingly take both sides, which leads to some great conflict. In Dark Deeds, we see the crew being punished for failing to finish the job they were given in book 2 by Sergei Orlov. Tamara Rourke is held hostage until Drift and his crew pay their debt. One again things don’t go as planned.

The best parts of this series are Brooks’s worldbuilding and character development. The plot points weren’t as interesting to me as much as how the characters interacted and dealt with the struggles. They were far more engaging. This can be a very long lived series if Brooks wants it to be, just because he’s created a crew that is fun to spend time with.

The worst parts of this series is when Brooks gets lost in the stereotypical locations and villains. There were too many salons and fist fights for my liking. Just because it’s a Space Western doesn’t mean we have to spend all our time in saloons and brothels. It’s just been done too much. The villains were too predictable and frankly not as fun to spend time with as the crew.

Mike Brook’s Dark Sky and Dark Deeds are the type of Space Western you want to read and really get to know and love the crew. I truly hope Mike Brooks keeps the series going for years to come. There is Violence, some Language and Adult Situations. I would recommend it to older teens and adults. This series is perfect for those of you who enjoy a little YeeHaw! in their Sci-Fi.
Posted by Qwill at 6:05 AM