Interview with Sherri Cook Woosley, author of Walking Through Fire


Please welcome Sherri Cook Woosley to The Qwillery as part of the 2018 Debut Author Challenge Interviews. Walking Through Fire was published on September 4th by Talos Press. 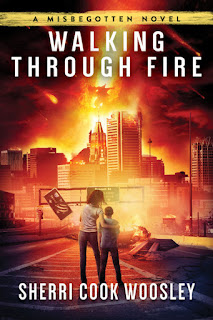 Sherri:  Thank you very much for having me!

I didn’t write it, but my first imaginings were fan fiction of the Elfquest graphic novels by Wendy and Richard Pini. I loved the world of two moons and how each member of the tribe had their own storyline. I remember going to Balticon and waiting with a comic book (still in wrapper, of course) to get Wendy’s signature. Mumbling about how I liked her drawings or something equally banal when I was really about to faint from excitement.

Sherri:  While writing Walking Through Fire I was more of a pantser because I had static images in my head. I arranged those in order, but then, in revision, I had to figure out WHY the dots connected in that order. It wasn’t a particularly efficient method, but sometimes being intuitive isn’t efficient. The trade-off is that you explore places and ideas that you might have missed otherwise.

Long Answer: I get my four kids off to three schools, walk the dog, teach morning yoga classes, and then have two hours before the older kids get home from school and the afternoon driving begins. That’s how I know I’m a writer. I would quit if I could! But, I can’t. I’ve tried. Instead, I have to schedule writing time and not wait for some muse to show up. Slow and Steady.

Sherri:  Most recently I had the opportunity to attend a two-week writing seminar called Taos Toolbox in New Mexico led by Walter Jon Williams and Nancy Kress. It was an intense time of critiquing and writing and meeting guest lecturers like Carrie Vaughn and this guy you might have heard of: George R. R. Martin. The two weeks were incredible. I’d never been away from my family that long, but I was so happy immersed in reading and writing and meeting the other writers participating in the seminar.

TQ:  Tell us something about Walking Through Fire that is not found in the book description.

Sherri:  The opening scene was originally a homestead near Harper’s Ferry, WV being attacked by a two-headed moose. My beta readers had so many questions that I had to keep backing up to explain how we’d gotten to that point.

TQ:  What inspired you to write Walking Through Fire? What appeals to you about writing Dystopian fantasy?

Sherri:  I think post-apocalyptic and dystopian fantasy are both influenced by a combination of fear and hope. At least, that’s how it is for me. I see trends in current society and I need to chase them down to the worst-case scenario. But, I firmly believe there are always heroes who run TOWARD the fire while everyone else is running away. That feels true to me and is something I want to explore.

TQ:  What sort of research did you do for Walking Through Fire?

Sherri:  I taught Intro. to World Mythology at University of Maryland years ago. I got to revisit the stories of Mesopotamia as I decided how to actualize each deity. One of the fun things about Mesopotamian myth is that there are so many variations in the stories, changes over time conflating with which city-state was in power, thus bringing their deity to power.

Then, for my magic system, I took the Sumerian concept of etemmu or etemu (Akkadian), which is the animating spirit and changed it to be the primal spiritual energy that gods can easily manipulate and humans have the ability, with work, to manipulate in individual ways.

TQ:  Please tell us about the cover for Walking Through Fire.

Sherri:  Jeff Chapman is the amazing artist who designed the cover from an early scene in the novel. Rachel and Adam are standing in a very recognizable part of Baltimore – an intersection I’ve driven a thousand times – and he even put a little hint in the flames that lick the sky.

TQ:  In Walking Through Fire who was the easiest character to write and why? The hardest and why?

Sherri:  An, the Sumerian sky god, was so much fun to write. He’s a fan of the Fab Four and sprinkles quotes from The Beatles into his conversations. As one of the oldest gods, he historically lost his power to the younger gods. So, he came into my novel with a chip already on his shoulder and a need to prove he’s still relevant even while he claims that he wants to stay out the upcoming war.

Rachel was the hardest. She’s not a “chosen one.” Instead, she’s a suburban mom with a degree in art history who is faced with an unimaginable unnatural disaster. Rachel experiences anxiety and doesn’t always know what to do, but she leads with her heart and she’s loyal to her found family. She worries too much – but what mother doesn’t? I hope that readers appreciate her vulnerability and don’t see it as weakness. Ha ha, maybe that’s my anxiety speaking.

TQ:  Does Walking Through Fire touch on any social issues?

Sherri:  I wanted to read about a mother, not a superhero. I wanted to read about someone who doesn’t already have a network of friends and, instead, has to find her tribe. Before N. K. Jemison’s Broken Earth series I hadn’t seen moms that I could relate to in speculative fiction. They were killed off to give the husband or the children a revenge motivation to start a quest. They were the authority figure who had to be defied for the other characters to have agency. They were the ones left behind to guard hearth and home so the heroes could leave. And mothers who did have agency, like Evelyn in the Divergent series, is the antagonist so that the characters can have moral agency.

This is a social issue because of today’s demand for mothers to sacrifice themselves, their art, their own desires, and sometimes their own bodies for their children. #MothersArePeopleToo. That can be our hashtag. Talking to fellow moms during play groups, we want to have our own books. Where we can love our children and still get to go on adventures without being judged. It feels like today’s culture is incredibly demanding and judgmental. A mother is judged if she goes to work, she’s judged if she stays home. She’s called a helicopter parent or a free-range parent. She’s supposed to read about Tiger moms and French moms and EVERY kind of parenting, except, maybe, there are a lot of different ways to parent your kids, with kindness and human decency being top of the list.

TQ:  Which question about Walking Through Fire do you wish someone would ask? Ask it and answer it!

Sherri:  What is your favorite animal from the novel? Answer: My favorite animal is actually in the second novel, which might be a tease, but if you’d like to find YOUR Misbegotten pet, I wrote a fun quiz: https://tasteofsherri.wordpress.com/2018/08/14/critter-quiz-for-walking-through-fire/

TQ:  Give us one or two of your favorite non-spoilery quotes from Walking Through Fire.

“Behind him she saw the sky rip open. A flaming meteor fell and an orange glow lit the horizon. The world was on fire.”

Sherri:  I’ll be signing books and speaking on two panels at the Baltimore Book Festival September 29-30th and I’ll be reading an excerpt of Walking Through Fire at Charm City Spec’s meeting at Bird in Hand bookstore in Baltimore on Halloween (October 31st).

Sherri:  Thank you for having me! 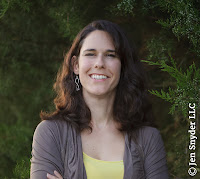 Sherri Cook Woosley, a Baltimore native, is an active member of the Baltimore Science Fiction Circle, and was a winner of their amateur writing contest in 2014. Her short stories can be found in Abyss & Apex, Pantheon Magazine, and Flash Fiction Magazine. Walking Through Fire is her debut novel. In addition to writing, she teaches yoga so other people can balance their lives while she juggles four kids, a dog, rabbit, and various other animals. She lives in Maryland with her family.