Over $100K Where We Live Anthology Proceeds Given to Route91Strong

PORTLAND, OR, 09/20/2018 — Image Comics is pleased to announce that local New York Times bestselling artist J.H. Williams, will grant the proceeds raised by the WHERE WE LIVE anthology book published by Image Comics this Friday, September 21 at 12 PM to Lisa Fine Survivor, Co-Founder & President of the non-profit, Route91Strong. The event will be held at Red Rock Resort & Spa, 11011 W Charleston Blvd, Las Vegas, NV 89135.

"When Jim first came to me about this project and his plans to support and give back to his community in Vegas, I knew Image had to do this,” said Eric Stephenson, Publisher at Image Comics. “I think people everywhere have been looking for ways to reach out to the survivors, and a year later, I am thrilled to sign off on a check for over $100,000 that we look forward to seeing go toward rebuilding lives that were ripped apart on that tragic day.”

Williams added: “Wendy and I are so thankful to Image Comics, and to everyone who donated their time and talents to this effort. And thank you to everyone who has purchased Where We Live, or will be soon. The book wouldn't have been possible without everyone's support and caring. You've all helped people.”

J.H. and Wendy Williams along with survivors Lisa Fine and Christina Caria will be joined by special guests and survivors of the Vegas Shooting that occurred a year ago on October 1st.

WHERE WE LIVE anthology (ISBN: 9781534308220) is available now and can be purchased at your local comic shop, Amazon, Barnes & Noble, Books-a-Million, IndieBound, and Indigo. 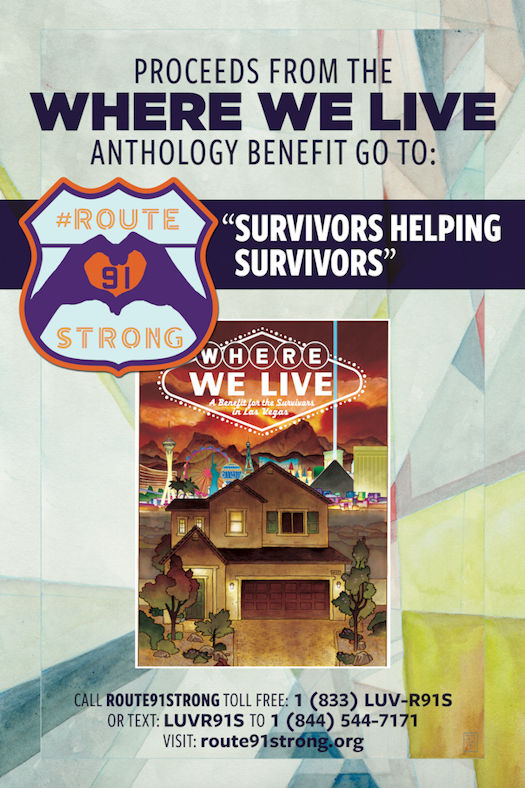 ABOUT WHERE WE LIVE ANTHOLOGY
“On October 1, 2017, Las Vegas, Nevada suffered the worst mass shooting in modern American history, resulting in 58 deaths and over 500 injured. It broke my heart. Las Vegas is my home. I felt like something needed to be done to help in a unique way.” — JH WILLIAMS III, Artist & Curating Editor

This “unique way” was the genesis of the WHERE WE LIVE anthology—a riveting collection of both fictional stories and actual eye-witness accounts told by an all-star line-up of the top talent working in comics today. All the creators have graciously volunteered their time and talent to help bring some sense to this senseless act and, in the process, raise money for the survivors and their families. The book will include a variety of perspectives with key themes exploring gun violence, common sense gun control, value of a compassionate society, mental health stigmatization, aftermath of tragedy and how individuals & communities persevere and an appreciation of Las Vegas as a vibrant community.

100% of the proceeds for the WHERE WE LIVE anthology will be donated to Route91Strong, a non-profit organization.


ABOUT ROUTE91STRONG NONPROFIT
Route91Strong is a 501(c)3 Tax-Exempt Non-Profit Public Benefit Corporation founded by Vegas shooting survivors Lisa Fine and Brian Claypool along with other gun violence survivors and trusted experts. These survivors have come together to advocate for the families involved in senseless and horrific acts of gun violence.
Route91Strong Non-profit raises funds to meet the immediate financial needs for the survivors of Oct 1. Their mission is to create a non-partisan, non-political, support group to help other survivors of gun violence tragedies come together for Support, Hope, Strength, Change, and Love. Many of Route91Strong’s applicants suffer with debilitating PTSD, sleepless nights, and nightmares; some are unable to work, unable to leave their homes, and unable to pay their bills; and some are losing their jobs, losing their homes, and tragically on suicide watch.


ABOUT RED ROCK CASINO RESORT & SPA
Red Rock Casino Resort & Spa is a top Las Vegas luxury resort located off the strip. Red Rock is honored to host this check-giving event with Route91Strong and the WHERE WE LIVE book that is donating over $100,000 to survivors through this non-profit. This especially touches all of our hearts and souls as in tribute and honor of the one-year mark of the tragic night of October 1.
Posted by Qwill at 6:00 AM

Labels: Image Comics, Where We Live
Email ThisBlogThis!Share to TwitterShare to FacebookShare to Pinterest