Review: The Bear and the Nightingale by Katherine Arden 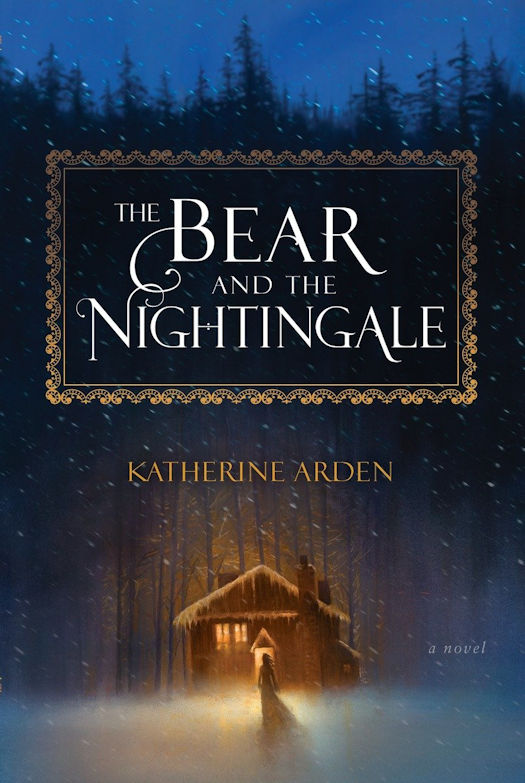 A magical debut novel for readers of Naomi Novik’s Uprooted, Erin Morgenstern’s The Night Circus, and Neil Gaiman’s myth-rich fantasies, The Bear and the Nightingale spins an irresistible spell as it announces the arrival of a singular talent with a gorgeous voice.

At the edge of the Russian wilderness, winter lasts most of the year and the snowdrifts grow taller than houses. But Vasilisa doesn’t mind—she spends the winter nights huddled around the embers of a fire with her beloved siblings, listening to her nurse’s fairy tales. Above all, she loves the chilling story of Frost, the blue-eyed winter demon, who appears in the frigid night to claim unwary souls. Wise Russians fear him, her nurse says, and honor the spirits of house and yard and forest that protect their homes from evil.

After Vasilisa’s mother dies, her father goes to Moscow and brings home a new wife. Fiercely devout, city-bred, Vasilisa’s new stepmother forbids her family from honoring the household spirits. The family acquiesces, but Vasilisa is frightened, sensing that more hinges upon their rituals than anyone knows.

And indeed, crops begin to fail, evil creatures of the forest creep nearer, and misfortune stalks the village. All the while, Vasilisa’s stepmother grows ever harsher in her determination to groom her rebellious stepdaughter for either marriage or confinement in a convent.

As danger circles, Vasilisa must defy even the people she loves and call on dangerous gifts she has long concealed—this, in order to protect her family from a threat that seems to have stepped from her nurse’s most frightening tales.

Set in the remote forest of Russia, Katherine Arden begins her amazing debut featuring Vasilisa who is very different from her parents and siblings. Vasilisa can see the spirits who live in her home, stables and the forest. The same spirits who frighten her step mother and cast her in the role of the village witch. When a young priest is sent to the village, determined to purge the 'old ways' everything takes a turn for the worst.  Crops start to fail, villagers and their animals die in horrible ways and the dead come back to life but its not the pious who will save them. Vasilisa, with the help of the frost demon, is the only one who can save her family home.

The Bear and the Nightingale is truly a fantastic book. It is one of those books that you can't believe is a debut and can't put down. To echo the book summary it really reminded me of Naomi Novak's Uprooted. Both books are steeped in Russian folklore with enigmatic female leads. Arden paints a rich and colourful picture of Vasilisa's lonely upbringing as the child that caused her beloved mother's death. When her stepmother turns up on the scene Vasilisa's life turns into an almost 'cinderella before the ball' existence. I enjoyed how Arden uses the plot to explain the spread of Christianity during that time period in Russia and how people turned away from worshiping the pagan gods and spirits. My one small criticism is that Arden spent a little too long describing Vasilisa's early life as I believe she could have a successfully progressed the plot without so much exposition in that period of her life.

If you are looking for a book that draws you in from page one and you can't put down then I urge you to read The Bear and the Nightingale. Hats off to Arden for crafting an richly textured story in a wonderfully lush and equally stark setting. This story hearkens back to a traditional fairy tale and is so detailed you can almost feel the chill of every snowflake that falls on Vasilisa's shoulders. A joy to read, start to finish.