Interview with April Daniels and Review of Dreadnought


Please welcome April Daniels to The Qwillery as part of the 2017 Debut Author Challenge interviews! Dreadnought was published on January 24th by Diversion Books. 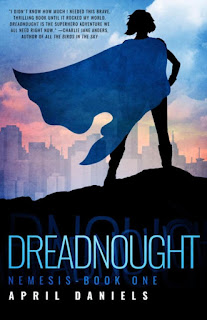 April:  Hi! Happy to be here. I started writing fanfic in high school and it sort of blossomed from there.

April:  Oh Goddess, this is a tricky one. I’ve done both, but I’m not sure I’d say I’m a hybrid. It sort of depends on the project. When I plot ahead of time, my writing is more propulsive and tighter, but when I pants I think I end up with some more creative decisions than I would make otherwise.

April:  Right now? Just getting the damn words down. It’s very common for an author to get seriously blocked after signing her first contract, and that has happened to me. I’ve been blocked for more than a year and I can’t wait for Dreadnought to get published so I can move past this.

April:  I have always had a very hard time answering these sort of questions because everything I read and see goes into the stew. It bubbles away for months or years, and then when I sit down to write, it comes out in the writing. I don’t sit down to write with an influence in mind, I just write how it makes sense for the story to work.

April:  Trans girl superhero gets cool clothes and then beats up robots to save the world.

TQ:  Tell us something about Dreadnought that is not found in the book description.

TQ:  What inspired you to write Dreadnought? What appeals to you about writing about a superhero?

TQ:  What sort of research did you do for Dreadnought?

April:  None whatsoever. Wait, no, that’s not true. I looked up what kind of nuclear reactors were on theoretical drawing boards.

April:  It was made by a staff artist at Diversion books. If you look carefully it’s got the colors of the trans flag represented on the skyline.

TQ:  In Dreadnought who was the easiest character to write and why? The hardest and why?

April:  Calamity, hands down, was the easiest to write. This is mainly because she was the most fun to write.

The hardest to write was Graywytch. She went through three or four revisions. Initially she spoke almost entirely in real-life TERF quotes, but that came off as cartoonish—nobody would believe anyone was really that evil! I had to tone her down again and again until I got the balance right.

April:  When you write about a transgender protagonist, you are forced to write about social issues no matter what. People will make it political, even if you don’t want it to be. So I leaned into that. The first draft was a little preachy, and I toned it down. I think it’s got a good balance now.

TQ:  Which question about Dreadnought do you wish someone would ask? Ask it and answer it!

Q: Can we give you a giant pile of money to adapt this into a feature length film?

TQ:  Give us one or two of your favorite non-spoilery quotes from Dreadnought.

April:  There’s an entire chapter that I refer to as Post Structuralism For Kidz, but I think that would be too long to quote here. I guess I’ll quote the section that made me fall in love with writing Calamity’s dialog. In this scene she’s just found a newly-transformed Danielle over Dreadnought’s dead body in the aftermath of a fiery explosion.

Calamity is silent for a long time. “Well, Danny.” She reaches up and taps a curly wire leading to an earbud taped into her ear. “The cops say they’ll be here in a few moments, so we’d best be leaving.”
“Why?”
“If the police find you here, they’ll want you to testify against a supervillain.” Calamity shrugs. “I’ll not claim expertise on how things work from where you’re from, but in my experience of the world, that is a poor choice of behavior. Might be you decide to keep your mouth shut. Might be Utopia doesn’t take the chance. Best be leaving.”
When she puts it that way, I’m throwing all my crap into my bag and running next to her as she sprints for the parking garage’s rear.

April:  The sequel to Dreadnought is called Sovereign and I’m currently doing revisions for it. Right now we’ve scheduled it to come out in July.

April:  Thanks for having me! 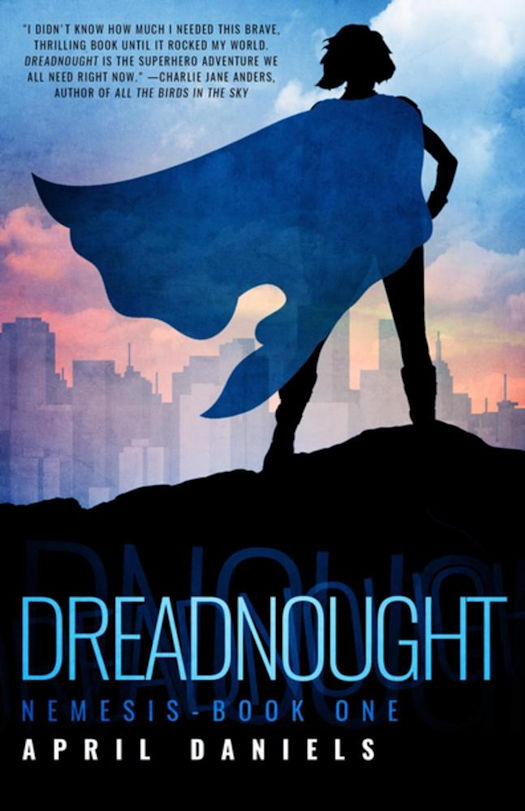 An action-packed series-starter perfect for fans of The Heroine Complex and Not Your Sidekick.

Danny Tozer has a problem: she just inherited the powers of Dreadnought, the world’s greatest superhero. Until Dreadnought fell out of the sky and died right in front of her, Danny was trying to keep people from finding out she’s transgender. But before he expired, Dreadnought passed his mantle to her, and those secondhand superpowers transformed Danny’s body into what she’s always thought it should be. Now there’s no hiding that she’s a girl.

It should be the happiest time of her life, but Danny’s first weeks finally living in a body that fits her are more difficult and complicated than she could have imagined. Between her father’s dangerous obsession with “curing” her girlhood, her best friend suddenly acting like he’s entitled to date her, and her fellow superheroes arguing over her place in their ranks, Danny feels like she’s in over her head.

She doesn’t have time to adjust. Dreadnought’s murderer—a cyborg named Utopia—still haunts the streets of New Port City, threatening destruction. If Danny can’t sort through the confusion of coming out, master her powers, and stop Utopia in time, humanity faces extinction.

Dreadnought, New Port City's most powerful superhero, has been mortally wounded during an unexpected battle with another metahuman. He lands near Daniel Tozer, a fifteen year old high school student, in a secluded area in back of the mall. Despite the danger, Danny attempts to help by dragging him to safety. The dying superhero urges Danny to flee but the teen refuses. As Dreadnought feels his life force extinguishing, he bestows his powers on Danny. The results are unexpected. Dreadnought's powers are transferred but somehow they transform the teen from Daniel to Danielle. Danny, a trans woman, has always felt trapped in her own skin, so although she is saddened by Dreadnought's passing, she can't help but rejoice at the gift that he's given her. But there is the issue of her new superpowers. Danny wants to find a way to repay the superhero for all that he has done for her. Should she accept the mantle of Dreadnought with the responsibilities and sacrifices that come with it? And how on earth will she explain all this to her parents?

Dreadnought is a YA with definite adult crossover appeal. The story is told through a first person narrative, and although I had some trouble getting accustomed to Danny's adolescent voice, by the third chapter I was hooked. Author April Daniels has written an inspiring tale that blends the perils involved in learning to use brand new superpowers with the emotional journey of a transgender teen.

This story is special because Danny is a superhero with whom readers can empathize. She has lived her young life in fear: fear of her verbally abusive father, fear of being thought of as a freak, fear of not being strong, or brave, or smart enough, and fear of never being allowed to be herself. The joy she feels about her physical transformation is short-lived as the negative reaction of her parents, friends, and doctor rings with a brutal truthfulness that is painful to witness. Yet, happily, Danny perseveres and her strength of character allows readers to see her as a fully realized human.

There is a second part to the story that is equally engaging. Dreadnought is also about a teen's decision to embrace or reject the obligations and consequences of becoming a superhero. Danny's first venture into flexing her super muscles to help people really stands out. Her attempt at rescuing a commercial airliner on the verge of crashing is particularly exhilarating. Another highlight for me is Danny's friendship with Calamity and the dangers that their youthful exuberance land them in. Calamity's acceptance and support are a welcome departure from the many narrow-minded characters that populate Danny's world.

Dreadnought is an ambitious book that balances terrific metahuman battles with a myriad of topics including domestic abuse, bullying, government corruption, racism, sexism, and intolerance. April Daniels has written a insightful novel that is thoughtful without being preachy. Due to the complex, and often stressful, emotional conflicts, I would recommend this book to ages 13 and up. I think Danny's story can serve as a stepping stone to great discussions and conversations. In my opinion, Danny's heart-wrenchingly bittersweet attempt to make the people she cares about understand and accept that she is a transgender lesbian is written beautifully and needs to be shared. In the end, Dreadnought had me cheering while bringing tears to my eyes. Absolutely brilliant. 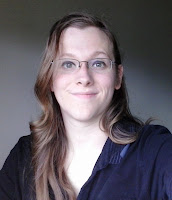 April Daniels graduated from UC Santa Cruz with a degree in literature. She completed her first manuscript by scribbling a few sentences at a time between calls while working in the customer support department for a well-known video game console.

She has a number of hobbies, most of which are boring and predictable. As nostalgia for the 1990s comes into its full bloom, she has become ever more convinced that she was born two or three years too late and missed all the good stuff the first time around.