THE PURLOINING OF PRINCE OLEOMARGARINE, an eleven-chapter, 152-page illustrated storybook for all ages, will be published on September 26, 2017, with a first printing of 250,000 copies.

The basis of this new work is sixteen pages of Twain’s handwritten notes after telling his young daughters a fairy tale one night in 1879 while the family was staying in Paris, an event he documented in his journal. In 2011, a visiting scholar at the Mark Twain Papers & Project at the University of California at Berkeley spotted the notes in the archives while conducting his own research and recognized their significance. Although Twain told his young daughters countless bedtime stories, made up on the spot as they requested them, these notes are believed to be the only ones he ever jotted down from those sessions.

“Dr. John Bird, noted Twain scholar and author of Mark Twain and Metaphor, brought the text to our attention,” explained Cindy Lovell, executive director at the Mark Twain House & Museum. “He’d been researching another project when he came across this partial story written by Twain for his daughters. We are thrilled to have the Steads joining us to further bring this treasure to life.”

“To publish a new Twain story is an incredible literary event,” says Gilbert. “When I first got the chance to read this unpublished Twain story, I couldn’t believe what I was holding. I’ve admired Erin and Philip Stead’s work since their first book and couldn’t think of a more ideal match for this project. It’s an American dream team.”

THE PURLOINING OF PRINCE OLEOMARGARINE follows a young boy who eats the flower sprouted by a magical seed and gains the ability to talk to animals. From there, the boy and his new animal friends go off on a wild adventure to rescue a kidnapped prince. Though the story was left in fragments and never completed by Twain, it bears many of the hallmarks of his beloved style, in the humor and playfulness and in the quest of a young boy off on his own navigating the adult world.

Philip and Erin Stead, two of today’s most notable names in children’s literature, have completed the text and illustrated the book, framing the narrative as a story “told to me by my friend, Mr. Mark Twain,” and even including occasional interruptions by an imagined meeting over tea between Philip and Twain.

Said Erin of taking on the project, “As an illustrator, not a writer, I can often use the excuse that I can’t find the right words to describe how I am feeling (stunned and honored being the closest and most generic). Luckily I can now turn to Twain, who is quite quotable, to provide a little context and inspiration: ‘I’m not the declining sort. I would take charge of the constellations if I were asked to do it. All you need in this life is ignorance and confidence: then success is sure.’”

Added Philip: “Of course any person in their right mind would be terrified of this project. But having the support of the Twain house allayed some fears…and then I had a good long walk-and-talk with my dog about it, and she assured me I had her full support, and that I was the right man for the job—provided it did not cut into our twice-daily ambles through the neighborhood, mealtimes, or the hours set aside each day for lying on our backs with our bellies in the air.”

Exploring themes of charity, kindness, and bravery in the face of tyranny, with sharply drawn satire and tear-inducing pathos, this extraordinary combination of talent both classic and contemporary reaches its full potential as an old-fashioned—yet thoroughly modern—fully illustrated storybook that readers of every age will treasure. A monumental event not only in the world of children’s literature, but for literature overall, the publication of THE PURLOINING OF PRINCE OLEOMARGARINE will take place during the 150th anniversary of Mark Twain’s very first book, a collection of twenty-seven previously published stories titled The Celebrated Jumping Frog of Calaveras County, and Other Sketches.

ERIN STEAD is the Caldecott Medal–winning illustrator of A Sick Day for Amos McGee, also named a New York Times Best Illustrated Book of the Year and a Publishers Weekly Best Children’s Book of the Year (A Neal Porter Book, Roaring Brook Press, 2010). She and her husband, author and artist Philip Stead, with whom she co-created A Sick Day for Amos McGee, Bear Has a Story to Tell, and Lenny & Lucy, live in northern Michigan. Erin also illustrated And Then It’s Spring, written by Julie Fogliano and named a Boston Globe–Horn Book Honor Book and a Best Children’s Book of the Year by Kirkus Reviews and Publishers Weekly. Her 2016 book The Uncorker of Ocean Bottles, written by Michelle Cuevas, was named a best book of the year by Time, People, the Boston Globe, and School Library Journal.

PHILIP C. STEAD is the author of the Caldecott Medal–winning book A Sick Day for Amos McGee, also named a New York Times Best Illustrated Book of the Year and a Publishers Weekly Best Children’s Book of the Year, illustrated by his wife, Erin Stead. Together with Erin, he also created Bear Has a Story to Tell, an E. B. White Read-Aloud Award honor book. Philip, also an artist, has written and illustrated several of his own books, including Samson in the Snow; Hello, My Name Is Ruby; and A Home for Bird. Philip and Erin live in northern Michigan.

Both the Mark Twain House & Museum in Hartford, Connecticut, and the Mark Twain Papers & Project at the University of California at Berkeley work to foster an appreciation of Mark Twain as one of our nation’s defining cultural figures and to demonstrate the continuing relevance of his work, life, and times.

The Mark Twain House & Museum has restored the author’s Hartford, Connecticut, home, where the family lived from 1874 to 1891.Twain wrote his most important works, including Adventures of Huckleberry Finn, The Adventures of Tom Sawyer, and A Connecticut Yankee in King Arthur’s Court, during the years he lived there. In addition to offering tours of Twain’s restored home, a National Historic Landmark, the institution provides activities and educational programs that illuminate Twain’s literary legacy and share information about his life and times.

The house and museum at 351 Farmington Avenue are open daily from 9:30 a.m. to 5:30 p.m. For more information, call 860-247-0998, or visit marktwainhouse.org. Programs at the Mark Twain House & Museum are made possible in part by support from the Connecticut Department of Economic and Community Development and the Greater Hartford Arts Council’s United Arts Campaign.

The Mark Twain Papers in the Bancroft Library, University of California at Berkeley, is curated by Robert H. Hirst, who is also general editor of The Mark Twain Project, which is the comprehensive scholarly edition being produced at the archive. The Papers are Mark Twain’s private archive, which came to UC Berkeley in 1949 and became a permanent part of the library in 1962 (when Twain’s last surviving daughter, Clara, died). The Project was started in Iowa City, IA, and Berkeley, CA, before becoming a single project in 1980, editing everything of significance written by Mark Twain. It has been supported for half a century by the National Endowment for the Humanities. Learn more at lib.berkeley.edu/libraries/bancroft-library/mark-twain-papers.

Learn more about the book at http://rhcbooks.com/books/248945/the-purloining-of-prince-oleomargarine-by-mark-twain-philip-c-stead 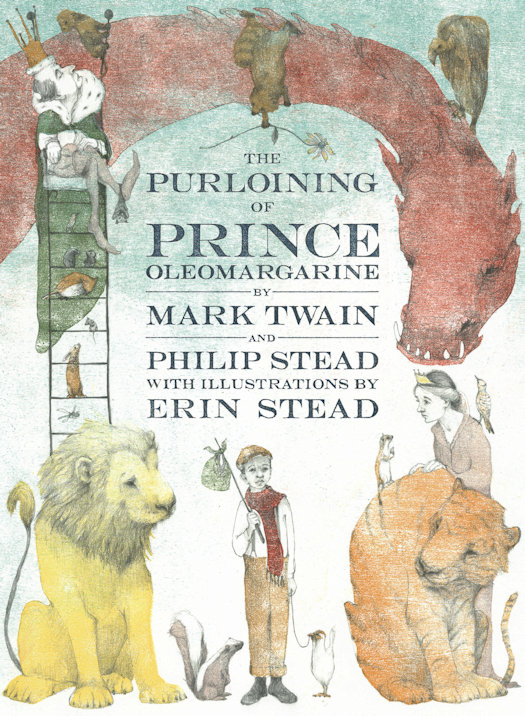 In a hotel in Paris one evening in 1879, Mark Twain sat with his young daughters, who begged their father for a story. After the girls chose a picture from a magazine to get started, Twain began telling them the tale of Johnny, a poor boy in possession of some magical seeds. Later, Twain would jot down some rough notes about the story, but the tale was left unfinished… until now.

Plucked from the Mark Twain archive at the University of California at Berkeley, Twain’s notes now form the foundation of a fairy tale picked up over a century later. With only Twain’s fragmentary script and a story that stops partway as his guide, author Philip Stead has written a tale that imagines what might have been if Twain had fully realized this work:

Johnny, forlorn and alone except for his pet chicken, meets a kind woman who gives him seeds that change his fortune, allowing him to speak with animals and sending him on a quest to rescue a stolen prince. In the face of a bullying tyrant king, Johnny and his animal friends come to understand that generosity, empathy, and quiet courage are gifts more precious in this world than power and gold.

Illuminated by Erin Stead’s graceful, humorous, and achingly poignant artwork, this is a story that reaches through time and brings us a new book from America’s most legendary writer, envisioned by two of today’s most important names in children’s literature.

Amazon : Barnes and Noble : Book Depository : Penguin RandomHouse
Posted by Qwill at 7:43 AM