Please welcome Elle Katharine White to The Qwillery as part of the 2017 Debut Author Challenge Interviews. Heartstone is published on January 17th by Harper Voyager. Please join The Qwillery in wishing Elle a Happy Publication Day! 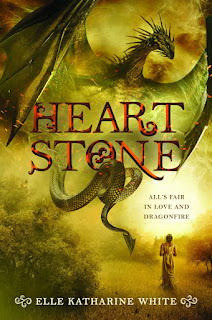 EKW:  Glad to be here! When I was in middle and high school I had terrible insomnia. Since staring at a dark ceiling gets old after the first hour, I began to make up stories to keep myself occupied. Pretty soon my stories got so big and complicated I couldn’t keep them in my head anymore, so I started to write them down. Bedtime stories turned to short stories, short stories into novels. I haven’t struggled with insomnia since.

EKW:  Hybrid. I write like Dug in the movie Up; I’ll start as a plotter with a scene-by-scene outline, but as I get into it I’ll—SQUIRREL!—find new story threads within the larger plot that insist on pulling me through to the end. Sometimes those adventures make it to the finished work, sometimes not.

EKW:  Finding time to write while working a full time job. It kind of makes me miss the insomnia. If I could have any one superpower, it would be the ability to function on one hour of sleep a night. I’d get so much done!

EKW:  My mom read to my brother and me every night when we were growing up—everything from the Hardy Boys to The Chronicles of Narnia. That was my first introduction to fantasy literature and I found I couldn’t get enough of it. My favorite books were anthologies of myths and legends from around the world. Reading those made me want to enter those beautiful, dangerous, magical worlds, first just as a reader, but eventually as a storyteller myself, making myths of my own.

EKW:  Epic fantasy reimagining of Pride & Prejudice with a dragon-riding, monster-hunting Mr. Darcy and an Elizabeth too nosy for her own good.

TQ:  Tell us something about Heartstone that is not found in the book description.

EKW:  A bit of book mythology: A heartstone is the last drop of blood drawn from the heart of a living creature. It takes the form of a gem, usually about the size of a cherry or peach pit, and varies in color depending on the creature.

TQ:  What inspired you to write Heartstone? What appealed to you about using Pride and Prejudice as the foundation for Heartstone?

EKW:  Pride and Prejudice is one of my favorite books and I’ve loved fantasy since I was a kid, so somewhere in the back of my mind there’s always been the seed of the idea to combine the two, but it only sprouted after my housemate put on the movie How to Train Your Dragon while I was rereading P&P. I remember the exact scene when inspiration struck: as Hiccup is making his equipment, I had the sudden image of Mr. Darcy riding a dragon and my inner fangirl just about died of happiness. I couldn’t sleep until I’d outlined a world where that could happen.

TQ:  In your opinion, why do Austen's works lend themselves so well to retellings?

EKW:  Austen understood people. Regency England might’ve been her stage, but her characters transcend time. The young woman struggling to survive and stay true to herself in a society that does not default in her favor—the privileged man learning what it means to engage humbly with people outside his social sphere—the mother fighting for the wellbeing of her family regardless of what it costs her reputation . . . we’ve all met Lizzies and Darcys and Mrs. Bennets. And because we recognize them, because they are anchors to the world we understand, we love meeting these characters in new settings, whether it’s in an English parlor or New York City boardroom or a zombie-infested Hertfordshire or a fantasy kingdom inhabited by dragons and monsters.

TQ:  What sort of research did you do for Heartstone?

EKW:  I had to look up a fair bit about medieval armor and weaponry, which began with binge-watching YouTube videos on the correct way to hold a dagger, and ended in borrowing a friend’s longsword for a few months. The latter may or may not have resulted in some irresponsible wielding in close quarters and the disemboweling of a couch cushion. Maybe.

EKW:  Larry Rostant and Lex Maudlin did a fantastic job on the cover. They captured the colors, the ferocity, the scenery, everything. While it’s not a direct scene from the book, it’s almost exactly how I pictured Akarra and Aliza.

TQ:  In Heartstone, who was the easiest character to write and why? The hardest and why?

EKW:  Tobble the lovable, mischievous hobgoblin is one of my favorite characters, probably because he was so easy to write. He’s a combination of every small child I’ve ever babysat plus all the getting-out-of-trouble skills I learned as the youngest sibling. Charis Brysney, my reimagined Caroline Bingley, was the hardest. I never liked Caroline in P&P, and that made translating the spirit of her character a challenge. Finding a balance for Charis between harsh, haughty, and endearing was the most difficult part.

TQ:  Which question about Heartstone do you wish someone would ask? Ask it and answer it!

Q:  Did you come up with the name Burrumburrem by imagining the sound a snoring cat would make if it took a nap on a kettle drum?

TQ:  Give us one or two of your favorite non-spoilery quotes from Heartstone.

Aliza: “Give me earth and growing things; you can keep the wind.”

Aliza, as she wonders why Daired keeps staring at her: “You have a dragon, and she’s dancing. Get your priorities sorted.”

EKW:  Thanks for having me!

A debut historical fantasy that recasts Jane Austen’s beloved Pride & Prejudice in an imaginative world of wyverns, dragons, and the warriors who fight alongside them against the monsters that threaten the kingdom: gryphons, direwolves, lamias, banshees, and lindworms.

They say a Rider in possession of a good blade must be in want of a monster to slay—and Merybourne Manor has plenty of monsters.

Passionate, headstrong Aliza Bentaine knows this all too well; she’s already lost one sister to the invading gryphons. So when Lord Merybourne hires a band of Riders to hunt down the horde, Aliza is relieved her home will soon be safe again.

Her relief is short-lived. With the arrival of the haughty and handsome dragonrider, Alastair Daired, Aliza expects a battle; what she doesn’t expect is a romantic clash of wills, pitting words and wit against the pride of an ancient house. Nor does she anticipate the mystery that follows them from Merybourne Manor, its roots running deep as the foundations of the kingdom itself, where something old and dreadful slumbers . . . something far more sinister than gryphons.

It’s a war Aliza is ill-prepared to wage, on a battlefield she’s never known before: one spanning kingdoms, class lines, and the curious nature of her own heart.

Elle Katharine White infuses elements of Austen’s beloved novel with her own brand of magic, crafting a modern epic fantasy that conjures a familiar yet wondrously unique new world.

Elle was born and raised in Buffalo, NY, where she learned valuable life skills like how to clear a snowy driveway in under twenty minutes (a lot easier than you think) and how to cheer for the perennial underdog (a lot harder than you think).

When she's not writing she spends her time reading, drinking absurd amounts of tea, having strong feelings about fictional characters, and doing her best to live with no regrets.

Connect with her on Facebook at @ellewhite.author, or witness the hilarious spectacle that is a writer contending with the 140-character limit on Twitter at @elle_k_writes.