SEATTLE--(BUSINESS WIRE)--Jan. 19, 2017-- (NASDAQ: AMZN)—Amazon Studios today announced it has greenlit Good Omens, an hour-long limited comedy series based on Neil Gaiman’s (American Gods) and Terry Pratchett’s (Colour of Magic) acclaimed novel of the same name. Set to debut in 2018 on Prime Video, Good Omens is a six-part series that has been entirely written by Gaiman, who will also serve as Showrunner. BBC Studios is co-producing the series with Narrativia and The Blank Corporation and in association with BBC Worldwide for Amazon Prime Video and the BBC.

Good Omens takes place in 2018 when the Apocalypse is near and Final Judgment is set to descend upon humanity. According to The Nice and Accurate Prophecies of Agnes Nutter Witch (the world’s only completely accurate book of prophecies), the world will end on a Saturday. Next Saturday, in fact. Just before dinner.

So the armies of Good and Evil are amassing, Atlantis is rising, and tempers are flaring. Everything appears to be going according to Divine Plan. Except Aziraphale, a somewhat fussy angel, and Crowley, a fast-living demon—both of whom have lived amongst Earth’s mortals since The Beginning and have grown rather fond of the lifestyle—are not actually looking forward to the coming war. And…someone seems to have misplaced the Antichrist.

“Spanning not only the universe but also the entirety of time, Neil Gaiman has created a story that may be the largest ever told on television,” said Joe Lewis, Head of Comedy and Drama, Amazon Studios. “We’re excited to be working with BBC Studios to bring Neil’s and Terry Pratchett’s incredible book to life and to Prime members everywhere.”

Neil Gaiman, writer, said: “Almost thirty years ago, Terry Pratchett and I wrote the funniest novel we could about the end of the world, populated with angels and demons, not to mention an eleven-year-old Antichrist, witchfinders and the four horsepeople of the Apocalypse. It became many people’s favourite book. Three decades later, it’s going to make it to the screen. I can’t think of anyone we’d rather make it with than BBC Studios, and I just wish Sir Terry were alive to see it.”

Chris Sussman, Head of Comedy, BBC Studios, said: “Good Omens has always been one of my favourite books, and it’s hugely exciting not just to be able to bring it to life, but to do so with scripts from Neil Gaiman himself. It feels like a good time to be making a comedy about an impending global apocalypse.”

Executive Producers of the series are Neil Gaiman, Caroline Skinner (Doctor Who), and Chris Sussman (Fleabag) for BBC Studios, Rob Wilkins (Choosing to Die) and Rod Brown (Going Postal) for Narrativia. Gaiman will adapt the novel for the screen.

Amazon Video is a premium on-demand entertainment service that offers customers the greatest choice in what to watch, and how to watch it. Amazon Video is the only service that provides all of the following:
In addition to Prime Video, the Prime membership includes unlimited fast free shipping options across all categories available on Amazon, more than two million songs and thousands of playlists and stations with Prime Music, secure photo storage with Prime Photos, unlimited reading with Prime Reading, unlimited access to a digital audiobook catalogue with Audible Channels for Prime, a rotating selection of free digital games and in-game loot with Twitch Prime, early access to select Lightning Deals, exclusive access and discounts to select items, and more. To sign-up for Prime or to find out more visit: www.amazon.com/prime.

Neil Gaiman is the award-winning author of books, graphic novels, short stories, and films for all ages, including the Oscar-nominated Coraline. Some of his most notable titles include the groundbreaking Sandman comics series, The Graveyard Book (the only book ever to win both the Newbery and Carnegie medals), and The Ocean at the End of the Lane, the UK’s National Book Award 2013 Book of the Year. The film adaptation of his short story How to Talk to Girls at Parties and the television adaptation of his novel American Gods will be released in 2017. Born in the UK, he now lives in the United States.

Terry Pratchett was the acclaimed creator of the global bestselling Discworld series, the first of which—The Colour of Magic—was published in 1983. As a young journalist, Neil Gaiman was the first person ever to interview him. Terry’s books have been widely adapted for stage and screen, and he was the winner of multiple prizes, including the Carnegie Medal, as well as being awarded a knighthood for literature. He died in March 2015.

BBC Studios is the BBC’s main TV production arm, producing bold, British, creative content for audiences in the UK and around the world, across drama, comedy, entertainment, music, events and factual, as well as radio and digital output. From Strictly Come Dancing, Planet Earth II and Doctor Who, to War and Peace, Top Gear and David Bowie: The Last Five Years, their programmes are renowned for their quality and loved by viewers. With bases across the nations and regions of the UK, BBC Studios reflects and represents diverse voices and creative talent from all around the country. BBC Studios is set to launch as a wholly-owned subsidiary in 2017.

Narrativia is an independent production company, launched in 2012 by Sir Terry Pratchett. The company owns and controls the exclusive multimedia and merchandising rights to all of Sir Terry’s works, including his Discworld characters and creations. With more than 85 million books sold worldwide, Pratchett’s writing has created a literary phenomenon across the globe and Narrativia protects and unites the management and development of this brand. The Executive Team, headed by Managing Director and BAFTA winning producer Rod Brown, is based in London, where he works closely with co-directors, celebrated writer Rhianna Pratchett and Terry Pratchett’s Business Manager, Rob Wilkins, who all jointly own and control Narrativia. www.Narrativia.com

BBC Worldwide will distribute first-run rights to Good Omens in territories where there is no Prime Video and second-run rights internationally.

BBC Worldwide is the main commercial arm and a wholly-owned subsidiary of the British Broadcasting Corporation (BBC). Its vision is to build the BBC’s brands, audiences, commercial returns and reputation across the world. This is achieved through investing in, commercialising and showcasing content from the BBC around the world, in a way that is consistent with BBC standards and values. The business also champions British creativity globally.


If you'd like to read the novel (though I suspect there will be a tie-in edition for the Amazon series): 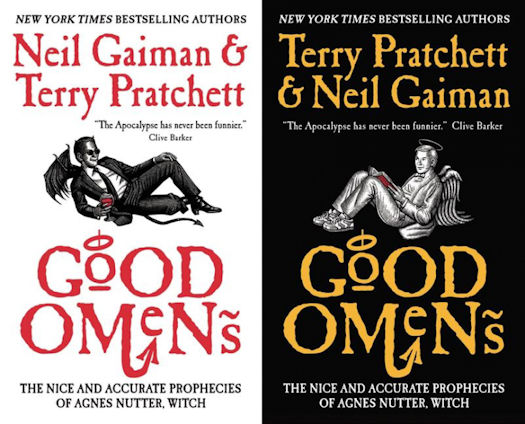 According to The Nice and Accurate Prophecies of Agnes Nutter, Witch (the world's only completely accurate book of prophecies, written in 1655, before she exploded), the world will end on a Saturday. Next Saturday, in fact. Just before dinner.

So the armies of Good and Evil are amassing, Atlantis is rising, frogs are falling, tempers are flaring. Everything appears to be going according to Divine Plan. Except a somewhat fussy angel and a fast-living demon—both of whom have lived amongst Earth's mortals since The Beginning and have grown rather fond of the lifestyle—are not actually looking forward to the coming Rapture.

And someone seems to have misplaced the Antichrist . . .