Guest Blog by Rjurik Davidson - On Creating Wonderful Worlds - May 24, 2014


Please welcome Rjurik Davidson to The Qwillery as part of the 2014 Debut Author Challenge Guest Blogs. Unwrapped Sky was published on April 15, 2014 by Tor. You may read the 2014 DAC interview with Rjurik here. 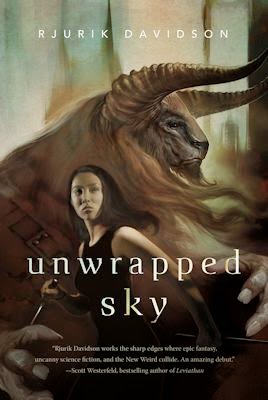 
As a writer, I’m best known for Caeli-Amur, the city in my novel, Unwrapped Sky, which seems to have captured the imagination of some readers. As a result, I’m often asked about world building. How does one go about building a wonderful world?
Questions about world building tend to boil down into this one: how does one go about creating an original world, one that is fascinating and wonderful? For a SF writer, this question is of critical importance, because we’re always searching for what is known as the ‘sense of wonder.’ It’s part of the contract you enter into with the SF reader. They want their mind expanded; they want the thrill of the new and unexpected; they want what we don’t have in this mundane world of ours.
This question is not far from the unfairly maligned, ‘Where do you get your ideas from?’ Many writers respond to this with a groan, or in Harlan Ellison’s case, ‘From a story factory in Schenectady.’ But it’s actually a legitimate inquiry. The question is one about process: How do you go about constructing a story? What is your creative method?
For me, world building is a process of combination. Let’s take Caeli-Amur as an example. In that city, I have combined several elements that are not usually united. The city has a classical feel, derived from ancient Greece and Rome. There is a ruined forum. There are mythical creatures: Minotaurs and Sirens. That’s all easily imaginable, but it’s not yet a wonderful city. Let’s give it a twist. Let’s combine it with something we usually wouldn’t think of: it’s also an industrial city, something like Turin in the 1920s. There are steam trams running along the streets, workers in overalls toiling in a factory quarter.
Just by combining these two elements, cribbed from the real world, we create interesting contrasts. The imagination can go in several directions: ancient Minotaurs outlined against smoky factories; Sirens riding on steamboats. As simple as that, we have the sense of wonder. It’s not bad, but it’s not really rich yet.
So Caeli-Amur has several more elements combined with these first two. What if these classical creatures came from a fallen classical world? So far so good, but let’s make it unexpected. What if that world was one of more-advanced technology, a kind of utopia? Here we’re blending in science fiction elements into what we already have. So we have lost technology, which no one understands anymore. Now we have a third unexpected dimension, and history to go along with the city.
It’s important not to fill in all the blank areas though. World building should not be an encyclopedic process. You must give the reader a chance to fill in the empty spots with their imagination. There’s nothing scarier, for example, than a monster only half-described. There must be some information offered, so the reader has something to hold on to. But don’t describe it all. The reader will fill in the blanks from their own unconscious. They will provide what is scariest to them. This is an affect you can’t get anywhere near. Let them scare themselves. This is true of all world building. Combine unexpected elements, but leave space for the reader to fill in the blanks.
Let’s try some now: the Vietnam war in which magic is real; China in the 1920s with a steampunk aesthetic; a bureaucratic society like the Soviet Union but set in a future alien world. Three combinations. Perhaps they have promise, perhaps not.
What combinations interest you the most? Rjurik Davidson has been an Associate Editor of Overland magazine, as well as a writer of short stories, essays, screenplays and reviews. His fiction has been published in Postscripts, Years Best Australian Science Fiction and Fantasy, Volumes One, Two and Four, Australian Dark Fantasy and Horror 2006, SciFiction, Aurealis, Borderlands and elsewhere. PS Publishing published a collection of short stories, The Library of Forgotten Books, in 2010. He has been short-listed and won a number of awards.