Interview with Brian McClellan, author of The Powder Mage Trilogy, and Giveaway - May 28, 2014


Please welcome Brian McClellan to The Qwillery. The Crimson Campaign, the second novel in The Powder Mage Trilogy, was published on May 6th by Orbit. 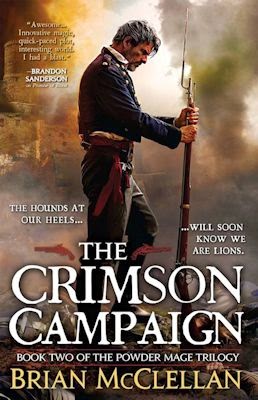 TQ:  Welcome back to The Qwillery. Your new novel, The Crimson Campaign (Powder Mage Trilogy 2), was published earlier this month. Has your writing process changed (or not) from when you wrote Promise of Blood (2013) to The Crimson Campaign? What is the most challenging thing for you about writing?

Brian:  Thanks for having me back!

The writing process did change. Crimson Campaign was the first novel that I wrote under contract. This meant I now had deadlines, an editor to report to, and agent to keep in the loop. This is all opposed to Promise of Blood, where I could take as much time as I wanted and had no outside force to report to.

I tend to write intuitively. Sporadically. This doesn't gel well with deadlines. If a scene isn't working I have a hard time going on ahead, and will often set aside my writing for days or even weeks while I try to figure out exactly where the book is going. I hate the phrase "wait for inspiration to strike" because it implies you're not in control of your own world, but that is literally what I have to do at times. Let me tell you, agents don't like hearing about that when you're closing in on a deadline and still have half a novel to write.

TQ:  What do you wish that you knew about book publishing when Promise of Blood came out that you know now?

Brian:  I wish I knew how uncertain the industry really is. No one really knows how a book is going to do until it hits the shelves. They can guess, of course, which is where they get the numbers for advances and marketing budget and all that. But it's not a lot more than an educated guess among a bunch of experienced people. No guarantees.

Okay, on second hand, I don't think I would have wanted to know that. It was nerve-racking enough to have my first book come out.

TQ:  Tell us something about The Crimson Campaign that is not in the book description.

Brian:  I had always kind of wanted to do a work that was based on Xenophon's Anabasis. It's a true story of a Greek mercenary company stranded in enemy territory and having to fight their way back home. The Crimson Campaign isn't as huge in scope as that (I had envisioned this Anabasis¬-inspired work as a whole series), but it has a lot of those elements to it.

TQ:  Please give us one or two of your favorite non-spoilery lines from The Crimson Campaign.

Brian:  This might be a cheat, but my favorite line often ends up on the front cover: "The hounds at our heels will soon know we are lions."

TQ:  What kinds of research did you do for The Crimson Campaign beyond that for Promise of Blood?

Brian:  My research rarely goes beyond Wikipedia, to be honest, and I can't remember anything specific to Crimson Campaign that I hadn't already had to learn or figure out for Promise of Blood.

TQ:  Which character in the The Powder Mage Trilogy (so far) has surprised you the most? Who has been the hardest character to write and why?

Brian:  I think Bo has surprised me the most. He was meant to be a bit of a throw-away character, and he wound up being the most fun to write. That shows with his extra screen time in Crimson Campaign.

The hardest character is definitely Nila. She doesn't have a lot of screen time in Promise of Blood and only a bit more in Crimson Campaign, nor was she meant to. I knew from the beginning that her story was going to be important, and I had some idea why, but I wasn't 100% sure what her journey would be. I'm glad to say that changed as things went along and by Crimson Campaign I knew her destiny. Still, she winds up being ignored by a lot of readers because of her lesser screen time.

Brian:  I grew up reading and loving epic fantasy. When I decided I wanted to be an author, I knew that was the genre I wanted to write in. I like the scope of it, and how it can deal with both personal, human relationships and world-shaking events. I like the good versus evil aspect (though I do ignore that trope to a certain extent in my own books).

To me, flintlock fantasy is just epic fantasy taken to the logical conclusion of a magical world entering its industrial revolution. It's meant to be epic. It's meant to be a successor to Jordan and Eddings and all those guys I loved as a kid. I hope that readers see it as epic fantasy and not as a separate genre entirely.

TQ:  The 3rd and final novel in The Powder Mage Trilogy, The Autumn Republic, will be published in February 2015. Please give us a sneak peek of what to expect. No spoilers, please!

Brian:  Giving a sneak peek without spoilers is a little difficult! But let's see...

The war escalates. The fighting becomes more personal. The enemy shows his true colors. Mistakes are made. Friends become foes and foes become friends. People die. A republic is born.

TQ:  Will you be writing more in the Powder Mage world?

Brian:  Yup! I'm under contract for another three books in the same universe. These ones will be set in Fatrasta ten years after the end of The Autumn Republic. We'll see a lot of new faces and several familiar ones, and the emergence of a new world power that threatens even the Nine from half a world away.

I'm also working on more Powder Mage short fiction to self-publish. I finished the first draft of a new novella just the other day and I'm hoping to have it out sometime in June.

Brian:  Thanks again for having me!


The Crimson Campaign
The Powder Mage Trilogy 2
Orbit, May 6, 2014
Hardcover and eBook, 608 pages 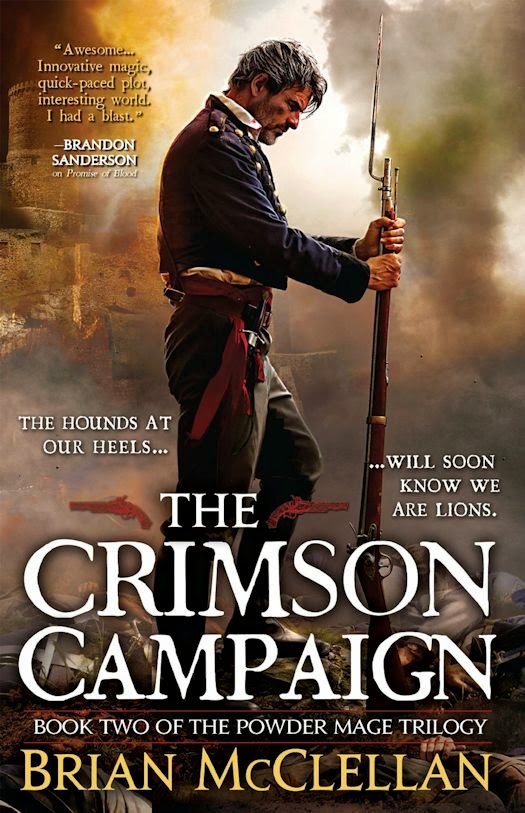 When invasion looms...
Tamas's invasion of Kez ends in disaster when a Kez counter-offensive leaves him cut off behind enemy lines with only a fraction of his army, no supplies, and no hope of reinforcements. Drastically outnumbered and pursued by the enemy's best, he must lead his men on a reckless march through northern Kez to safety, and back over the mountains so that he can defend his country from an angry god, Kresimir.

But the threats are closer to home...
In Adro, Inspector Adamat only wants to rescue his wife. To do so he must track down and confront the evil Lord Vetas. He has questions for Vetas concerning his enigmatic master, but the answers will lead Adamat on a darker journey.

Who will lead the charge?
Tamas's generals bicker among themselves, the brigades lose ground every day beneath the Kez onslaught, and Kresimir wants the head of the man who shot him in the eye. With Tamas and his powder cabal presumed dead, Taniel Two-shot finds himself as the last line of defense against Kresimir's advancing army.

In a rich, distinctive world that mixes magic with technology, who could stand against mages that control gunpowder and bullets? THE CRIMSON CAMPAIGN is the epic sequel to Brian McClellan's Promise of Blood. 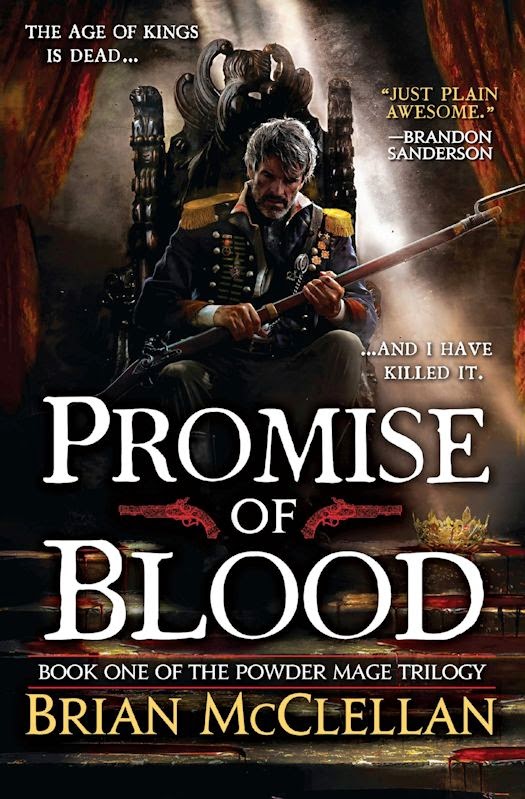 In a rich, distinctive world that mixes magic with technology, who could stand against mages that control gunpowder and bullets? PROMISE OF BLOOD is the start of a new epic fantasy series from Brian McClellan. 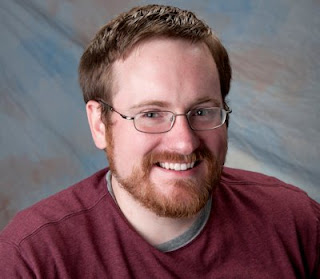 Brian continued to study writing not just as an art but as a business and was determined this would be his life-long career. He attended Orson Scott Card’s Literary Bootcamp in 2006. In 2008, he received honorable mention in the Writers of the Future Contest.

What:  One entrant will win a Trade Paperback copy of Promise of Blood (The Powder Mage Trilogy 1) by Brian McClellan from The Qwillery. This copy will not be purchased at Amazon.

Who and When:  The contest is open to all humans on the planet earth with a mailing address. Contest ends at 11:59PM US Eastern Time on June 7, 2014. Void where prohibited by law. No purchase necessary. You must be 18 years old or older to enter.