Excerpt from The Ninth Configuration by William Peter Blatty and Giveaway - May 2, 2014 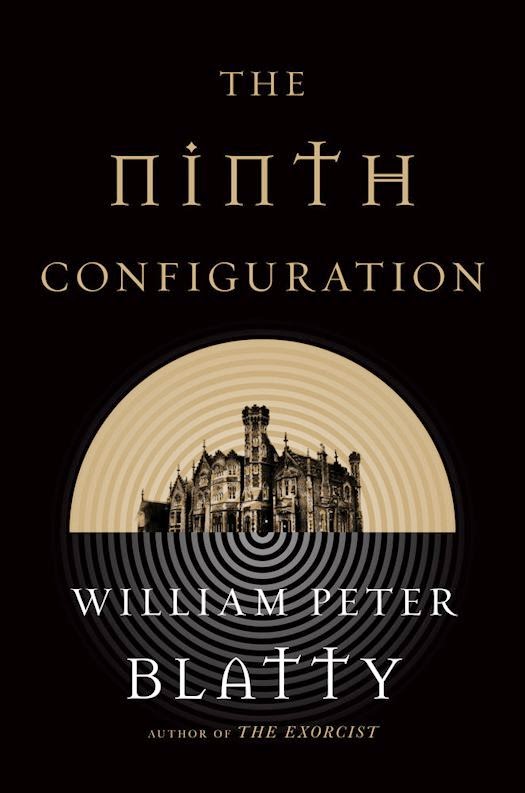 Eighteen, a secret military “rest camp” currently housing twenty-seven inmates, all officers who have succumbed to a sudden outbreak of mental illness. Have the men truly lost their minds, are they only pretending to be insane to avoid combat, or is some more sinister conspiracy at work?

Desperate for answers, the Pentagon has placed a brilliant Marine psychiatrist in charge of the base and its deranged occupants. A man of deep faith and compassion, Colonel Kane hopes to uncover the root of the men’s bizarre obsessions. But as Center Eighteen descends into chaos, Kane finds the greatest challenge may be his own buried demons. . . .

The basis of an acclaimed 1980 film (also known as Twinkle, Twinkle, “Killer” Kane), William Peter Blatty's The Ninth Configuration is a thought-provoking, blackly comic journey into the heart of madness—and the outer limits of belief.


The mansion was isolated and Gothic, massive, trapped in a wood, grotesque. It crouched beneath the stars under clustered spires like something enormous and deformed, unable to hide, wanting to sin. Its gargoyles grinned at the forest pressing in on it thickly all around. For a time nothing moved. Dawn sifted in. Thin fall sunlight pried at the morning entombed within the arborescent gloom, and fog curled up from rotted leaves like departing souls, dry and weak. In the breeze, a creaking shutter moaned for Duncan and a haunted crow coughed hoarsely in a meadow far away.Then silence. Waiting.

The voice of a man from within the mansion carried with firm conviction, startling a small green heron from the moat.
“Robert Browning had the clap and he caught it from Charlotte and Emily Brontë.”
A second man, angry, bellowed, “Cutshaw, shut your mouth!”
“He caught it from both of them.”
“Shut up, you crazy bastard! ”
“You don’t want to hear the truth.”
“Krebs, sound assembly!” the angry man ordered.
Then a military bugling shattered the air, ripping into the fog, and an American flag, fluttering defiance, leaped up a pole atop a spire. Twenty- seven men in green fatigues exploded like shrapnel from the mansion and hurtled out to the center of its courtyard, muttering and mumbling and crooking their elbows, dress- right- dress, in the forming of a military line. Above their denims some affected other dress: one wore a rapier and golden earrings; from the head of another bloomed a coonskin cap. Imprecations floated up from them like steam alive with sparks:
“Hillo ho ho, boys! Come, bird, come!”
“You know, I wish you’d douche; sincerely.”
“Sink the Bismarck !”
“Watch the elbow!”
A man with a shaggy mongrel dog in his arms burst into the center of the line. He bawled, “My cape! Have you seen my cape?”
“Hell, what’s a cape?” snarled the one with the sword. “Just fucking fabric.”
“Fabric?”
“Foolish fucking fabric.”
“What country is this?” asked a man at the end of the line.
A blond- haired man confronted them briskly. He wore tattered and dirty black Keds, his left big toe protruding through a hole; and over his fatigues he flaunted a New York University sweater: on the sleeve of one arm were letterman’s stripes, and on the other, a NASA astronaut’s patch. “Attention!” he commanded with authority. “It is I, Billy Cutshaw!”
The men obeyed, then stiffly raised their arms in the salute of ancient Rome. “Captain Billy, let us serve you!” they howled into the fog; then they dropped their arms and stood unmoving, hushed, like the damned awaiting judgment.
Cutshaw’s gaze flicked over them swiftly, flashing and mysterious, luminous and deep. At last he spoke:
“Lieutenant Bennish!”
“Sah!”
“You may take three giant steps and kiss the hem of my
garment!”
“Sah! ”
“The hem, Bennish, mind you, the hem! ”
Bennish took three steps forward, then cracked his heels together resoundingly. Cutshaw measured him with reserve. “Excellent form, Bennish.”
“Thank you very much, sir.”
“Don’t let it go to your fucking head. There is nothing more vile than hubris.”
“Yes, sir. You’ve said that many times, sir.”
“I know that, Bennish.” Cutshaw was probing him with his gaze, as though seeking out insolence and outrage, when the man with the sword bawled, “Here comes the fuzz!”
The men began booing as out from the mansion, in angry stride, marched the starched and militant figure of a major in the Marine Corps. Cutshaw scuttled into the line, and over the booing the man with the sword shouted out at the major, “Where’s my Ho Chi Minh decoder ring? I sent in the goddam boxtops, Groper; where the hell’s the — ”
“Quiet! ” Groper quelled them. His little eyes seared out from a face that was pummeled beef adorned with a crew cut. He was hulking and heavy of bone. “Fucking weirdo, yellow smart-ass college pricks!” he snarled.
“That says it,” muttered someone in the ranks.
Groper paced the rank of men, his great head lowered as though ready to charge them. “Who in the hell do you think you’re kidding with your phony little squirrel act? Well, bad news, boys. Tough shit. ’Cause guess who’s coming to take command next week! Can you guess, boys? Huh? A psychiatrist!” He was suddenly roaring, quivering with uncontrollable rage. “That’s right! The best! The best in uniform! The greatest fucking psychiatrist since Jung!” He pronounced the J.
Now he stood breathing heavily, gathering air and dominion. “Fucking combat- shirking bastards! He’s coming to find out if you’re really psycho!” Groper grinned, his eyes shining. “Isn’t that great news, boys?”
Cutshaw took one step forward. “Could we knock off this ‘boys’ shit, Major, please? It makes us feel like we’re cocker spaniels and you’re the Old Pirate in Tortilla Flat. Could we — ”
“Back into line! ”
Cutshaw squeezed a rubber horn in his hand the size of a baseball. It emitted a raucous, unpleasant sound.
Groper rasped, “Cutshaw, what have you got there?”
“A foghorn,” answered Cutshaw. “Chinese junks have been reported in the area.”
“Someday I’ll break your back, I promise you.”
“Someday I’m going to leave Fort Zinderneuf; I’m getting tired of propping up bodies.”
“I wish they’d clobbered you in space,” said Groper.
The men began to hiss.
“Quiet!” barked Groper.
The hissing grew louder.
“Yeah, hissing you’re good at, you slimy little snakes.”
“Bra-vo! Bra-vo! ” commended Cutshaw, leading the men in polite applause. Others added their praise:
“Good image.”
“Splendid, Groper! Splendid!”
“Just one more thing, sir,” Cutshaw began.
“What’s that?”
“Stick a pineapple up your ass.” Cutshaw looked away. He felt a premonition. “Somebody’s coming,” he said.
It was a prayer.

What:  Two entrants will each win a Trade Paperback copy of The Ninth Configuration by William Peter Blatty from Tor Books. US/CANADA  ONLY

Who and When:  The contest is open to all humans on the planet earth with a US or Canadian mailing address. Contest ends at 11:59 PM US Eastern Time on May 11, 2014. Void where prohibited by law. No purchase necessary. You must be 18 years old or older to enter.