Review: A Matter of Blood (The Forgotten Gods 1) by Sarah Pinborough 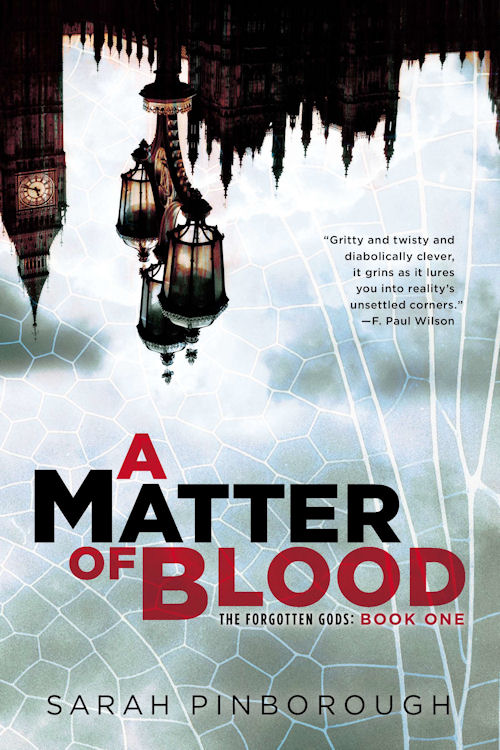 In a world steeped in darkness, a new breed of evil has fallen…

London’s ruined economy has pushed everyone to the breaking point, and even the police rely on bribes and deals with criminals to survive. Detective Inspector Cass Jones struggles to keep integrity in the police force, but now, two gory cases will test his mettle. A gang hit goes wrong, leaving two schoolboys dead, and a serial killer calling himself the Man of Flies leaves a message on his victims saying “nothing is sacred.”

Then Cass’ brother murders his own family before committing suicide. Cass doesn’t believe his gentle brother did it. Yet when evidence emerges suggesting someone killed all three of them, a prime suspect is found—Cass himself.

Common links emerge in all three cases, but while Cass is finding more questions than answers, the Man of Flies continues to kill...

A Matter of Blood, The Forgotten Gods: Book One deposits the reader directly into the unsettling streets of London via the life of homicide detective, Cass Jones. In the not so distant future, the underlying criminal element no longer lurks beneath the surface of the city. A depressed economy has resulted in a justice system where even the police are encouraged to take bribes to make ends meet. DI Jones is searching for clues in two high profile cases. The first, a gruesome serial killer who paints "Nothing is sacred" in blood on each of his victim's chests and the second, two innocent schoolboys gunned down in what seems to be a gang hit gone wrong. As Cass investigates these murders he receives a call informing him that his only brother, Christian, has committed suicide after murdering his wife and teenage son. Cass soon becomes a suspect in his family's deaths and he tries to unravel this cruel twist of fate while also dealing with his failing marriage. As he tries to decipher what really happened to his brother, he must revisit his past and the many unpleasant memories and mysteries that dwell there all the while trying to solve the multitude of mysteries in the present.

This smart police procedural mystery also overlaps into the world of dark fantasy. Since this was Book One in a series, I was a little concerned that the ending would leave me hanging. This was definitely NOT the case. Sarah Pinborough's London is so well described that the griminess of its streets is almost tangible. What I loved about this story was that much like a rogue wave,  he suspense built without my notice until CRASH!, it broke like thunder, swept me off my feet and left me gasping for air. Cass Jones is an anti-hero that struggles in his personal relationships and with other members of the police force. Frankly, he is not a very nice guy, he is however, an awesome detective who finds success through his analytical mind and dead-on gut instincts. He will take you on a journey that is often unexpected, but very enjoyable. This is not a book to take lightly, but one to savor as each page guides you to the exciting and unanticipated conclusion.


As you might have noticed neither Melanie nor I have written this review. Please welcome Trinitytwo as The Qwillery's newest reviewer. Trinitytwo is a longtime avid reader of genre fiction.We love to meet for coffee and discuss books!
Posted by Qwill at 8:30 AM

Labels: A Matter of Blood, review, Sarah Pinborough, The Forgotten Gods
Email ThisBlogThis!Share to TwitterShare to FacebookShare to Pinterest