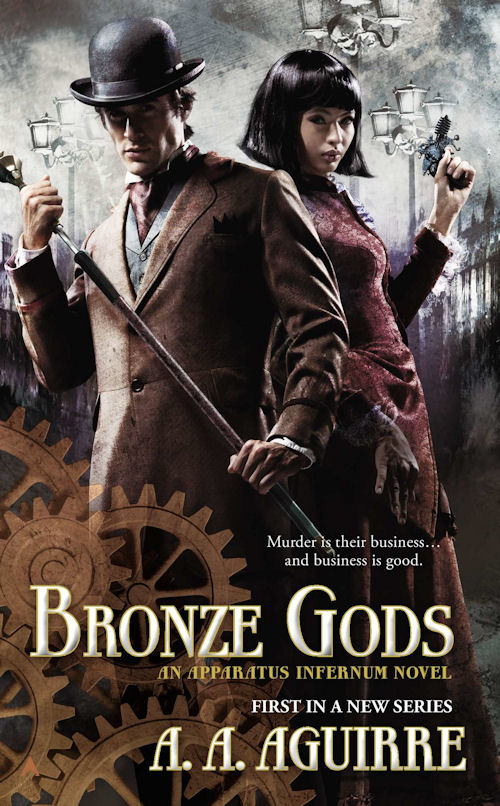 Danger stalks the city of steam and shadows.

Janus Mikani and Celeste Ritsuko work all hours in the Criminal Investigation Division, keeping citizens safe. He’s a charming rogue with an uncanny sixth sense; she’s all logic—and the division’s first female inspector. Between his instincts and her brains, they collar more criminals than any other partnership in the CID.

Then they’re assigned a potentially volatile case in which one misstep could end their careers. At first, the search for a missing heiress seems straightforward, but when the girl is found murdered—her body charred to cinders—Mikani and Ritsuko’s modus operandi is challenged as never before. It soon becomes clear the bogeyman has stepped out of nightmares to stalk gaslit streets, and it’s up to them to hunt him down. There’s a madman on the loose, weaving blood and magic in an intricate, lethal ritual that could mean the end of everything…

Bronze Gods is a police thriller with a twist. Young women of the founding families are being horrifically murdered and on the case are Mikani and Ritsuko of the Criminal Investigation Department. Can they find the killer before anyone else is murdered? The case of their careers may just be their last one.

I really enjoyed Bronze Gods mainly due to the strong characters. It has been a long time since lead characters have interested me so much. Mikani is your classic rogue but, like any good rogue, he does it with charm. His special talents help him solve cases but invariably leave him weak and injured. Does this stop him though? No way. Ritsuko, on the other hand, is strong and forthright. She isn’t your shrinking violet and thwarts the social norms as the only female in a ‘men only’ world. The alternate POV chapters allowed me, as the reader, to see both sides of the story through the eyes of these two characters. I liked how these two people grow to rely and care for each other as the story progresses. Nothing about this relationship is contrived and both characters, especially Mikani, are perplexed by their ever increasing attraction. Despite the supernatural context, this development feels realistic rather than the pair falling immediately in love with each other from the very start.

Aguirre has built an interesting world for the characters but it is not as well developed as they are. I inferred by the cover that the story would be set in a steampunk world but it was more fantasy with a hint of noir. I thought there were tiny bits of steampunk thrown in but not enough to classify the book in that genre. Nevertheless, the city of Dorstaad, rife with political, sexual and class segregation, is a great backdrop for the dark and moody story.

I was a tiny bit surprised at the very beginning to discover how much the history of the island of Hy Breasil and of the Ferishers played in the story. The important historical context isn’t even mentioned in the book’s summary. This revelation is one of the best surprises in the book. By reading the book summary you are quite naturally led to believe that Bronze Gods is purely a police led murder mystery. But it is so much more. The plot is multi layered; segregation based on race and sex is a prominent theme throughout. The murders are really just tools used by Aguirre to tell a story of love but mainly of loss - loss of social identity, loss of freedom and loss of power.

I feel that Aguirre is very clever in the pace of the book. There is just enough action and excitement as the resolution of the murder mystery comes to head while continually revealing more and more about the main characters. I was immediately drawn into Mikani and Ritsuko’s world while, at the same time, biting my finger nails at what was going to happen next. I find the series title a bit perplexing as I am still not too sure what the bronze gods are. Overall, Bronze Gods is a very strong start to what looks like a compelling series. If I had to sum my review into just a few words it would have to be ‘go buy this book….quickly!’