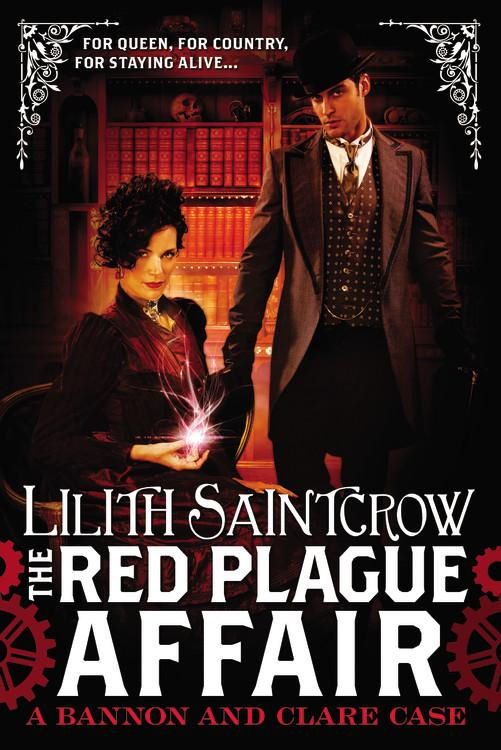 The service of Britannia is not for the faint of heart--or conscience...

Emma Bannon, Sorceress Prime in service to Queen Victrix, has a mission: to find the doctor who has created a powerful new weapon. Her friend, the mentath Archibald Clare, is only too happy to help. It will distract him from pursuing his nemesis, and besides, Clare is not as young as he used to be. A spot of Miss Bannon's excellent hospitality and her diverting company may be just what he needs.

Unfortunately, their quarry is a fanatic, and his poisonous discovery is just as dangerous to Britannia as to Her enemies. Now a single man has set Londinium ablaze, and Clare finds himself in the middle of distressing excitement, racing against time and theory to find a cure. Miss Bannon, of course, has troubles of her own, for the Queen's Consort Alberich is ill, and Her Majesty unhappy with Bannon's loyal service. And there is still no reliable way to find a hansom when one needs it most...

The game is afoot. And the Red Plague rises.

The Red Plague Affair is the second installment of the Bannon and Clare series and there is more adventure ahead for this unlikely pair. The story continues not long after the end of The Iron Wrym Affair (Bannon and Clare 1) with Clare and Bannon living their separate lives. Bannon has been summoned by Queen Victrix to find a renowned biologist while Clare is out searching for his arch nemesis, Dr. Vance. Things turn dire for Clare as in the midst of his pursuit of Dr. Vance and this puts our favourite odd couple back together. Bannon soon sets Clare to work with the task of helping her to find the elusive Dr. Morris. What they find however, is far worse than anything they could have imagined as Morris had developed a deadly plague and released it on the unsuspecting citizens of Londonium. It’s a race against time for Clare to find a cure and for Bannon to save the day. The odds are stacked against the oddest couple in this steampunk world.

I really liked The Iron Wrym Affair on my first read through but didn't think it held up on my second read of it. The things that bothered me in book 1 were cleared up in book 2, well almost! Clare and Bannon have a much closer relationship in The Red Plague Affair and there is more camaraderie between the two and evidence that their friendship has grown since they last worked together. I actually liked Bannon in this novel and thought that Saintcrow wrote her with more humanity than in the previous novel. Bannon was something other than just her curly hair, well trimmed outfits and sparkling jewels. There was also more revealed about Bannon’s past and how she ended up in the Collegia and as a Prime. Clare was his usual witty self and more of this novel was dedicated to the talented mentath. He was also used as the method of drawing out Bannon’s past which I thought was a good way of revealing her story. There were a few more tidbits about Mikal, Bannon’s Shield (aka bodyguard) but Saintcrow continues to tease me by not revealing who or what he is. For those that haven’t read The Iron Wrym Affair, much is made about Mikal’s mysterious past, about what he is and his motivation for working for Bannon. Even in this second installment she constantly questions the circumstances of how he came to work for her, where he came from and more importantly, whether she trusts him. There was a point in the novel that Mikal was about to confess to Bannon but she said she didn’t want to know. I was practically screaming at my Kindle ‘tell me, tell me, I want to know!’ There is the biggest tease at the end of the book about Mikal that makes me hope that Saintcrow doesn’t leave us hanging on much longer.

Saintcrow, really ramps up the tension in The Red Plague Affair as I was on the edge of my seat from the first chapter. There was a lot happening in this installment and even the scenes with just Clare on his own in Bannon’s house were full of intrigue. The discovery of the plague and quest to find a cure were subtle in their intensity, especially the scenes with Clare. There was a real feeling of the race against time to find the cure and it culminated into a truly exciting ending. I was a bit disappointed with The Iron Wrym but I thought that The Red Plague Affair more than made up for it. The plot was well constructed with the right mix of action, plot and intrigue. I think that Saintcrow needs to resolve the Mikal mystery soon as I think that the 'not knowing' could grow thin after a while. This is really nit picking as The Red Plague Affair is a dark and compelling read with a gorgeous cover!
Posted by Melanie at 8:00 AM