Please welcome Delilah S. Dawson back to The Qwillery!  Wicked as She Wants, the second Blud novel, was published on April 30, 2013. 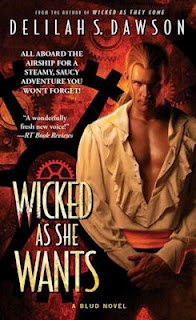 Delilah:  Thanks so much for having me back! I loved being part of the Debut Author Challenge last year.

TQ:   Tell us something about Wicked as She Wants (Blud 2) that is not in the book description.

Delilah:  There's a cameo from Criminy Stain. :) Princess Ahnastasia is kind of his celebrity crush.

TQ:  There are 2 novels and 2 e-novellas set in the Bludverse. Which were easier to write? The novels or the novellas?

Delilah:  Novellas are easier for me since they're 1/3 the size and much more straightforward, plot-wise. But there's always this vague sadness that you'll never get to hold a physical copy in your hands or see one in the bookstore.

TQ:  Which character has surprised you the most in the Blud series so far?

Delilah:  The ones that surprise me the most are the ones that just pop up from nowhere while I'm writing. Emerlie was completely unplanned and has been in almost every Blud story. In this book, the dandies were a surprise and are based on two of Atlanta's best dressed steampunk guys. My subconscious loves to play tricks on me.

TQ:  You live in the world you've created in the novels/novellas. What do you do there?

Delilah:  I do tricks on the backs of bludmares in Criminy's caravan. :) I might start up the first flying trapeze, too. I'm a Bludman, of course.

TQ:  What do you wish you'd known when the 1st book came out that you know now?

Delilah:  To be quite honest, when I wrote the first book, I was unaware that many people consider the word "gypsy" to be an ethnic slur. Since writing Wicked as They Come and even Wicked as She Wants (which was written a year ago), I've become far more sensitive to the fact that gypsies might seem like a fun trope in a book but are also a people who have been persecuted. I plan on running an apology in the Acknowledgments of book 3, and if any of my readers have been disappointed in my use of the word "gypsy", I apologize.

TQ:  Which of your prior jobs prepared you best for being a writer?

Delilah:  I have an art degree and had a career in non-profit arts centers, running galleries and art education programs. I was always the one who wrote the press releases and copy for class descriptions and did copyediting on all the marketing materials, so writing was a big part of my life. I also worked in a haunted house, which taught me a lot about timing and making people pee themselves.

TQ:  Are there any other genres or subgenres in which you would like to write in addition to Paranormal Romance?

Delilah:  I have a creepy paranormal YA called SERVANTS OF THE STORM that will be out with Simon Pulse next year. And I'm working on a straight-up noir-ish scifi story with a male protagonist. And I've written some MG, too. I want to write ALL THE THINGS!

Delilah:  I just finished the first draft of Blud book 3, WICKED AFTER MIDNIGHT, so I've got a lot of editing to do on that one. My next round of SERVANTS OF THE STORM edits is on its way to my house. My third Blud e-novella, THE DAMSEL AND THE DAGGERMAN, has been turned in to my editor but was moved to January 2014. And in June, I might actually get to work on something new.

Delilah:  Thanks so much for having me! I hope y'all enjoy WICKED AS SHE WANTS!  ♥ 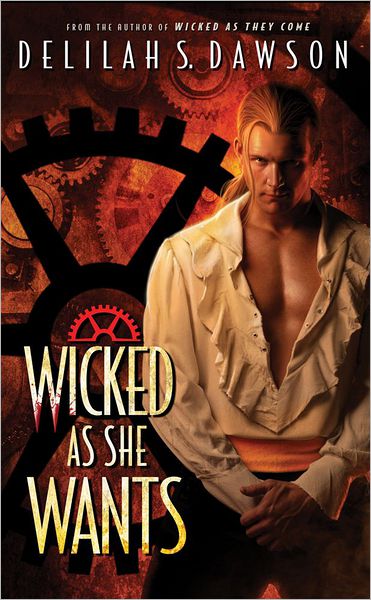 The second book in the darkly tempting Blud series, featuring a vampire princess who embarks upon a dangerous journey to claim what is rightfully hers.

When Blud princess Ahnastasia wakes up, drained and starving in a suitcase, she’s not sure which calls to her more: the sound of music or the scent of blood. The source of both sensations is a handsome and mysterious man named Casper Sterling. Once the most celebrated musician in London, Sangland, he’s fallen on hard times. Now, much to Ahna’s frustration, the debauched and reckless human is her only ticket back home to the snow-rimmed and magical land of Freesia.

Together with Casper’s prickly charge, a scrappy orphan named Keen, they seek passage to Ahna’s homeland, where a power-hungry sorceress named Ravenna holds the royal family in thrall. Traveling from the back alleys of London to the sparkling minarets of Muscovy, Ahna discovers that Freesia holds new perils and dangerous foes. Back in her country, she is forced to choose between the heart she never knew she had and the land that she was born to rule. But with Casper’s help, Ahna may find a way to have it all…. 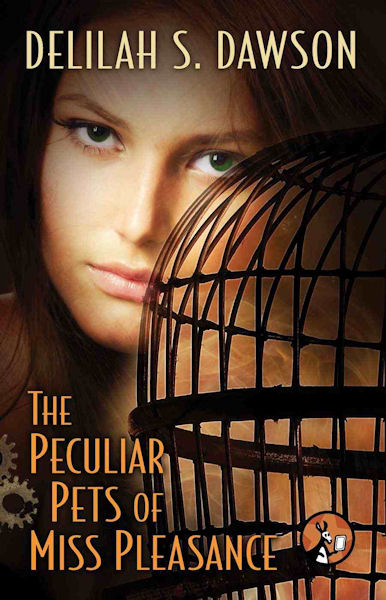 A lady with a penchant for pets meets a sexy fireman in this magical and saucy steampunk eNovella from the author of Wicked as They Come.

In a world ruled by blood, live pets are rare and kindness rarer still. London pet shop owner Frannie Pleasance has a mysterious way with animals and keeps her charges (and heart) locked in a veritable Eden. She thinks Casper Sterling is just another stray...until she takes in the troublesome lodger (and unwelcome suitor) and becomes the victim of a series of strange and dangerous occurrences.

When an unexplained fire threatens to destroy Frannie's carefully guarded world, firefighter Thom Maccallan is there to extinguish the blaze and help gather the lost creatures. The heat between Frannie and Thom begins to burn,but someone's still after the lady. Could it be Casper himself, or is Frannie’s new lodger just another victim of fate? Will they be able to figure out who's pursuing Frannie—and stop them—before she loses everything? 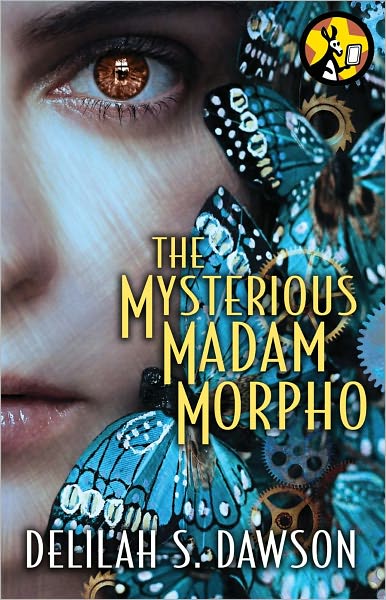 Taking place after Wicked as They Come, this original eBook features a mysterious lady and a reclusive mechanical genius who find love and danger in a traveling circus.

An elusive woman arrives at Criminy’s doorstep with a steamer trunk, begging for a position in the caravan to perform her unique new act. She opens her trunk to reveal a menagerie of brilliantly colored butterflies. The woman, who calls herself Madam Morpho, is on the run from a dark past in London, where she was forced to leave her equipment behind and abscond with only her tiny performers. Playing a hunch, Criminy hires Madam Morpho on the spot. Taking her down to meet Mr. Murdoch, the reclusive talented engineer who keeps the carnival’s clockworks running, Criminy instructs them to work together to design and build a groundbreaking new circus for the butterflies. Amid the magical ambiance of the circus and the hint of danger from Madam Morpho’s pursuers, she and Mr. Murdoch soon find that their scientific collaboration has produced chemistry of a more romantic kind. 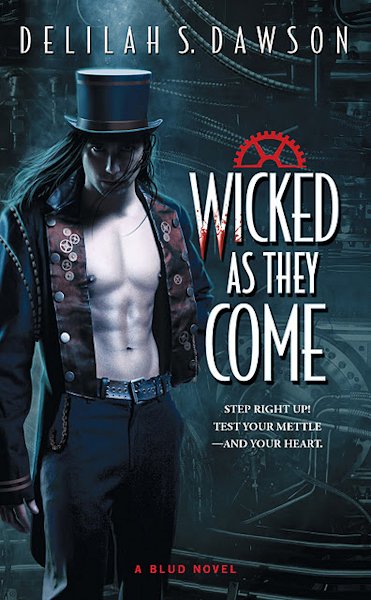 Have you ever heard of a Bludman? They’re rather like you and me—only more fabulous, immortal, and mostly indestructible. (They’re also very good kissers.)

When Tish Everett forces open the ruby locket she finds at an estate sale, she has no idea that a deliciously rakish Bludman has cast a spell just for her. She wakes up in a surreal world, where Criminy Stain, the dashing proprietor of a magical traveling circus, curiously awaits. At Criminy’s electric touch, Tish glimpses a tantalizing future, but she also foresees her ultimate doom. Before she can decide whether to risk her fate with the charming daredevil, the locket disappears, and with it, her only chance to return home. Tish and Criminy battle roaring sea monsters and thundering bludmares, vengeful ghosts and crooked Coppers in a treacherous race to recover the necklace from the evil Blud-hating Magistrate. But if they succeed, will Tish forsake her fanged suitor and return to her normal life, or will she take a chance on an unpredictable but dangerous destiny with the Bludman she’s coming to love?

Delilah has a Blud story in the upcoming Carniepunk anthology, which is out on July 23, 2013. And coming in January 2014 - The Damsel and the Daggerman (a Blud eNovella).

Delilah S. Dawson is a native of Roswell, Georgia and the author of the paranormal romance Blud series for Pocket, including WICKED AS THEY COME and WICKED AS SHE WANTS and two e-novellas, THE MYSTERIOUS MADAM MORPHO and THE PECULIAR PETS OF MISS PLEASANCE. Her short story THE THREE LIVES OF LYDIA will be in Gallery's Carniepunk anthology in July 2013. Her first YA, a creepy paranormal called SERVANTS OF THE STORM will be available in 2014 from Simon Pulse. RT Book Reviews has called her "a wonderfully fresh new voice!" and "on the fast track to the top of the genre!" and awarded WICKED AS SHE WANTS the May Seal of Excellence.

Delilah is a member of the Romance Writers of America and the Georgia Romance Writers and is Associate Editor at www.CoolMomPicks.com and www.CoolMomTech.com. She's a geek of all trades, a synesthete, and the sort of person who saw Spawn in the theater and made other people angry by laughing. Find her online at www.delilahsdawson.com. Bring cupcakes.

Labels: Blud, Carniepunk, Delilah S. Dawson, Interview, The Mysterious Madam Morpho, The Peculiar Pets of Miss Pleasance, Wicked as She Wants, Wicked as They Come
Email ThisBlogThis!Share to TwitterShare to FacebookShare to Pinterest