SPFBO Finalist Review: We Ride the Storm by Devin Madson 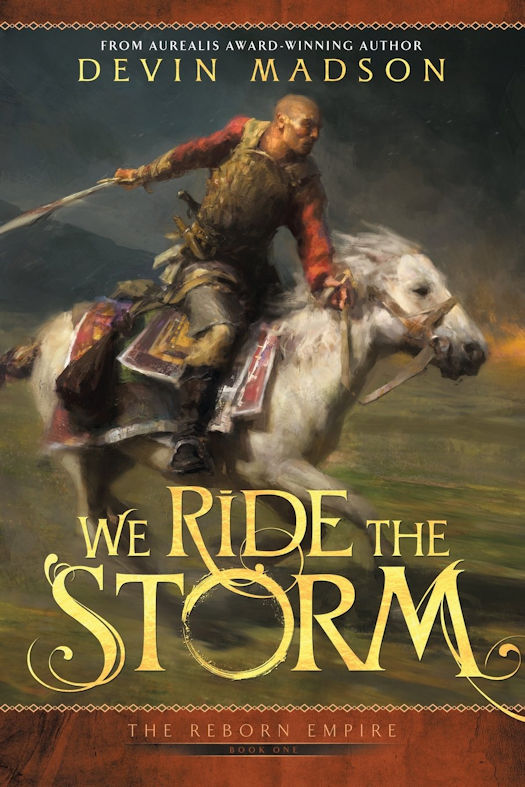 War built the Kisian Empire and war will tear it down. And as an empire falls, three warriors rise.

Caught in a foreign war, Captain Rah e’Torin and his exiled warriors will have to fight or die. Their honour code is all they have left until orders from within stress them to breaking point, and the very bonds that hold them together will be ripped apart.

Cassandra wants the voice in her head to go away. Willing to do anything for peace, the ageing whore takes an assassination contract that promises answers, only the true price may be everyone and everything she knows.

A prisoner in her own castle, Princess Miko doesn’t dream of freedom but of the power to fight for her empire. As the daughter of a traitor the path to redemption could as easily tear it, and her family, asunder.

As an empire dies they will have to ride the storm or drown in its blood.

Devin Madson’s We Ride the Storm is a complicated novel, with each chapter focusing on one of three major characters. There is Captain Rah e'Torin, a Levanti warrior and captain of the Second Swords of Torin, who have been enslaved by the Chiltaen. Cassandra Marius is a Chiltaen assassin whore who has a separate person in her head. Finally, Princess Miko is the bastard daughter of a traitor but has been accepted as heir to the Kisian Emperor despite her parentage.

For years there has been peace between the Kisian and Chiltaen empires, and Miko has been offered to the Chiltaen duke in marriage to maintain that peace. But Miko’s twin brother Tanaka decides to take over the Kisian Empire and begins conspiring with the Chiltaens to force a war that will help his coup. Cassandra is hired to kill the Duke before he reaches the Kisian capital, but when they are attacked other Chiltaen, she ends up protecting the Duke. In Kisia, Tanaka’s coup fails, the Empress takes over herself, and Miko and the emperor are forced to flee.

The complexities of the plot are what make the novel so interesting. Each empire is very different from the next, with the Levanti being more free and seemingly primitive, while the Kisians reminded me of Japanese culture. The characters are well-rounded, with Cassandra and her “passenger” being the most complex. I found the conflicts to be genuine and was intrigued to see how it all would end.