Interview with Simeon Mills, author of The Obsoletes


Please welcome Simeon Mills to The Qwillery as part of the 2019 Debut Author Challenge Interviews. The Obsoletes was published on May 14, 2019 by Skybound Books. 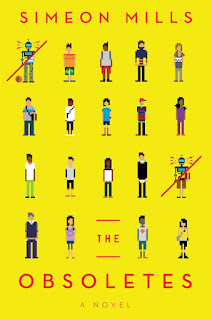 Simeon:  In fourth grade I had to write a story with illustrations, and I must have spent 90% of the time creating the “weapons chart,” the “armor diagram,” and the “map.” I know my character had loose spikes he could toss at the enemy as he made his escape. An axe. Probably a magic glove for punching things. Definitely a grappling hook.

Simeon:  I’m a plotter who is open to being a pantser when the situation is right—but otherwise planning ahead is an incredibly enjoyable part of my process. It starts by talking hikes on a Spokane mountainside with my notebook, jotting down ideas. At home, my office has huge bulletin boards I use to create plot diagrams and character sketches. Whether I’m starting a new project or attacking a novel revision, I build in days, probably weeks, for these pre-writing activities. However, once the writing begins, anything goes. I love the unexpected nature of seeing characters interact on the page. A scene might end entirely differently than I had planned—and that’s awesome. It’s when the characters start overriding my initial decisions that I feel I’ve nailed their perspectives.

Simeon:  I wrote The Obsoletes in the morning hours before heading off to my day job as a middle school English teacher. Having to rip myself away from the writing just when it was getting good, when my brain was swimming in coffee—when I was writing by the seat of my pants—was challenging in the moment, but probably beneficial to the overall draft. As Hemingway said, “The best way is always to stop when you are going good and when you know what will happen next. If you do that every day when you are writing a novel you will never be stuck.” Still, such intense morning writing sessions often left me drained and crabby for the school day—and if there are two things a middle school teacher needs, it’s energy and patience.

Simeon:  My wife is the novelist Sharma Shields. We met 17 years ago in the Montana MFA fiction program. We were both writing mostly realistic fiction then, and neither of us had yet published a short story. Slowly we began to experiment in magical realism, sci fi, modern-day mythology, and speculative fiction—and haven’t looked back. We are each other’s first readers. We balance taking care of the kids with giving the other time to write. Occasionally we play the role of literary therapist, having coffee in bed together on weekend mornings, talking through a problem of story. I can’t imagine the writing life without her.

TQ:  Tell us something about The Obsoletes that is not found in the book description.

Simeon:  Magic Johnson, the former Laker, is an influential character in the book—at least in the central processor of our protagonist, Darryl. If you were a basketball-obsessed, teenage robot in 1991, Magic would be a major influence on your life too.

TQ:  What inspired you to write The Obsoletes? What appeals to you about writing Science Fiction?

Simeon:  The choice to make the protagonists robots was a test of my own empathy. Could I see a robot as a person, the same as every human in my life? Rather than eventually arrive at an answer, The Obsoletes starts with one: Yes, Darryl Livery is a person. From the first page, he has a personality, faults, and desires. The only thing separating Darryl from the humans around him is the physiology of his body and the dangerous assumptions others make about him. When I started writing, I had assumptions too. But almost immediately Darryl and his brother Kanga took the reins of their voices, forcing me to rethink my own definition of personhood.

Science fiction is most appealing to me when it complicates our recognizable world. It makes us more curious, perceptive, skeptical of our assumptions. It can make us terrified of the hidden potential in everyday objects. Sci fi works best when 95% of what’s happening—especially a character’s emotions and reactions—is familiar.

TQ:  What sort of research did you do for The Obsoletes?

Simeon:  I bought a subscription to Newspapers.com and paged through every issue of the Lansing State Journal (the daily newspaper where I grew up, which would have also served the novel’s fictional town of Hectorville) from November 1991 through February 1992. It was important that the book reflect the local (and national, to a lesser extent) values and anxieties of this time and place. Memory provides many strong details, but there is nothing like the urgency of a front-page headline to reorient you with a moment, or reading about the major concerts coming to town, artists you’ve long forgotten.

I did almost no research on the viability of my robots. I wanted them to be casual and accepting of their bodies and minds (central processors), not to be amazed with their own functionality. Well, other than the ways that every teenager is amazed with their changing body. The how of the boys’ technology is explained in simple terms early in the novel. Beyond that, they don’t dwell on their own bodies. . . until they are forced to.

TQ:  Please tell us about the cover for The Obsoletes.

Simeon:  I love this cover! Will Staehle crushed it. I was a huge admirer of his work before, but what he created here surpassed my highest expectations. The 8-bit characters call to mind the technology in the early nineties. The slashes through the two characters, revealing them as robots, is an elegant communication of hidden identity and its inherent danger. I don’t know how many hours I’ve stared at the cover now, but I still find myself studying the “non-robots,” wondering what’s hiding behind those nondescript faces.

TQ:  In The Obsoletes who was the easiest character to write and why? The hardest and why?

Simeon:  Darryl Livery, the narrator, was the easiest character to write. When I knew for certain that he was both a robot and a person—that emotionally and psychologically he was just like me—his voice took off. His desires were clear from the beginning, as was his practical view of the world. I started writing him as a version of my young self, but he quickly became more complex than that. When his parents disappear, Darryl has to be a “mother” to his twin brother. He fits that role naturally.

The hardest character to write was Brooke Noon, Darryl’s love interest—but one with a complicated story of her own. Brooke was still developing her personality, still surprising me, long after Darryl and Kanga were fully formed on the page. She was strange from the beginning, and, being a middle school teacher, I have a lengthy catalog of strange with which to build a character like Brooke. But climbing inside the head of a volatile teenager is a delicate matter. Whatever “small” thing sets them off, these kids’ emotions are deep and unironic. Brooke is uncompromising, unapologetic, unpredictable. Darryl is fascinated by her—and terrified of her. I am too.

TQ:  Does The Obsoletes touch on any social issues?

Simeon:  The robots in The Obsoletes are not an allegory for a specific group of real-world people, but the hatred and xenophobia they experience, and the secrecy they are forced to maintain, very much exists in our society. I am eager to hear the connections readers make.

TQ:  Which question about The Obsoletes do you wish someone would ask? Ask it and answer it!

Definitely. But it’s not as simple and one of us being Darryl, the other being Kanga. I think there’s a bit of each of us in both characters. I’m thankful that, as kids, neither of us had to take on a parental role, as Darryl does. We could just be brothers. But to love someone that much is also to have an exaggerated power to hurt them. As the older one, I regret the careless ways I acted toward my brother at times, especially when we were Darryl and Kanga’s age. Still, it was around that time I realized he was the one person I couldn’t fathom losing in the world—even more so than losing our parents. When I once heard that a bully at our school pulled a knife on him, I wanted to murder that kid. A part of me still does.

TQ:  Give us one or two of your favorite non-spoilery quotes from The Obsoletes.

“What did human kids think about all day? What thoughts breezed through those bloody, carefree brains, instead of the millions of tiny calculations I performed pretending to be something I wasn’t? When people were just themselves, what was left to think about?”

Simeon:  Although publishing a book is a life-long dream come true—thank you, Skybound Books!—I am SO looking forward to jumping back into the creative process: on the hiking trails with my notebook and then in my basement office. I am a cartoonist as well, and I haven’t decided if the next book will be a graphic or a prose novel—there's one of each swirling around in my mind. I know I won’t feel quite whole again until I’m lost in one of the above.

The Obsoletes is a thought-provoking coming-of-age novel about two human-like teen robots navigating high school, basketball, and potentially life-threatening consequences if their true origins are discovered by the inhabitants of their intolerant 1980s Michigan hometown.

Fraternal twin brothers Darryl and Kanga are just like any other teenagers trying to make it through high school. They have to deal with peer pressure, awkwardness, and family drama. But there’s one closely guarded secret that sets them apart: they are robots. So long as they keep their heads down, their robophobic neighbors won’t discover the truth about them and they just might make it through to graduation.

But when Kanga becomes the star of the basketball team, there’s more at stake than typical sibling rivalry. Darryl—the worrywart of the pair—now has to work a million times harder to keep them both out of the spotlight. Though they look, sound, and act perfectly human, if anyone in their small, depressed Michigan town were to find out what they truly are, they’d likely be disassembled by an angry mob in the middle of their school gym.

Heartwarming and thrilling, Simeon Mills’s charming debut novel is a funny, poignant look at brotherhood, xenophobia, and the limits of one’s programming.

Simeon Mills is a writer, cartoonist, and teacher. His debut prose novel The Obsoletes was recently published by Skybound Books. His graphic novel Butcher Paper received a 2012 Artist Trust grant and is currently available from Scablands Books. Chapters of Butcher Paper have appeared in The Florida Review, RiverLit, Rock & Sling, The Pinch Journal, and Okey-Panky. He majored in architecture at Columbia University and received his MFA in fiction from the University of Montana. Mills teaches drawing at Eastern Washington University and middle school English in Spokane, Washington, where he lives with his wife and two children.