Please welcome W. M. Akers to The Qwillery as part of the 2019 Debut Author Challenge Interviews. Westside was published on May 7, 2019 by Harper Voyager. 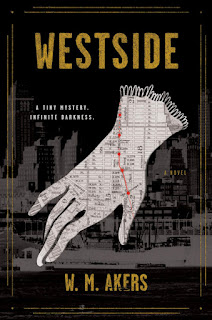 W. M.:  I wrote a twelve page “novel” when I was in sixth grade called, “The Story of Bowman,” which was a riff on the story of the boy who cried wolf. Basically, it was about the watchman for a village who keeps telling everyone that there are monsters in the forest. No one believes him, and then they all get eaten by monsters.

W. M.:  Plot, plot, plot! I have two young children, which means that the time I have to write is very restricted. If I didn’t outline everything meticulously, I would never get anything done.

TQ:  What is the most challenging thing for you about writing? How does being a playwright affect (or not) your novel writing?

W. M.:  The hardest thing for me, aside from finding the time to get real work done, is maintaining interest in a project over the long period that it takes to finish something. No matter how much I wish I could get it done faster, writing a book takes months or years, and there are always going to be days when I’m just not feeling it. Those are the days that it really feels like work. Being a playwright helps with this problem, actually, because I find that shifting media makes it easier to keep interested in my various projects. Work on a play for a little while, and suddenly the novel seems fresh again.

W. M.:  I take massive influence from the great prose stylists of the mid-Twentieth Century, with MFK Fisher being my particular favorite. Her sentences are as clear as spring water, and serve as a continual inspiration.

TQ:  Tell us something about Westside that is not found in the book description.

W. M.:  It has baseball in it! I’m a big baseball nerd—I even made a tabletop baseball game—and I couldn’t write a historical mystery without sneaking in as much baseball as my editor would allow.

TQ:  What inspired you to write Westside? What appeals to you about writing Historical Fantasy?

W. M.:  I’ve lived in New York since 2006, and from the first day I lived in the city, I found myself wondering what it was like before I got there. New York history is an exquisitely deep vein, and the more I learned about it, the more I found myself yearning for a version of the city that had existed long before I was born. Westside is my way of interrogating that nostalgic impulse. Why do we think old New York is so fascinating, and what ugliness existed there that we prefer not to think about?

TQ:  What sort of research did you do for Westside?

W. M.:  Old New Yorker essays were a great resource—I love you, Joseph Mitchell—and I leaned heavily on the frantic underworld histories of Herbert Asbury. But the New York Times archives were the most useful thing, as they provide a primary source window into how the period felt to the people who lived there. I had so much fun digging around the Times archives that I eventually turned that process into a newsletter all about weird stuff in the 1920s Times.

TQ:  Please tell us about the cover for Westside.

W. M.:  The jacket was designed by Owen Corrigan, and it is gorgeous. Westside’s hero, Gilda Carr, is a detective of tiny mysteries, and the image shows the missing white glove that kickstarts her adventure. Inside it is a map showing the fence that divides my imaginary Manhattan, and some of the most important locations in the novel: Washington Square, the docks, and all the darkest alleys of the West Village.

TQ:  In Westside who was the easiest character to write and why? The hardest and why?

W. M.:  I had a hell of a lot of fun writing Gilda Carr. Her voice came naturally to me, and whenever I sat down to work on the book after a long time away, I heard her speaking to me, impatient to start telling her story again.

TQ:  Which question about Westside do you wish someone would ask? Ask it and answer it!

W. M.:  What fictional location from the book would you most like to visit? The bazaar—the massive discount food market housed inside the ruins of old Penn Station, which was inspired by my beloved Park Slope Food Coop.

TQ:  Give us one or two of your favorite non-spoilery quotes from Westside.

W. M.:  I’m working on a new play, a new Deadball game, a new RPG and, most importantly, the sequel to Westside! Details to come later this year…

W. M.:  Thank you for having me. It was an absolute pleasure.

New York is dying, and the one woman who can save it has smaller things on her mind.

A young detective who specializes in “tiny mysteries” finds herself at the center of a massive conspiracy in this beguiling historical fantasy set on Manhattan’s Westside—a peculiar and dangerous neighborhood home to strange magic and stranger residents—that blends the vivid atmosphere of Caleb Carr with the imaginative power of Neil Gaiman.

It’s 1921, and a thirteen-mile fence running the length of Broadway splits the island of Manhattan, separating the prosperous Eastside from the Westside—an overgrown wasteland whose hostility to modern technology gives it the flavor of old New York. Thousands have disappeared here, and the respectable have fled, leaving behind the killers, thieves, poets, painters, drunks, and those too poor or desperate to leave.

It is a hellish landscape, and Gilda Carr proudly calls it home.

Slightly built, but with a will of iron, Gilda follows in the footsteps of her late father, a police detective turned private eye. Unlike that larger-than-life man, Gilda solves tiny mysteries: the impossible puzzles that keep us awake at night; the small riddles that destroy us; the questions that spoil marriages, ruin friendships, and curdle joy. Those tiny cases distract her from her grief, and the one impossible question she knows she can’t answer: “How did my father die?”

Yet on Gilda’s Westside, tiny mysteries end in blood—even the case of a missing white leather glove. Mrs. Copeland, a well-to-do Eastside housewife, hires Gilda to find it before her irascible merchant husband learns it is gone. When Gilda witnesses Mr. Copeland’s murder at a Westside pier, she finds herself sinking into a mire of bootlegging, smuggling, corruption—and an evil too dark to face.

All she wants is to find one dainty ladies’ glove. She doesn’t want to know why this merchant was on the wrong side of town—or why he was murdered in cold blood. But as she begins to see the connection between his murder, her father’s death, and the darkness plaguing the Westside, she faces the hard truth: she must save her city or die with it.

Introducing a truly remarkable female detective, Westside is a mystery steeped in the supernatural and shot through with gunfights, rotgut whiskey, and sizzling Dixieland jazz. Full of dazzling color, delightful twists, and truly thrilling action, it announces the arrival of a wonderful new talent. 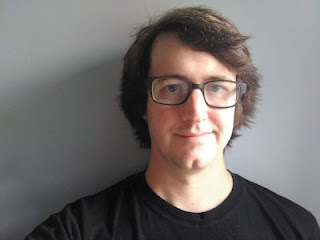 W. M. Akers is an award-winning playwright, Narratively editor, and the creator of the bestselling game Deadball: Baseball With Dice. Westside is his debut novel. He lives in Brooklyn, New York. Learn more about his work at wmakers.net.