Interview with Daniel Findlay, author of Year of the Orphan


Please welcome Daniel Findlay to The Qwillery as part of the 2019 Debut Author Challenge Interviews. Year of the Orphan is published on May 21, 2019 by Arcade Publishing. 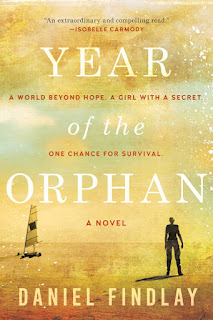 Daniel:  The first fiction I remember writing was at the age of about six. I would 'borrow' characters from authors like Enid Blyton and cast them in my own stories - it was my first foray into storytelling (and fanfic!)

Daniel:  A little of both. I have an idea of where I might like the story to end up but I let the characters show me how to get there. It's usually a surprise when I sit down to write and I try my best not to stifle their impulses. I also think about key scenes that give me a particular feeling (that I want to share or evoke) and then try to create interesting build ups to those moments.

Daniel:  Finding time is the neat answer to this question, as I juggle a full time job with my writing. The real and more complex answer is finding the discipline to continue working when there may not be much joy in it sometimes. I can count on one hand the writing sessions that felt successful this year but I have written something almost every single day.

Daniel:  I'm greatly influenced by other writers and readers, as well as film and music. I wrote Year of the Orphan listening to a lot of hip hop, and edited it to a very particular playlist of Australian music. Books like Riddley Walker and The Road both played a big part in my writing, as well as Australian classics like Obernewtyn and On The Beach.

TQ:  Describe Year of the Orphan using only 5 words.

TQ:  Tell us something about Year of the Orphan that is not found in the book description.

Daniel:  More than a little of it is based on documented historical fact!

TQ:  What inspired you to write Year of the Orphan? What appeals to you about writing dystopian fiction?

Daniel:  I was inspired by both historical events that occurred in Australia and also by a deep love of dystopian, post apocalyptic and speculative fiction. For me, exploring Australia's real history of nuclear testing through the lens of an apocalyptic novel was a way of sharing that real past with people who may not have otherwise known about it.

TQ:  What sort of research did you do for Year of the Orphan?

Daniel:  Before writing the novel I spent nearly a year reading everything I could find in the genre, particularly American classics that came out throughout the great fear of nuclear war from around 1950 through to the fall of the Soviet Union. Books like Alas, Babylon, After the Fall and A Canticle for Leibowitz, as well as more contemporary work. I was particularly interested in a the flavour of that early post-apocalyptic fiction when nuclear war was the big fear because it tied in strongly with Year of the Orphan.

After I had completed the first draft I also visited the ground zero of several of Australia's nuclear test sites. These secret places saw the detonation of nuclear bombs that in some cases were far bigger than Hiroshima and their existence in Australia is even to this day, largely forgotten. They are incredibly eerie and haunted places.


TQ:  Please tell us about the cover for Year of the Orphan.

Daniel:  This cover was influenced by both the film Mad Max and the tones of an Australian artist named Sidney Nolan who is most famous for painting pictures of one of our most notorious criminals (and folk heroes) Ned Kelly.

TQ:   In Year of the Orphan who was the easiest character to write and why? The hardest and why?

Daniel:  The Orphan was by far the easiest character to write because her perspective and experience is so clearly defined by what has happened to her. She knows quite clearly how she feels and will react in most situations so her responses are fun to write, and hopefully consistent. The most difficult character is one I can't share too much about without spoiling the story but suffice to say, their complexity and not being quite what they seem made them incredibly rewarding and challenging to write.

TQ:  Does Year of the Orphan touch on any social issues?

Daniel:  Year of the Orphan is first and foremost intended to be a great piece of fiction. It's unavoidable though that when it takes real history as a jumping off point that there will be threads of real social issues woven into the story. When nuclear weapons were tested in Australia both Indigenous Australians and our Army/Navy/Air Force servicemen and women suffered greatly through both ignorance and being deliberately being placed in harms way. I often hope that reading Year of the Orphan sparks an interest in the real-life events that inspired it.

TQ:  Which question about Year of the Orphan do you wish someone would ask? Ask it and answer it!

Daniel:  Well, to continue a theme - I wish someone would ask, how much of it really happened? The answer is, quite a lot! I feel there are many parallels and points of comparison that can be drawn between nuclear testing in the United States and Australia and I'm hoping that some American readers kindle an interest in this fascinating, frightening and often forgotten chapter of our shared history.

TQ:  Give us one or two of your favorite non-spoilery quotes from Year of the Orphan.

Daniel:  I'll always have a soft spot for the opening line; "There were a heat." For a long time it has been drummed into me the importance of a strong opening line and that one actually has a double meaning for me as it describes the opening scene but it also is the way you might describe a nuclear blast in it's first stages. It also gives you a faint hint that the language used in this book might be a little interesting.

Another line is "The ground sumetimes wept the blud of those Block had sent down". It's referring to how feared and dangerous one of my favourite characters is and I like the idea of using red earth to show how just how bloody things might get.

Daniel:  I'm about to visit the United States to hopefully see my book on shelves and I'm busily working on a follow up to Year of the Orphan. I''m very excited to think about such an Australian story reaching American readers and really hoping they enjoy the adventure!

The Road meets Mad Max in this stunning debut with a gutsy, charismatic young female protagonist—for fans of Station 11, The Passage, and Riddley Walker.

In a post-apocalyptic future where survivors scavenge in the harsh Australian Outback for spoils from a buried civilization, a girl races across the desert, holding her treasures close, pursued by the Reckoner.

Riding her sand ship, living rough in the blasted landscape whose taint she carries in her blood, she scouts the broken infrastructure and trades her scraps at the only known settlement, a ramshackle fortress of greed, corruption, and disease known as the System. It is an outpost whose sole purpose is survival—refuge from the hulking, eyeless things they call Ghosts and other creatures that hunt beyond the fortress walls.

Sold as a child, then raised hard in the System, the Orphan has a mission. She carries secrets about the destruction that brought the world to its knees. And she's about to discover that the past still holds power over the present. Given an impossible choice, will the Orphan save the only home she knows or see it returned to dust? Both paths lead to blood, but whose will be spilled?

With propulsive pacing, a rich, broken language all its own, and a protagonist whose grit and charisma are matched by a relentless drive to know, The Year of the Orphan is a thriller of the future you won’t want to put down.

Dan Findlay is the author of Year of the Orphan. Dan is a historian by training and a writer for kids by trade. Dan has over ten years' experience editing Australia’s leading youth magazines. He also has over a decade of freelance experience as a writer and photographer for Rolling Stone as well as contributing the odd music story to the Sydney Morning Herald and writing for a wide variety of other pop culture titles.