Guest Blog by Elizabeth Vaughan - You Ask Why I Write


Please welcome Elizabeth Vaughan to The Qwillery. Fate's Star, Prequel to the Chronicles of the Warland, was published on April 3rd. 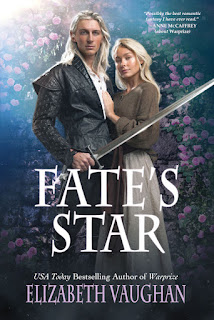 So, you ask why I write.

I write because I breathe.

I write because I can, because somehow I have been given a gift and I must not waste that gift, no matter how much I doubt myself or my abilities.

I write because there is nothing better than hearing from a reader that I made them laugh, or cry, or kept them up until the wee hours because ‘I could not put the book down’.

I write for that reader who wants/needs to escape this reality for a while, and shelter in a story.   For I believe that this gift, this spark is given by God, and that power flows through my words to that reader.   And I hope, I pray, that reader finds comfort in my words, strength in my characters, insight in my stories. I may never know how my words will effect someone, but God knows.   [Although I have noticed that while the Lord God, King of the Universe gave me the gift, He doesn’t show up to do any of the typing.]

There is a version of the Tempest starring Helen Mirren, filmed in Hawaii.   (Bear with me here).   In it, she plays a female Prospero, Prospera, Shakespeare’s sorceress.   In the first scene, she is standing on the edge of a cliff, summoning the tempest, wearing a wonderful cloak and holding a staff.

‘I have bedimm'd the noontide sun,
call'd forth the mutinous winds,
And `twixt the green sea and the azured vault
Set roaring war . . .    By my so potent art.’

That’s me when I write.   I am Prospera, the all-powerful, all-knowing sorceress, standing at the cliff’s edge, over-looking the sea.   Lightening flashes from my finger-tips as the sky obeys my every whim.   Earth and Sea and all the elements of Nature bow before me.   Characters live and die, and live again at my command, if I wish it so.   I raise my staff, and with a mere gesture the world bends to my every whim as the power flows through me . . . .

And then my cat jumps on the keyboard, the buzzer signals the dryer is done, and the smoke alarm goes off because I forgot dinner in the oven.   With a thump, I am back in this mortal realm with nothing more than words on the page . . . . and tears of joy in my eyes.

Because this is the closest I will ever come to wielding true magic.

That is why I write. 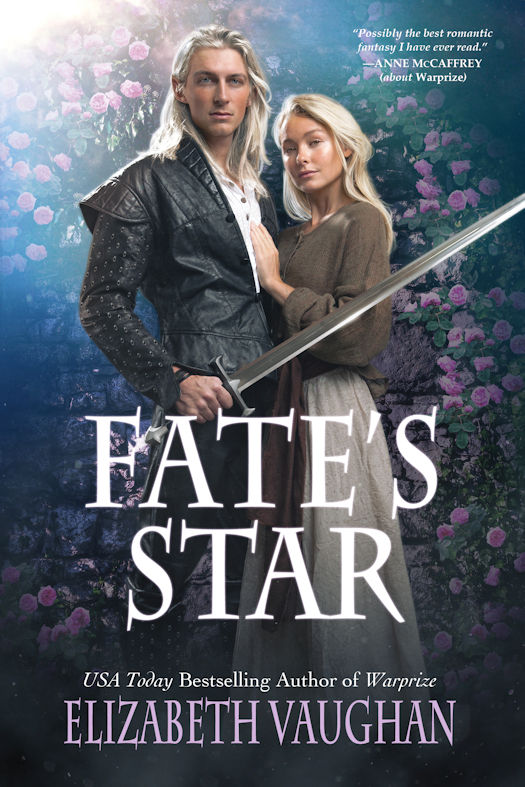 Five years before the events in Warprize and Destiny’s Star . . . .

Her family dead, her home destroyed, all she has left are her wits and her songs . . . .

When the flames of civil war rage across the Kingdom of Palins, Warna of Farentell has no choice but to flee to the neighboring Barony of Tassinic. The daughter of a wealthy merchant, raised to run a noble house in the hope of a good marriage, she watches her future burn with the rest of her homeland.

Elven Lord of a human Barony, betrayed and attacked by those he thought to trust . . . .

Verice of Tassinic has suffered the wounds of war, knowing loss and betrayal at the hands of those he trusted most. He buries himself in work and duty, behind emotional walls as high as those of his castle, rather than risk more pain. While dealing with a kingdom in political and economic turmoil, he 'rescues' Warna only to discover that the helpless human woman is anything but. Before he knows it, she is deep within the defenses of his heart, forcing him to confront his grief, his distrust, and the scars of his past . . . and maybe even steal his heart in the process.

Elizabeth Vaughan is the USA TODAY Bestselling Author of Warprize, the first volume of The Chronicles of the Warlands. Her father introduced her to sci/fi and fantasy, and she’s never looked back. She loves fantasy and romance novels, and has played Dungeons and Dragons since 1981, both table-top and the online game. The Chronicles of the Warlands stretches over eight books, with more to come. The latest in the series was Warsong, 2018. Beth also has a number of short stories published in various anthologies.