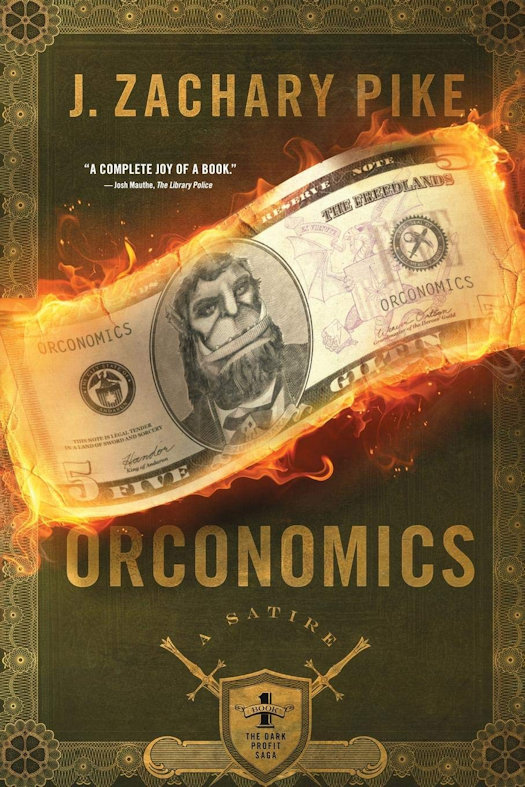 A disgraced Dwarven hero. A band of deadbeat adventurers. His last shot at redemption could get him killed.

If Gorm Ingerson really wanted to drink himself to death, he never should have helped the Goblin. When his good deed lands him in a bad contract, Gorm finds himself entangled in a quest that will pit him against business magnates, the king of the Freedlands, and a mad goddess trying to fulfill a suicidal prophecy.

But Gorm’s tarnished circumstances may be hiding a golden opportunity. If he and his half-baked party can overcome deep conspiracies and dark magics, he just might redeem himself and his career enough to be a professional hero once more.

Orconomics: A Satire is the first book in The Dark Profit Saga, a trilogy so funny it’s epic. If you like down-and-out heroes, sidesplitting misadventures, and ingenious world-building, then you’ll love J. Zachary Pike’s dark and delightful ribbing of high fantasy.

Buy Orconomics to join the campaign for a high-energy, hilarious fantasy adventure today!

Are goblins ruining your crops? Wyrm nesting in your shrubbery? You found a map to buried treasure but don't have time to find it? Look no further than the Hero's Guild to solve all your problems and to turn a tidy profit in the process. In Arth, speculating on the success of a hero's quest is big business. The success of your business and your shareholders can all depend on the heroics of a single individual. Gorm, used to be the best of the best, a dwarven hero with no rival until a job went bad and he lost his reputation, his clan and his livelihood. When he is offered the opportunity to redeem his fortunes he can't really say no....well the gun held to his head helped make that decision. The next thing he knows Gorm is joined but a motley crew of misfits, all of who have something to prove and something to gain. Orconomics is well and truly an epic adventure with heroes and villains galore, a tale of self discovery and a cracking good mystery to boot.

Orconomics has restored my faith in self-published fantasy. I absolutely loved this book. It was funny, the plot was original and the characters were well developed. When I describe this book as an epic I am not kidding, it really is. It took me ages to get through so many pages. It can be really challenging for me to stay interested in a book that is as long as Orconomics but Pike kept a solid pace that mixed action, adventure and storytelling.

Gorm Ingerson, this story's hero, has a great group of characters to interact with. Gorm is supported by a cast of characters that could only be described as supporting cast in your favourite dungeons and dragons-esque video game. The story is largely told from Gorm's POV, however, there are a few chapters where the story is told from other perspectives which all help to enrich the plot. While I am sure that many readers loved Gorm's goblin companion, Gleebek, it was actually the ogre Thane and his unrequited love that made me giggle the most. I feel that I need to warn you not to get attached to any character as Pike doesn't play it safe with his characters.

Hats off to Pike as he has written a truly original story that is drenched in sarcasm and wit. I never quite knew what would happen next which made Orconomics a real page turner. I can hardly wait to find out what happens next to Gorm and his friends. I loved this booked so much that I could easily give it a 9 out of 10. If you like fantasy, have a sense of humour and need a nice meaty read then be sure to get Orconomics on your TBR.