Review: Song of the Deep by by Brian Hastings 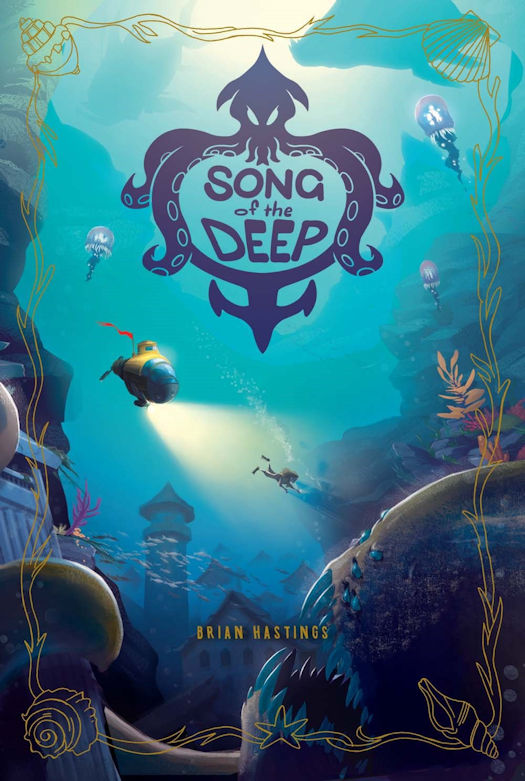 Twelve-year-old Merryn lives with her fisherman father in a little cottage by the sea. Each day, her father braves the tumultuous waves and returns home in time for dinner. One stormy evening, he doesn’t come back. Merryn has a vision that he’s been dragged underwater by a terrifying sea creature, and he needs her help. Determined to rescue him, Merryn builds a tiny submarine and embarks on a journey through the undersea worlds she’s only heard about in her father’s lullabies. As she faces the dangers and wonders of the world below the waves, she realizes that her father’s stories were all real.

Song of the Deep is a charming, nautical-themed fairytale. It's both a book based off a video game and a children's book. I haven't heard of the video game and I'm not a child so I'm not the target audience. Yet I still found moments of enjoyment out of the story. Merryn is a young girl who has to go save her father after he doesn't return home from a day of fishing. She does this by building her own submarine and along her journey discovers many friends and foes in a magical underwater world.

I really wish my kids were old enough to read this to them, but sadly they are just a few years too young to grasp some of the concepts and some of the darker moments of the book. I do plan to keep the book to read to them in the near future and maybe I'll update my review then.

The story moved along at a nice pace and was filled with plenty of adventure and was short and sweet. The character of Merryn held more depth than I would expect from a children's book.

Song of the Deep would be a great bedtime story. I think it would give children plenty of excitement and wonder as fuel for dreams. However, it's too simple to really tempt a parent into sneaking ahead on their own. A little heads up to parents, the book deals with the death of the mother, so use your own discretion.