Review and Giveaway - The Family Plot by Cherie Priest 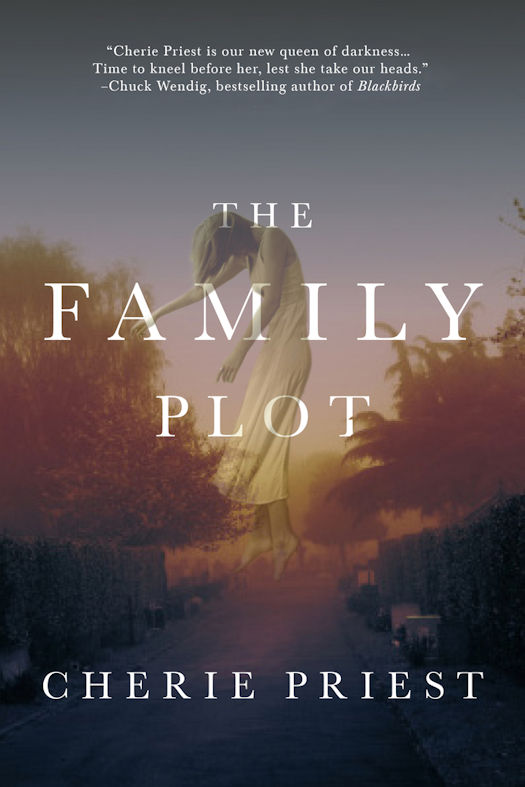 Priest continues to cement her reputation as a master of modern gothic with a haunted house tale that’s a slow burn with an utterly addictive finale. Though it feels like more could be done with the ghosts of the Withrow house, the living characters do more than their fair share of lifting with interactions that are charming and funny. That said, fans and new readers should walk away satisfied and just a little bit worried when in the house alone.

In The Family Plot, Dahlia Dutton and her salvage crew are given a last ditch job to wreck and salvage an especially tantalizing property. Ignorant of the house and Withrow family’s history, the crew soon find themselves haunted by a multitude of spirits. At first, the spirits are content to scare and pester, but as Dahlia uncovers more of the secrets the house has held for nearly a century, something dark and violent emerges — something that has squared all its rage on Dahlia Dutton alone.

Recently divorced, Dahlia Dutton works with her dad, Chuck, in their family's struggling architectural deconstruction business, Music City Salvage. Her job revolves around stripping old houses of antique fixtures, rare wood floorboards or stained glass windows before demolition. She's great at what she does, even though she finds these old homes charming and would prefer to see them saved from the wrecking ball and restored to their former glory.

When Chuck signs a contract with Augusta Withrow to professionally dismantle her family's estate, he assigns Dahlia and three crew members to tackle the job near the base of Lookout Mountain. Upon arrival at the isolated property, Dahlia feels like the house is speaking to her-- asking her to save it from its scheduled destruction. Reluctantly, she begins work, but upon seeing a flash of yellow amid some overgrown brush, she investigates. Dahlia uncovers a strange unmarked cemetery and shares her discovery with her co-workers. Soon she, and the other members of her crew, experience several strange spectral sightings. It seems the Withrow residence harbors more than one secret.

No doubt about it, Cherie Priest is a master wordsmith. Her descriptions of Dahlia's late night forays into spooky spaces were delightfully creepy. I was also impressed by the vividness of her otherworldly characters. Priest does an exceptional job of building suspense and delivering scares. I read The Family Plot in three days because the action propels itself at such a vigorous pace; I simply didn't want to put it down. Compelling, frightening, and macabre, Priest's writing gives me chills reminiscent of those I felt when reading Edgar Allen Poe.

Dahlia and her crew are believable characters who bicker and laugh together as any family might. I especially enjoyed her rocky relationship with her cousin Bobby and her obvious soft spot for his son Gabe. Their family dynamics ignite heated interactions that provide a welcome counterpoint from the unsettling paranormal activities.

Priest packs a wallop from start to finish, and I recommend this tale of a haunted house to teens and adults who enjoy a good scare. For the exceptionally brave, I'd suggest reading it alone and after dark. The Withrow family home and its ethereal inhabitants are the stuff of nightmares etched indelibly in the dark recesses of my memory. The Family Plot promises chills and thrills and it definitely delivers.

What:  Two entrants will each win a copy of The Family Plot by Cherie Priest from the publisher. US / CANADA ONLY

Who and When:  The contest is open to all humans on the planet earth with a US or Canadian mailing address. Contest ends at 11:59 PM US Eastern Time on September 28, 2016. Void where prohibited by law. No purchase necessary. You must be 18 years old or older to enter.