Interview with James Bennett and Review of Chasing Embers


Please welcome James Bennett to The Qwillery as part of the 2016 Debut Author Challenge Interviews. Chasing Embers was published on September 6th by Orbit. 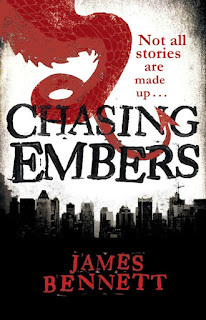 James:  Thank you. I started out young, inspired by films like Star Wars, comics like Conan and books like The Wizard of Earthsea. I view these things as my cornerstones, if you like. I still think bits and pieces of these influences show up in my work today.

James:  Oh, definitely a hybrid. I’ll sketch a loose plot, choose my themes and decide what the book is trying to say. Then when I sit down to write it, the book tends to decide those things for itself. The age old struggle. But flexibility is essential to a writer.

James:  Exposition. I’ll come right out and say it. You’re always learning and for me, one of those lessons appears to be the fine art of avoiding info dumps. I love to write action pieces and dialogue. If it was up to me I’d include exposition in a little pamphlet at the back of the book for readers to refer to. I’m learning. I hope I’m getting better.

James:  Too many to list. A wealth of fiction across genres, books, movies and comics. Life experiences. Travel. Somewhere in my teens my love of mythology met Stephen King and things kind of went boom. In terms of the Ben Garston novels, I wanted to take all these influences, from Tolkien to Le Guin to McCaffery to Barker et al and, well, punk them a little. I view Chasing Embers as mythpunk. Anything could end up in there. It’s a highly expansive theme.

James:  I’ll give you my elevator pitch: James Bond with dragons.

TQ:  Tell us something about Chasing Embers that is not found in the book description.

James:  Ben Garston was (apparently) a real person. He’s listed as either a criminal or a nobleman in a 16th century Mordiford document. No one at the time really seemed sure. I liked that ambiguity. The myth of the Mordiford Dragon is old and obscure, of course, but it’s where Chasing Embers took root. You walk in the woods above Mordiford and wonder what these people would be doing now. I do, anyway.

TQ:  What inspired you to write Chasing Embers? What appeals to you about writing Contemporary Fantasy?

James:  I have the greatest respect for secondary world-builders and it’s definitely something I’ll try one day. At the moment I’m interested in exploring this world and using monsters as a metaphor to reflect our modern issues, which of course you can do in a secondary world – and well – but I wanted to be up close and personal. I’ve read some reviews that pick up on the lack of humans in the novel, but to my mind, these are intensely human stories. That absence is deliberate.

James:  Who doesn’t love dragons? From Smaug the Magnificent to Toothless. Well, for one thing, I think a dragon comes at the top of the tree in the hierarchy of fabulous beasts. I felt an entirely humanoid character had been done brilliantly elsewhere (Jim Butcher, Kevin Hearne, Benedict Jacka etc.) and I’m the kind of writer who will always look to do something new. Dragons in human form aren’t new, however. In fact, the mythological idea is very old, from Medieval European tales right back to Ancient China and creation myths. The more I thought about it, the more the idea intrigued me. Imagine a dragon living now, here among us in human form? What would he/she be like? You can have a lot of fun with that. And I write primarily to have fun.

TQ:  What sort of research did you do for Chasing Embers?

James:  I read a lot of history and a lot of mythology. I tracked down the remnants of the Mordiford story (see what I did there?) and embarked on a study of North African myths, which is where I stumbled on Punt. The idea of this once paradisiacal realm was quite affecting and when that led to the link with Ancient Egypt, a story began to take shape.

TQ:  In Chasing Embers who was the easiest character to write and why? The hardest and why?

James:  Ben was the easiest. He’s perhaps the least like me, but the one I can most relate to.

Khadra and Ayan were the hardest. You’re looking out through eyes that you know you can’t ever really share and what they see is mostly painful. Hope is painful.

TQ:  Why have you chosen to include social issues in Chasing Embers?

James:  I grew up in South Africa and I’m aware of the vibrancy of African culture, which is every bit as rich and varied as western mythology. We’ve travelled in Botswana, Mozambique and Zimbabwe. Also I’ve witnessed the hardships faced by so many over there that we simply don’t face in the west. I found the idea of contrasting these worlds fascinating, to offer a wider perspective for readers. I didn’t grow up in a straight white world and I think (hope) that my stories reflect that. I think we need a wider perspective in literature now. We need wider eyes. Isn’t that what wonder is all about? And what is Fantasy if not wonder?

TQ:  Which question about Chasing Embers do you wish someone would ask? Ask it and answer it!

‘Will Rose McBriar be returning to this series?’

And answer: Maybe. But not in the next one. Just so no one hates me for it.

TQ:  Give us one or two of your favorite non-spoilery quotes from Chasing Embers.

James:  “The thing with myths is they never really die.”

James:  Well, I have some new short stories coming out from Fox Spirit Books later this year. There are actually already about 6 or 7 published spin-off stories from the Ben Garston series that I may flag up on my blog next week http://curia-draconis.blogspot.co.uk/ Then next year we have the follow up to ‘Chasing Embers’, which is a darker story, I think, although with several dollops of fiery action. Now we’ve established the Remnant world, I’m looking forward to the fun we can have in it. I’m looking forward to spending the winter somewhere quiet and remote and getting my head down with Book 3.

James:  My pleasure. Thank you for having me. 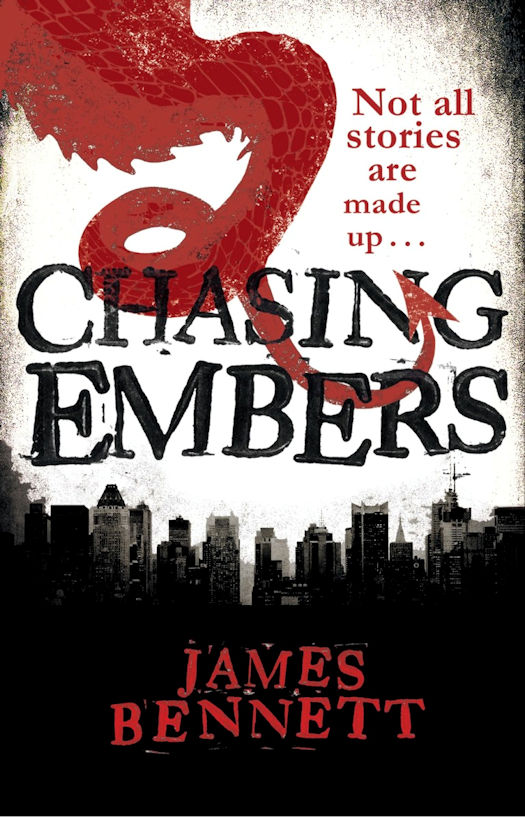 Behind every myth, there's a spark of truth...

There's nothing special about Ben Garston. He's just a guy with an attitude in a beat-up leather jacket, drowning his sorrows in a downtown bar. Or so he'd have you believe.

What Ben Garston can't let you know is that he was once known as Red Ben. That the world of myth and legend isn't just a fantasy, as we've been led to believe. And he certainly can't let you know the secret of what's hiding just beneath his skin...

But not even Ben knows what kind of hell is about to break loose. A centuries-old rivalry has just resurfaced, and the delicate balance between his world and ours is about to be shattered.

Chasing Embers is the first novel in the Ben Garston series by James Bennett. Ben Garston is hard-drinking, difficult and the last of his kind on Earth (a dragon). The reasons for that are clearly explained in the novel and were put in place during the reign of King John (the Magna Carta King John). It's fascinating.

While Ben is the main character, there are quite a few really well-done supporting characters including Ben's love, Rose McBriar, some unpleasant witches and more. There are many mythological beings and objects of power introduced in the novel. Something has happened which shakes the foundations of Ben's world, threatens Rose, and may mean the ruination of Earth. If Ben could only figure out what is going on.

I enjoyed watching Ben piece things together. He's very introspective and we get to share in his thoughts. He understands his flaws for the most part. He struggles with his dragon nature - hoarding treasures, treating women as damsels, etc. Bennett makes it easy to feel Ben's love for Rose and all the worries he has about being different than she is (i.e., not human) as well as the weight he feels from the many years he's been alive. Bennett also lets the reader know how Rose feels about everything in no uncertain terms. She's a very strong woman.

Bennett beautifully entwines various mythologies (Egyptian, Puntian, British) and adds his own spin to create a complex and detailed background for Chasing Embers. The novel had me looking up various elements of these myths that are given as fact in the novel with variations because myths seldom get it right. I knew nothing about a the Land of Punt before Chasing Embers. I love when a novel has me looking up and learning new things.

There is a tremendous amount of action in Chasing Embers - some explosions, destruction of buildings, and more. There is also humor and quiet moments... and torture. There are heartbreaking scenes set in the area of Africa that was the Land of Punt and serve as a catalyst for much of what happens in the novel. The climatic scenes are stunning, frighting, and exciting. Bennett's writing flows gracefully throughout. The novel does not end on a cliffhanger but does leave you wondering about some things.

Chasing Embers is a compelling Contemporary Fantasy with a very rich mythology, a terrific story and engaging characters. 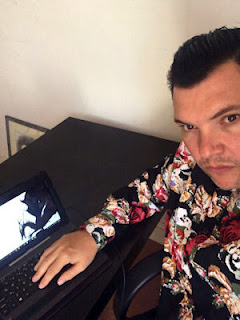 James Bennett is a debut fantasy author currently living in Wales. Born in England and raised in South Africa and Cornwall, his travels have furnished him with an abiding love of different cultures, history and mythology. He's had several short stories published internationally and draws inspiration from long walks, deep forests and old stones. Also the odd bottle of wine.