BLACK PANTHER by Ta-Nehisi Coates & Brian Stelfreeze is #1!
The Bestselling Series is Now a Bestselling Collection

New York, NY—September 23rd, 2016 — A new era has begun for the Black Panther – and the critics are hailing it as a hit! Now, the series that’s being called “important” (The Daily Beast), “the year’s biggest comic news” (Vulture) and “the best reason in years to start reading comics” (GQ) is being collected for the first time! BLACK PANTHER: A NATION UNDER OUR FEET BOOK ONE – the thrilling new series from MacArthur Genius and National Book Award Winner Ta-Nehisi Coates and acclaimed artist Brian Stelfreeze is available now wherever comics or books are sold!


[Watch BLACK PANTHER: A NATION UNDER OUR FEET BOOK ONE Trailer]

Marvel is proud to announce that the recently released collection has debuted on the New York Times Bestseller List, reached #1 on Nielsen BookScan and Amazon and continues to burn up the charts of Diamond Comic Distributors! If you haven’t read the series that everyone is talking about, now is the perfect chance to get caught up! This exciting volume collects Black Panther #1 - #4 along with a reprinting of the Panther’s very first appearance! Don’t miss BLACK PANTHER: A NATION UNDER OUR FEET BOOK ONE – available now!

BLACK PANTHER: A NATION UNDER OUR FEET BOOK ONE
Written by TA-NEHISI COATES
Art & Cover by BRIAN STELFREEZE
On-Sale Now! 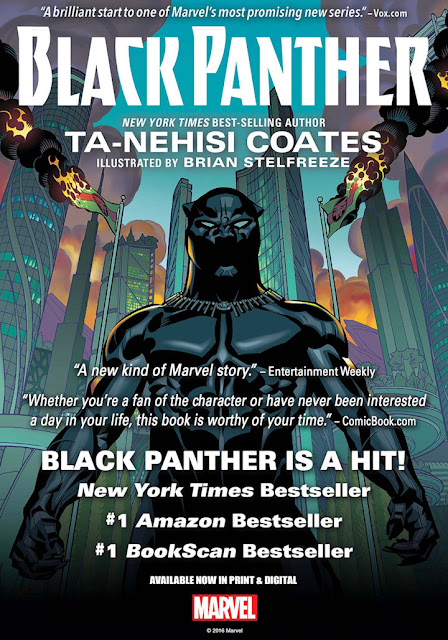 About Marvel: Marvel Entertainment, LLC, a wholly-owned subsidiary of The Walt Disney Company, is one of the world's most prominent character-based entertainment companies, built on a proven library of more than 8,000 characters featured in a variety of media over seventy years. Marvel utilizes its character franchises in entertainment, licensing and publishing. For more information visit www.marvel.com © MARVEL 2016
Posted by Qwill at 3:05 PM